For those inquiring, because of the way the Fossum Investigation was conducted it has required me to confirm several areas that have come to light from the available documents, so it will take longer than I anticipated…but I will get there.

Back in the day when local MSM were diligent about their responsibility to inform the Public about local government misconduct there would have been a series of investigative articles delving into the problems associate with Spokane County Jail not only the issues surrounding all of the recent jail deaths but also the background of the who, when, where, and why the problems exist. You don’t see that diligence anymore, although there are few exceptions. It is difficult to tell whether the lack of diligence is due to the deep budget cuts some of the local media like the SR has suffered over the years;

or it could be the theory that the Public’s interest these days isn’t with hard investigative news reporting, rather with fluff and puff “hyperlocal, digital journalism”.

One of the theories being bantered around is that the young energetic local reporters would like nothing more than to do real investigative reporting but pressure from the local political structure keeps it from happening. 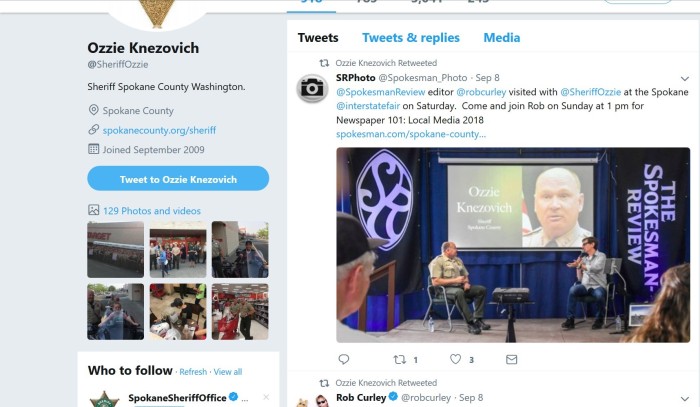 As far as the Fossum Report and the battle between Knezovich and McGrath is concerned maybe it was the original $806.60 price tag to get the Public Records that scared other media off. 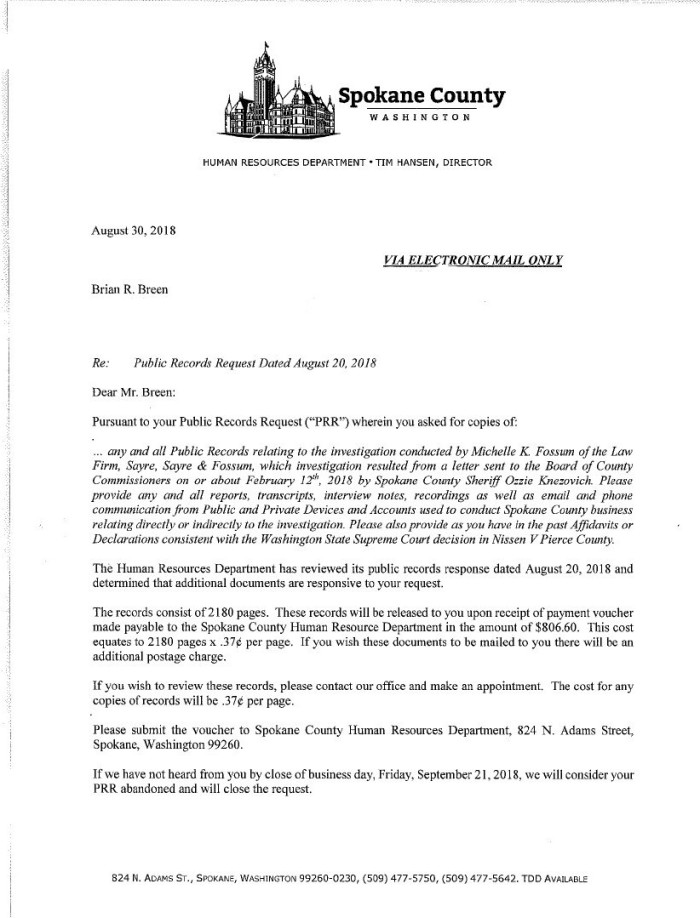 One of the more telling aspects of the Fossum notes is this one which involves an interaction between Spokane County Prosecutor Steve Kinn and Fossum which took place on 2/12/18. 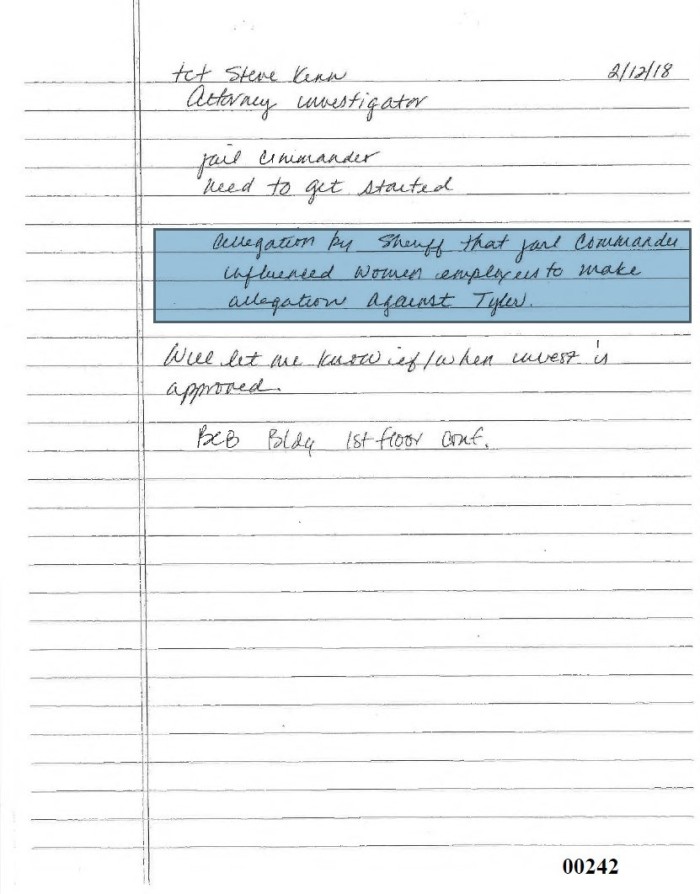 As you can quite clearly see Mr. Kinn recognized the Knezovich’s intent in requesting the BoCC to investigate was to bring forward Knezovich’s allegation that John McGrath influenced women employees to make allegations against his friend Phil Tyler. The significance of the “2/12/18” date on Fossum’s notes becomes evident when you read the engagement letter dated the following day. 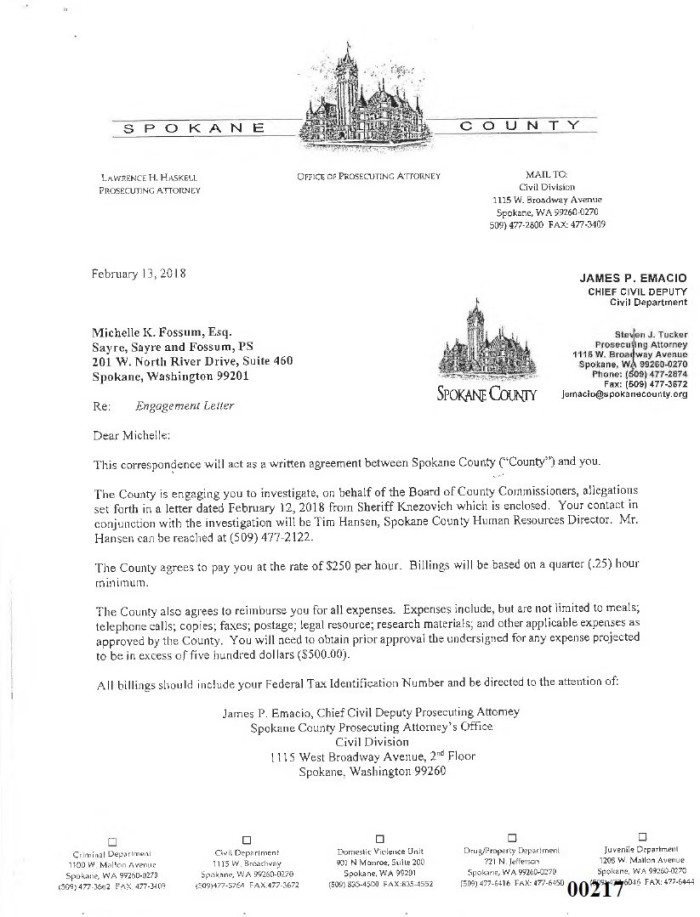 Unfortunately, the documents do not show exactly what the agreed upon “Scope of Work” was between the County and Ms. Fossum, but what they do show is a primary focus on Ozzie’s friend Phil Tyler and his interactions with Detention Staff throughout his career in Detention Services after he was transferred from “Juvenile Court Services” to “Sheriff/Jail” on 2/1/1999. That transfer could explain a lot of things regarding how Tyler made his way to the Spokane County Sheriff’s Office. 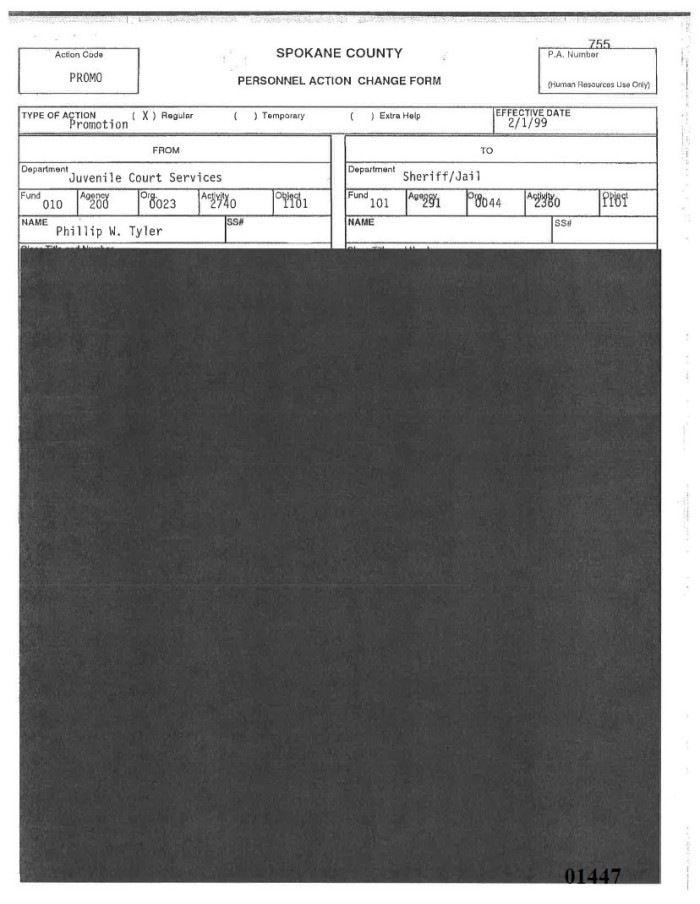 “And for the life of me, I can’t explain how this history got missed,” Knezovich said. “It’s all in records.”

Tyler’s personnel records regarding the transfer have been redacted (properly) so there is no way of telling whether or not the SCSO relied solely on the Juvenile Court Services background check or did their own. Whatever was the case as far as Tyler’s hiring is concerned when allegations arose regarding Tyler’s treatment of women on Ozzie’s Detention Staff one would think since the history was “all in records” Ozzie and his Investigators would have looked at the records.

It looks like Director McGrath, ain’t no dummy as Fossum’s notes reflect that my old Lawyer friend Mary Schultz was present during his interview with Fossum. 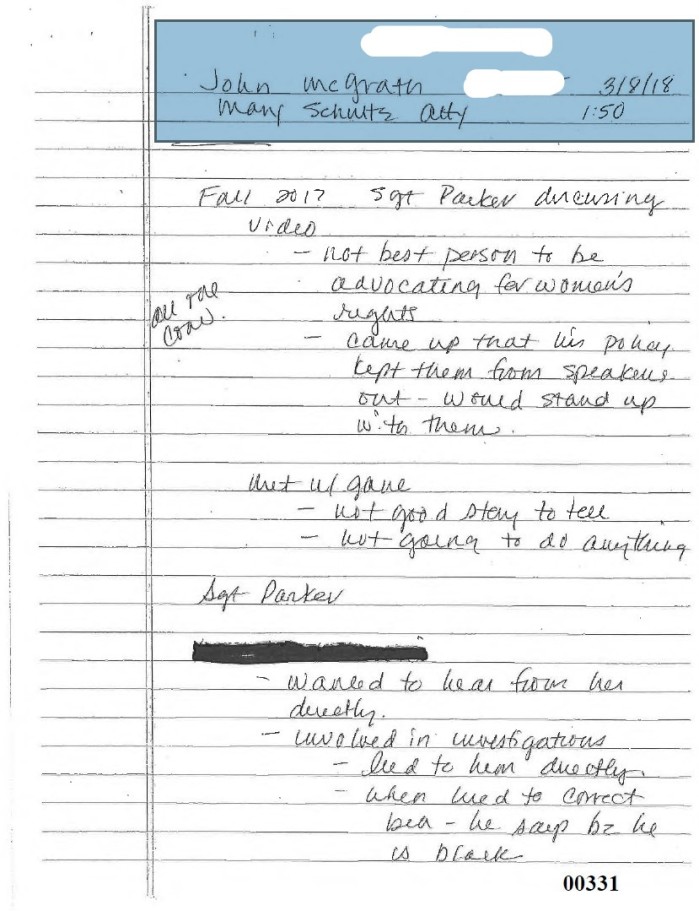 This revelation was something I had to confirm and was able to. Hiring Schultz, a good lawyer was a very good move on McGrath’s part because you would really have to be a dummy not to recognize that Knezovich is after him, and even a fool would be able to see that Knezovich’s request for a BoCC investigation was directed at McGrath.

Since McGrath has hired Schultz it presents a big dilemma not only for Ozzie, but also for the BoCC as I’m sure both can see where this will go if the BoCC decides to get rid of McGrath, and the Fossum Investigation provides one heck of a lot of evidence which could be used in a unlawful termination lawsuit. There has to be at a minimum one hundred deposition questions which could be formulated from the Fossum report, and to be perfectly honest I wouldn’t mind seeing Schultz depose Ozzie or for that matter see Gail Bass’s lawyer depose Ozzie. Should the BoCC decide to fire McGrath, I can’t help but think that Mary Schultz would look into whether or not Knezovich has contacted any of the members of the BoCC in an effort to get McGrath fired and also depose those BoCC members he had contact with has as well as their records.

In June of 2014 McGrath placed Phil Tyler on paid administrative leave while he was being investigated by the WSP. Some might remember from my previous stories, that it was this administrative leave that Phil Tyler complained about the County taking his cell phone away from him, so he couldn’t contact his son. Apparently Tyler didn’t have his own cell phone. Tyler never returned to work and instead filed a lawsuit against Spokane County which was settled out of Court for $100K. In my opinion Ozzie helped his friend out in that lawsuit by basically alleging that the Jail Staff complaining about Tyler were motivated by a race bias. 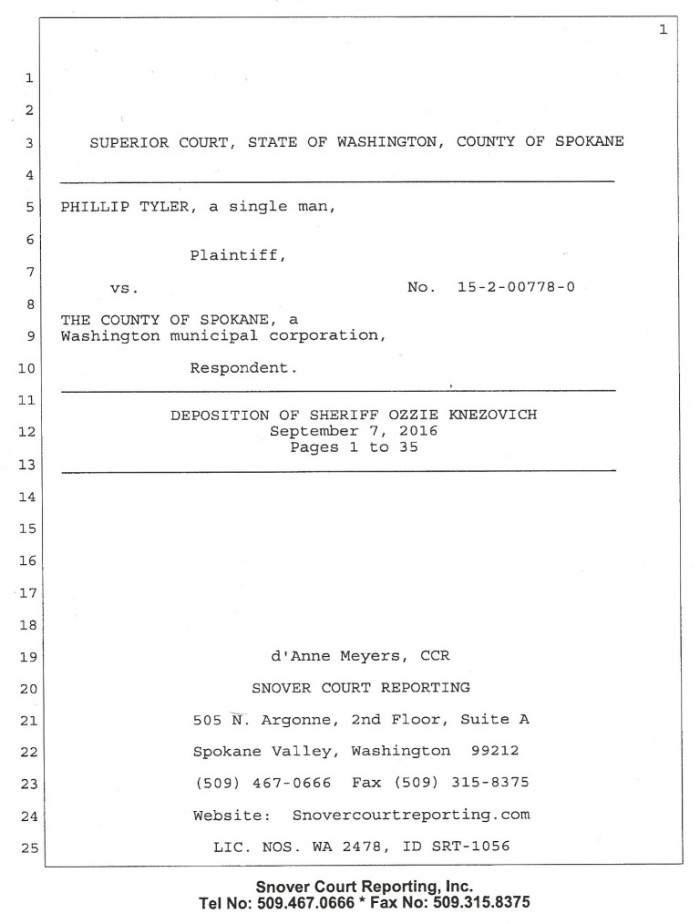 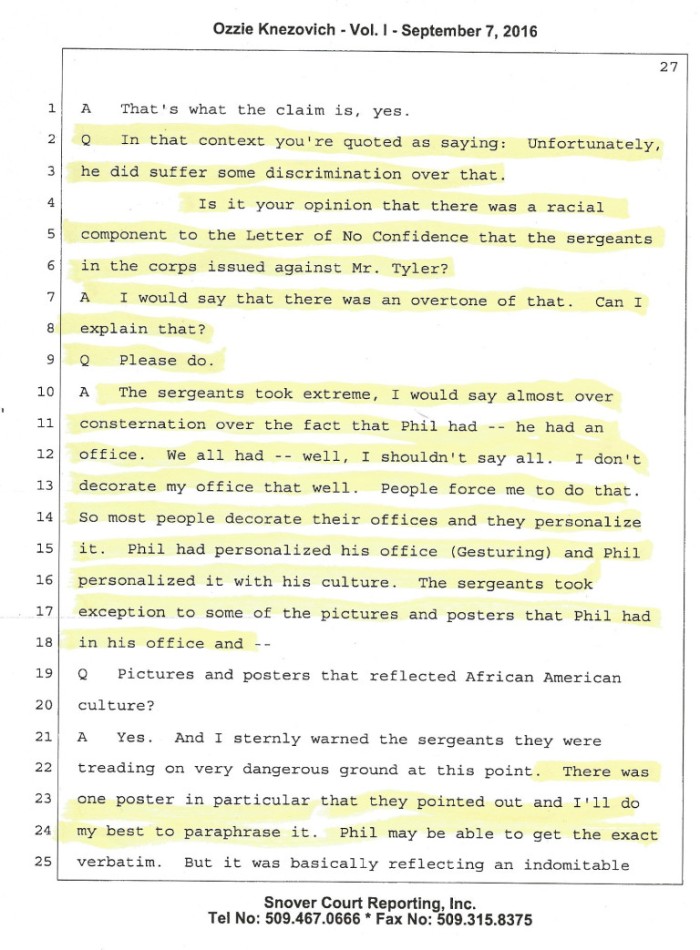 One of the key statements for me in Ozzie’s deposition was “Phil may be able to get the exact verbatim.”

Anyone who might have read Tyler’s statement to the WSP probably could have predicted that Tyler would sue the County. 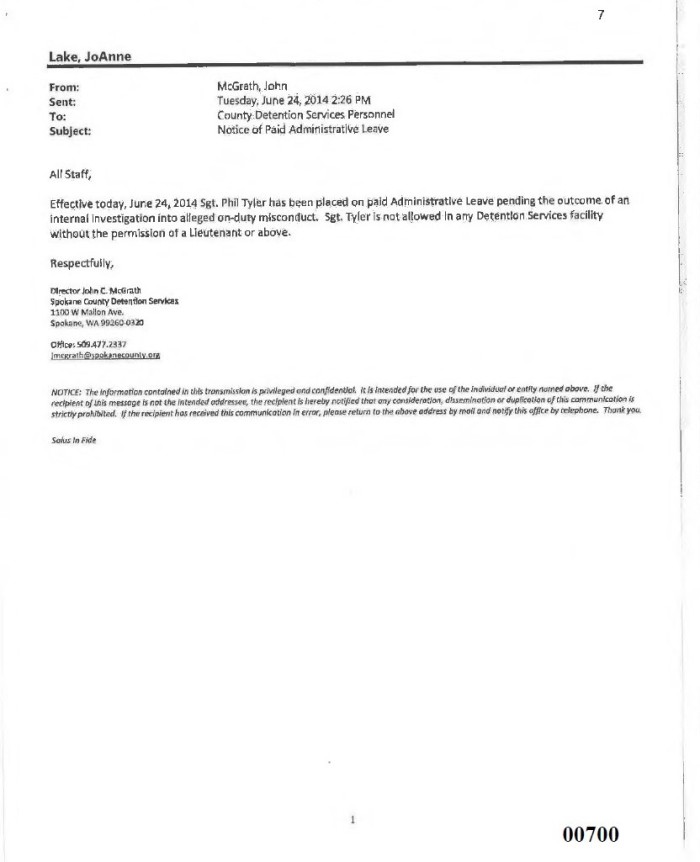 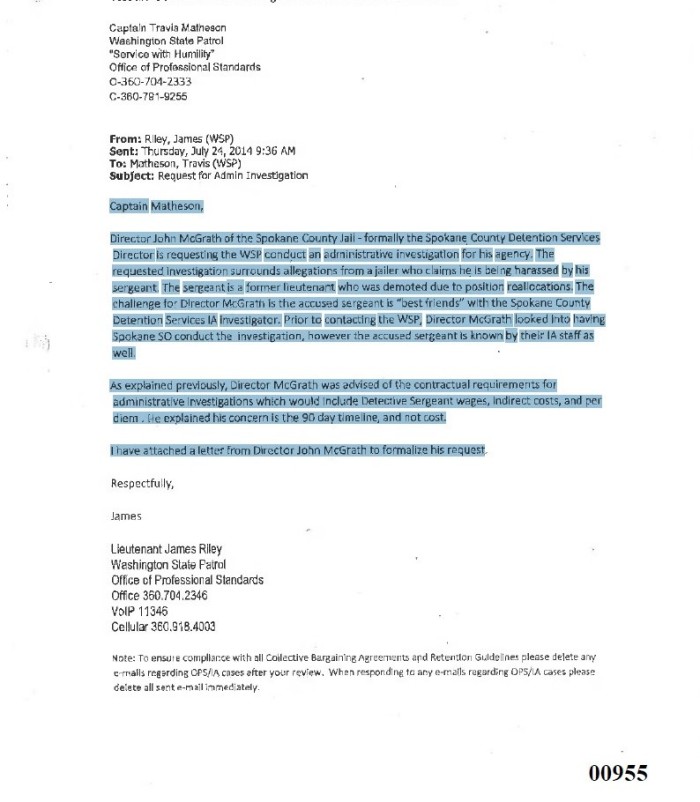 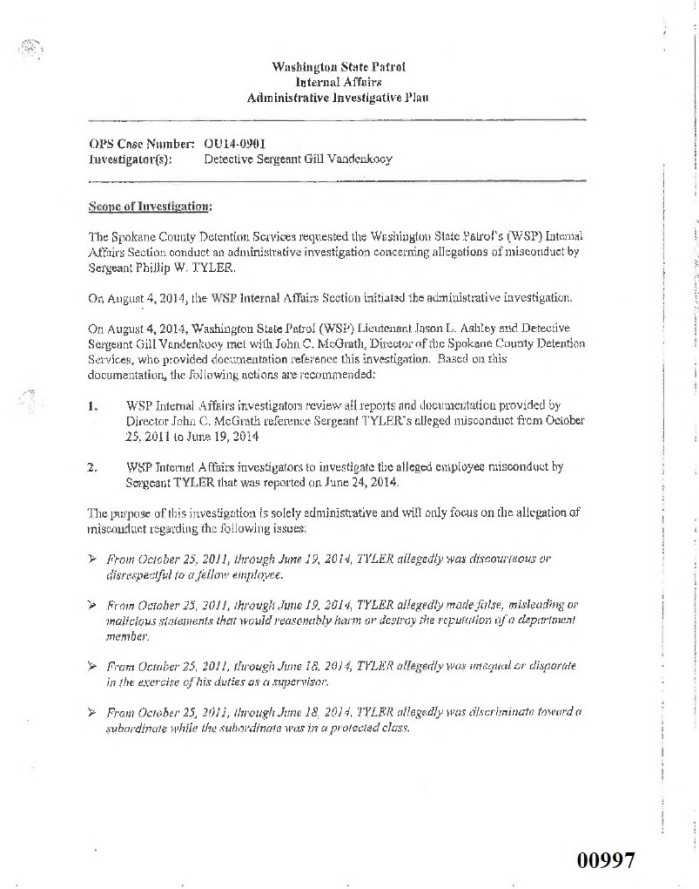 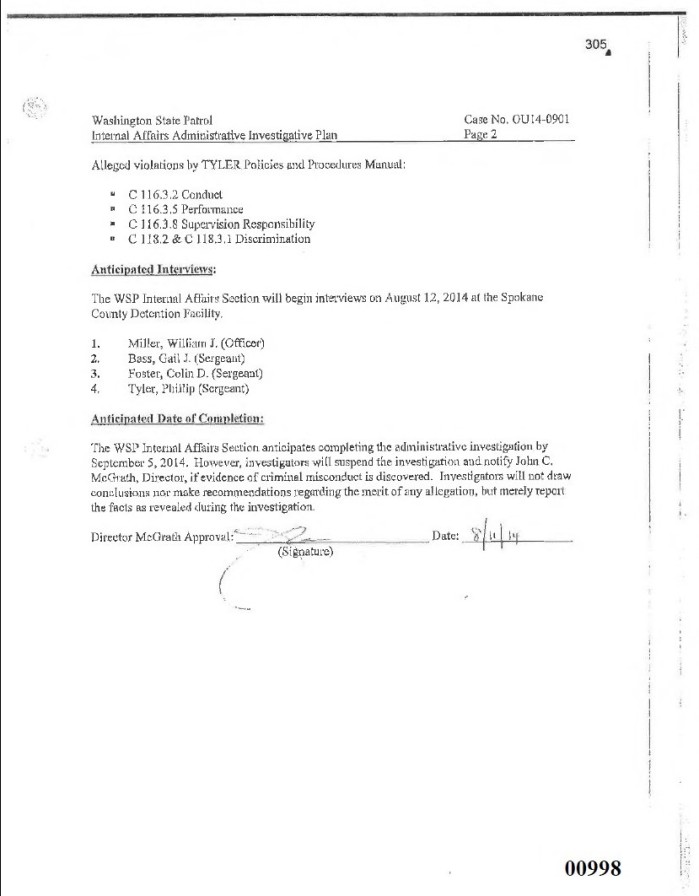 Fortunately for me WSP recorded their interviews making it a lot easier for me to go through and get the facts. 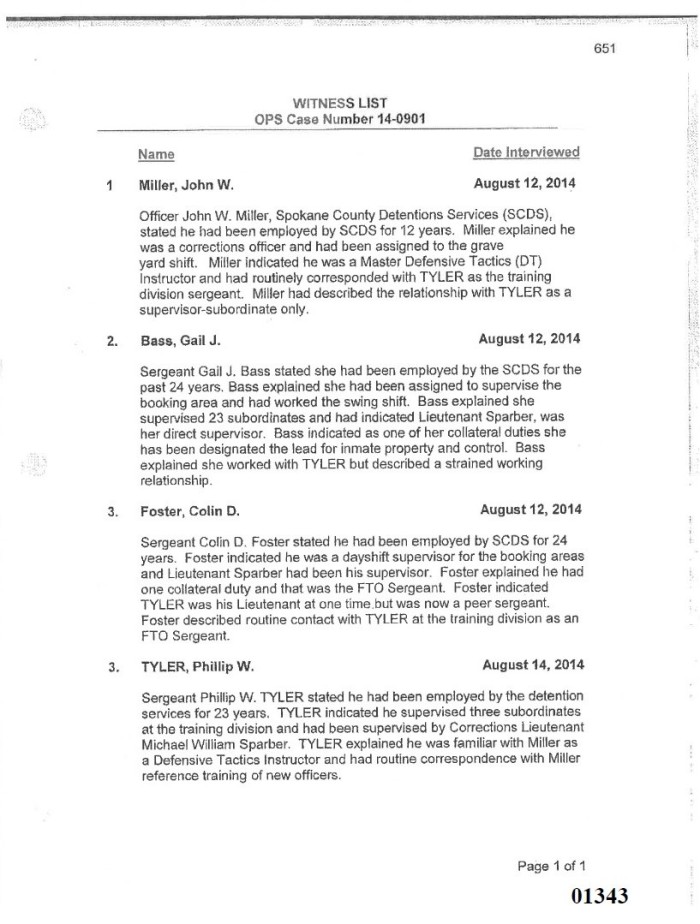 Some of the things I found of great interest in the WSP Investigation is that the investigation was into Tyler’s conduct between October 25, 2011 to June 19, 2014  which is during the time Knezovich was in charge of the jail and had exonerated his friend Phil Tyler in a number of IA complaints which were investigated by Ozzie’s SCSO IA Investigator Richard Gere. 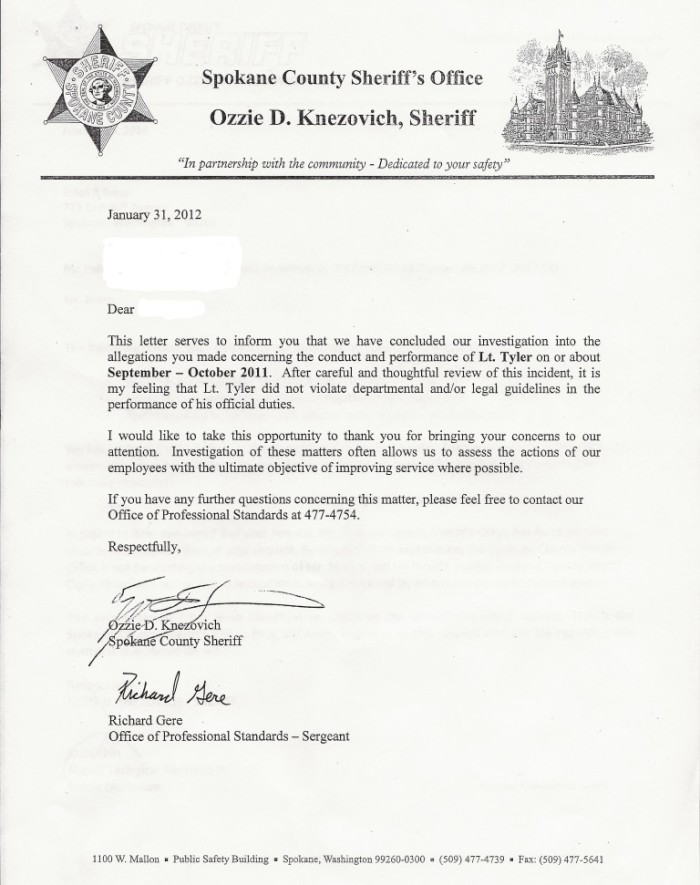 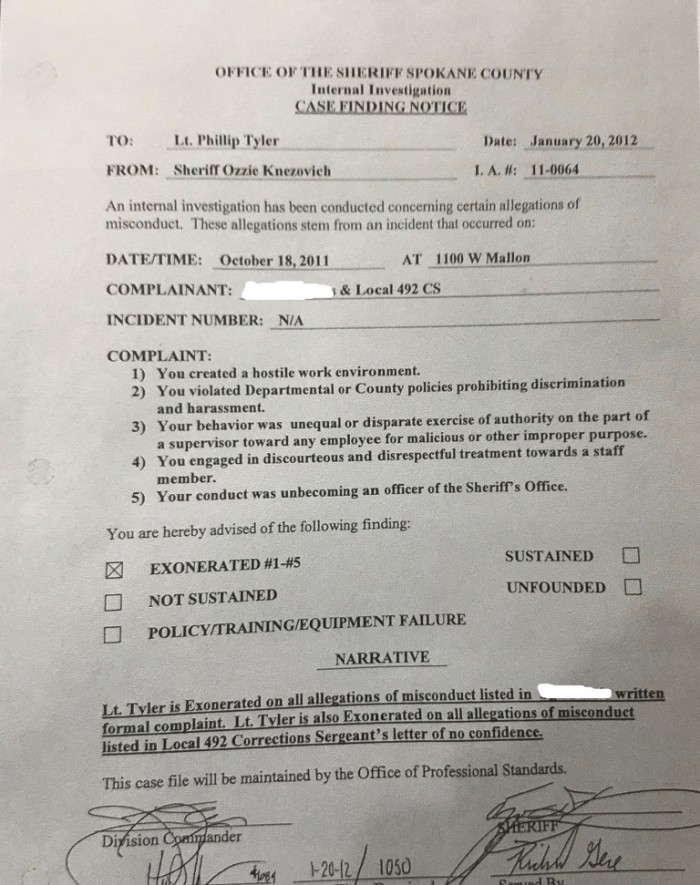 The “investigation” or lack there of by Gere of the Gail Bass complaint and Union No Confidence letter has become an issue in the $1.2 Million Dollar Claim Gail Bass has filed against the County. 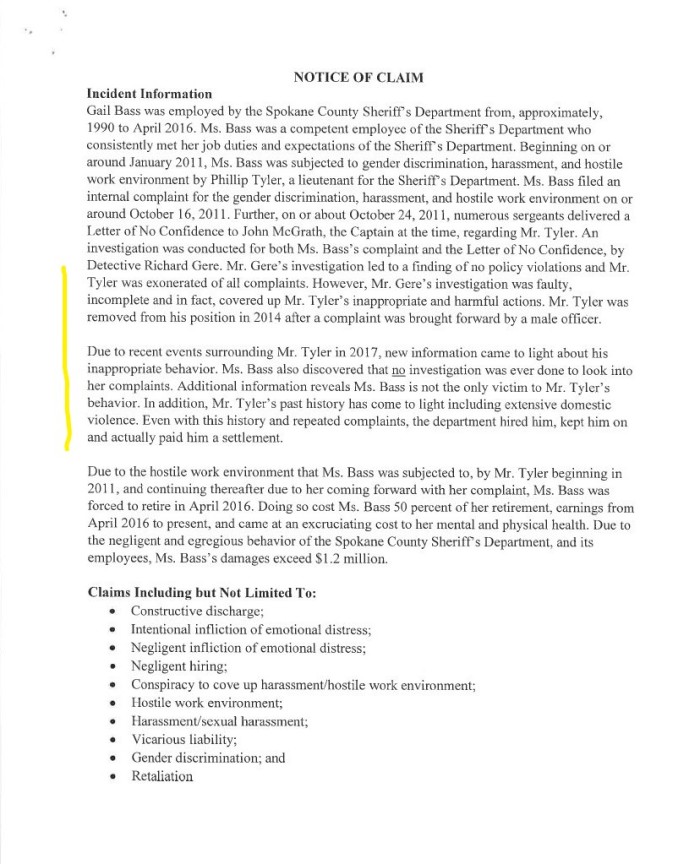 What is interesting about that aspect of the Bass claim is that it appears that the individual “OK” wanted to receive the Defensive Tactics Instructor position wasn’t a Detention Officer rather the Detective with the SCSO who investigated complaints against Tyler, something I’m sure Gail Bass’s lawyers won’t overlook. 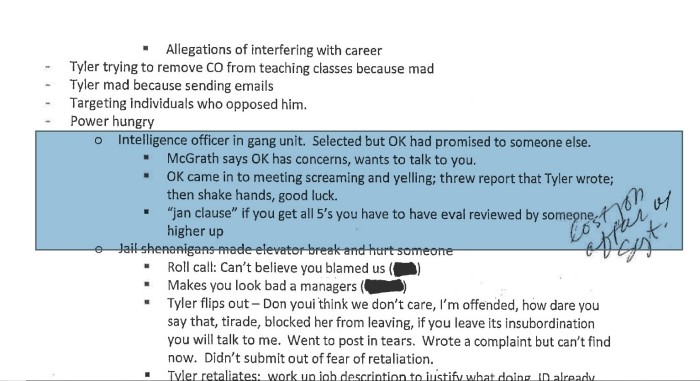 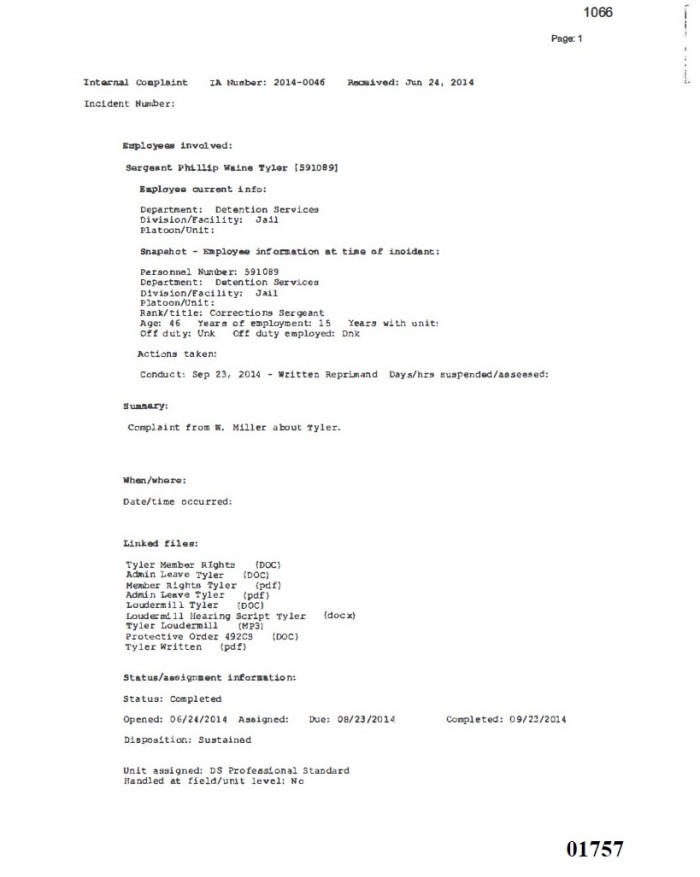 Going through all these documents reminds me of this story I recently did! 😊