Okay folks…of the hundreds of people that have read this story some have asked that I provide more context…so here you go…this sucker is long and there is a lot of Lawyer Speak…so have at it if you want!!!

My update story yesterday (CHAOS UPDATE II) was somewhat of a teaser so I could get a feel for how interested people were regarding Women’s Issues at the local level. Well there was a lot of interest and many people took the time to read the Court Documents I provided, so I thought I would add some more along with a few things I found interesting. It is important that I point out that the links I provide are attachments to a motion made by Bolton’s lawyer Mary Schultz, who by the way is one tough cookie.

When the Bolton lawsuit originally became, public there were many comments in the Spokesman Review that cast Jill Bolton in the light of a money grabbing, self-serving women whose only interest was causing trouble. Some of those folks MAY draw a different conclusion when they read some of this stuff which was stated under oath in deposition, and remember it’s on me!

One can’t help but wonder whether Mr. Ormsby’s Office was in fact a “good old boys club” with the usual two or three weekly meetings at a favorite watering hole.

One of the key figures in this case is Assistant US Attorney Aine Ahmed who somewhat amazingly after the Bolton lawsuit stepped down from a management position in the local US Attorney’s. Also, interestingly Pamela DeRusha, who is a close friend of former City Attorney Nancy Isserlis, was after the lawsuit promoted to Ormsby’s First Assistant. I could be wrong but I don’t remember a gal ever before being a First Assistant.

For those of you who don’t remember Aine Ahmed, a Muslim Gentleman was one of the individuals who came out and public chastised our County Prosecutor Larry Haskell and his wife Leslie regarding comments she had made several times publicly about Muslims. 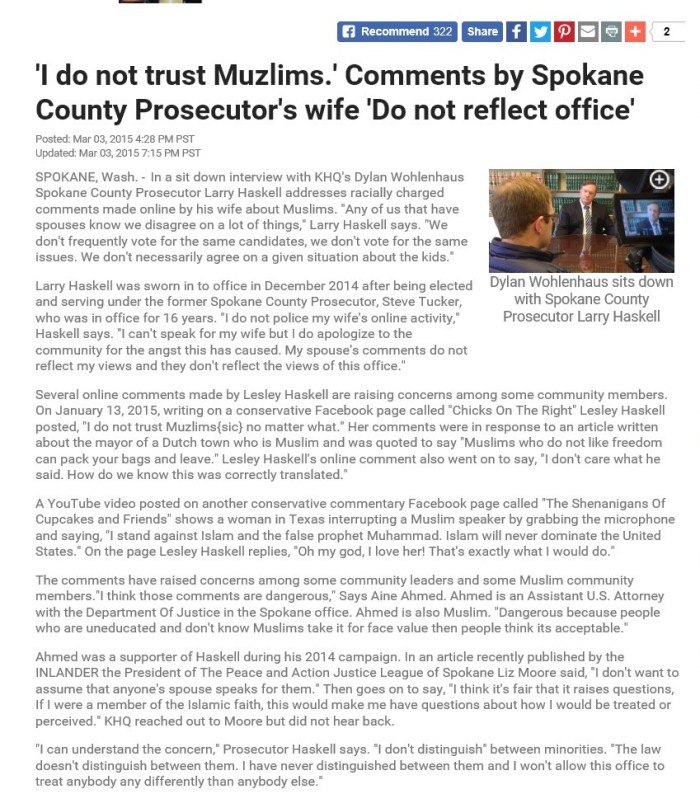 I thought what I would do is throw in a few highlights from some of the folks who were Deposed during the lawsuit.

This is from the Deposition of Stephine Van Marter a current AUSA, who as I understand it filed a EEOC complaint like Bolton’s and is part of a discussion regarding an email interaction between her and Ahmed. 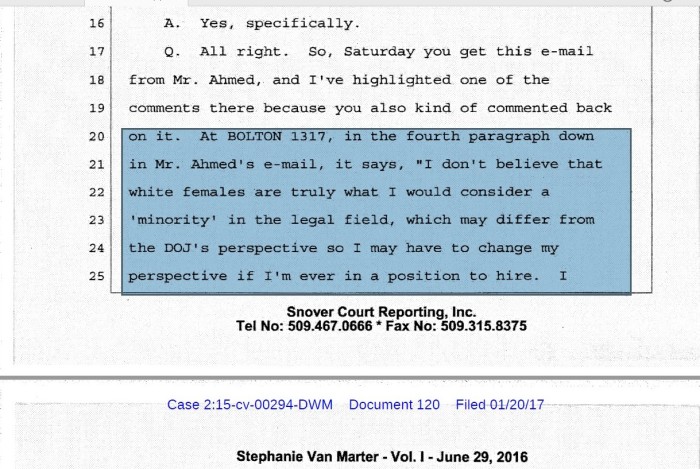 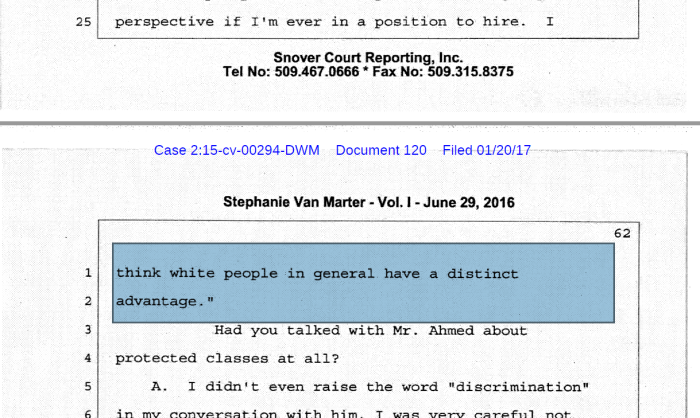 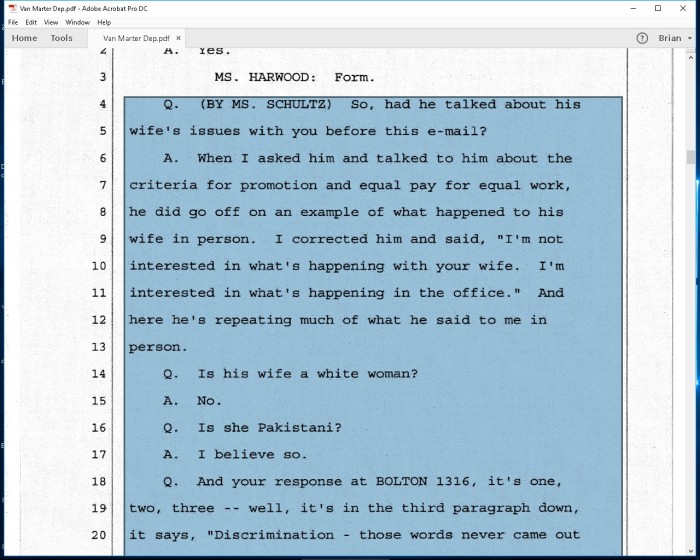 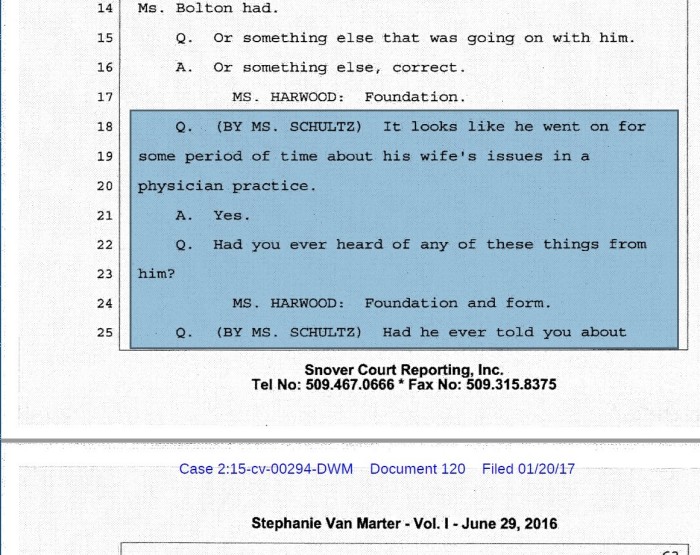 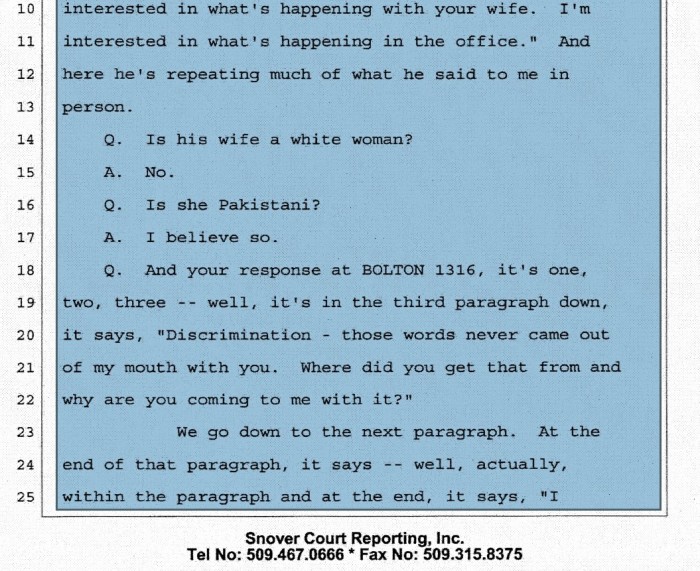 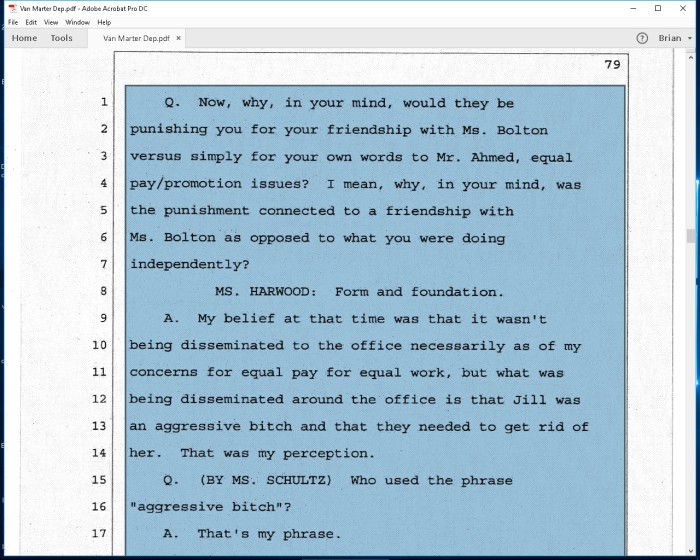 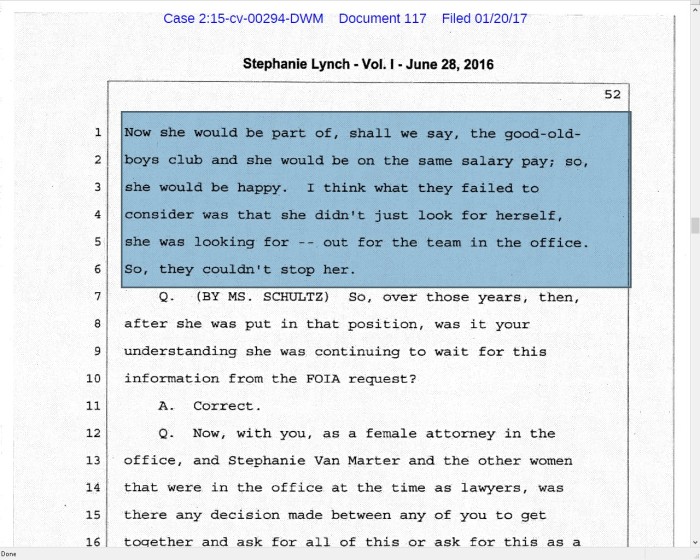 I find some of the statements in Mr. Ahmed’s Deposition when responding to questions regarding the email a bit odd but you can decide for yourself. 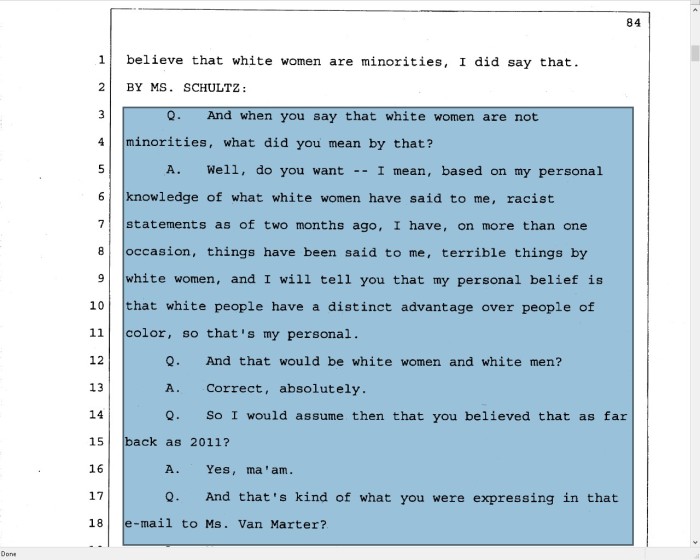 The Deposition of Joe Harrington was of real interest to me for several reasons, but I don’t know what you might think.

The questions to Mr. Harrington were regarding the behavior of Aine Ahmed and some emails he sent out. Just so you know “hippy Rogers” is referring to former Spokane County Public Defender, and now Federal Magistrate Judge John T. Rodgers, affectionately known as “JR” in some circles. JR, BTW happens to be the brother-in-law of Cathy McMorris-Rogers. 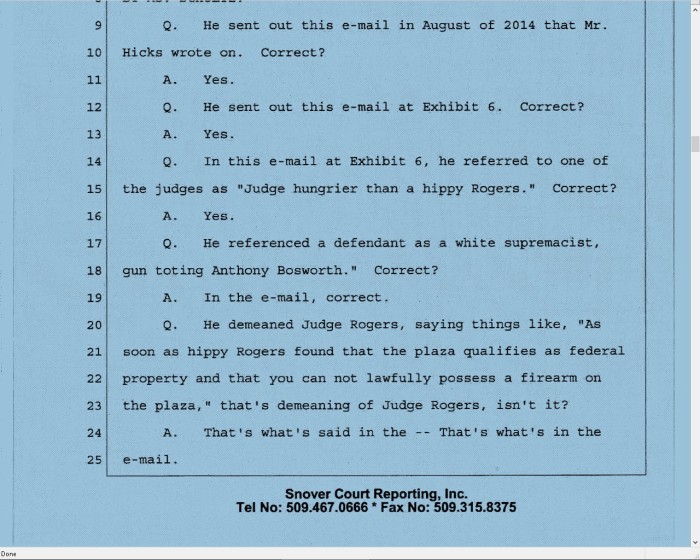 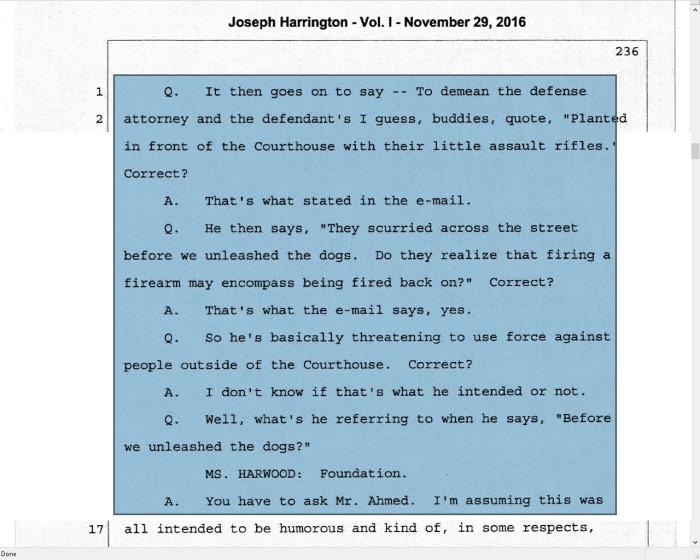 For those that don’t recall Anthony Bosworth is the guy that was arrested protesting with his firearm at the Federal Court House which was interesting because when the stuff hit the fan with the Federal Agents he called Sheriff Ozzie Knezovich to come down and help him out. Ozzie of course did, to the consternation of the Federal Agents. Ozzie was going to be a Defense witness for Bosworth but wasn’t called. You can read from the article who the Federal Magistrate Judge was nonother than “hippy” JR

“About a dozen supporters joined the Bosworths in Rodgers’ courtroom. Mike Ormsby, the U.S. attorney for Eastern Washington, was also present as the verdict was read.

Spokane County Sheriff Ozzie Knezovich had been requested to testify as a defense witness, but Stevens elected not to call him to the stand.”

Well…here you go if you want more detail:

5 thoughts on ““AGGRESSIVE BITCH” OR STRONG WOMAN WILLING TO STAND UP???”