It will be interesting to see whether the Spokesman Review will appeal Judge Plese’s ruling. As for me I don’t have a problem with redacting the names of the victims, however I don’t feel withholding the names of witnesses is appropriate, unless there is clearly a reason.

The Bainbridge Island and Sargent cases are often cited in exemption logs in response to Public Records Requests and are both Cop cases. The Bainbridge Island Case basically boils down to the NAMES, and IDENTIFIERS of Cops in unfounded or exonerated Internal Affairs cases can not be released to the public, however the entire case must be released with the Cops name redacted. The Sargent case put the Kibosh to the preciously often used “effective law enforcement exemption” of withholding documents from the Public, in other words once a case goes to the Prosecutor it is Public information unless law enforcement can clearly demonstrate the need to withhold it. I am not familiar with any cases since Sargent that have been brought by law enforcement claiming the need to withhold information cased upon the effective law enforcement exemption.

What is interesting about the SR Story is that there is NO mention that Pitcher himself was provided the opportunity to fight the release out in Court along with the victims. Although providing the opportunity for the target of the investigation to object in Superior Court is very, very rare it is a right the target has under the PRA, as do the victims and witnesses. When you see a government, agency contacting a terminated Public Employee and providing them the opportunity to object to Public Disclosure, flags immediately go up, and one can’t help but wonder if the IA Case will demonstrate ineptness on the part of the agency administration. SPD and SCSO Cops aren’t afforded that opportunity no matter how “the sensitive nature of the compiled records” might be. That could change however given the precedent the City of Spokane has set in the case of Ozzie Knezovich’s friend and former member of Ozzie’s Citizens Advisory Board.

Yes, it is true I submitted my Public Records Request regarding Robert West back October 25th, 2017 and 6 months later I still haven’t received responsive records, when there is delay after delay you gotta know there is something the City doesn’t want to Public to know.

To be clear, the delay is NOT the fault of the City Clerk’s staff, it is the fault of the Mayor and City Legal, who we will eventually find have reason to not want the records public (Yes, I know!).

As is often the case once I break a story the SR jumps on by submitting their own PRRs, so it will be interesting if they will take the same position they did with Pitcher. 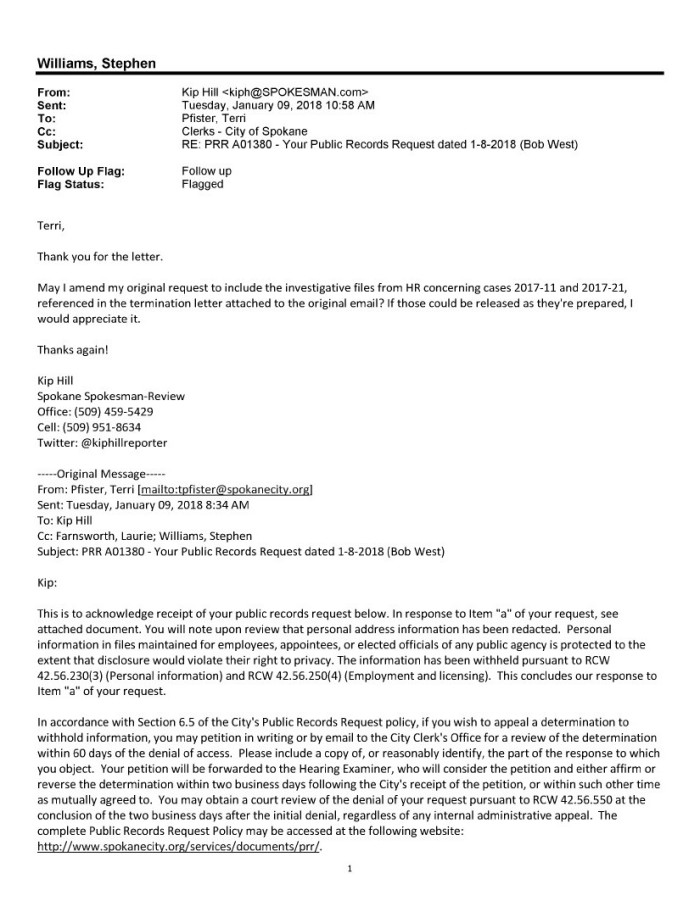 Another interesting PRR submitted regarding West was this one!

The question is how much info Ms. Muramatsu the SPD Lawyer gave Ozzie outside of the PRR process??

Another question still to be answered publicly is exactly what were those “outside forces”? 😊

I’ve been watching some of the Stars in this typical Spokane Docudrama as well, but not from the bed of a truck, including both the Heroines, Heroes, and of course the dreaded Villains.

There is a great cast of Characters in this Docudrama, Ozzie Knezovich, Phil Tyler, John McGrath, Josh Kerns, Al French, Mary Kuney, Michelle Fossum, NOW, and a few other Politicians.

Picking out the Heroines is of course easy, they are the women from the Spokane County Detention System who finally brought things to light, despite public and private threats from the Wizard. 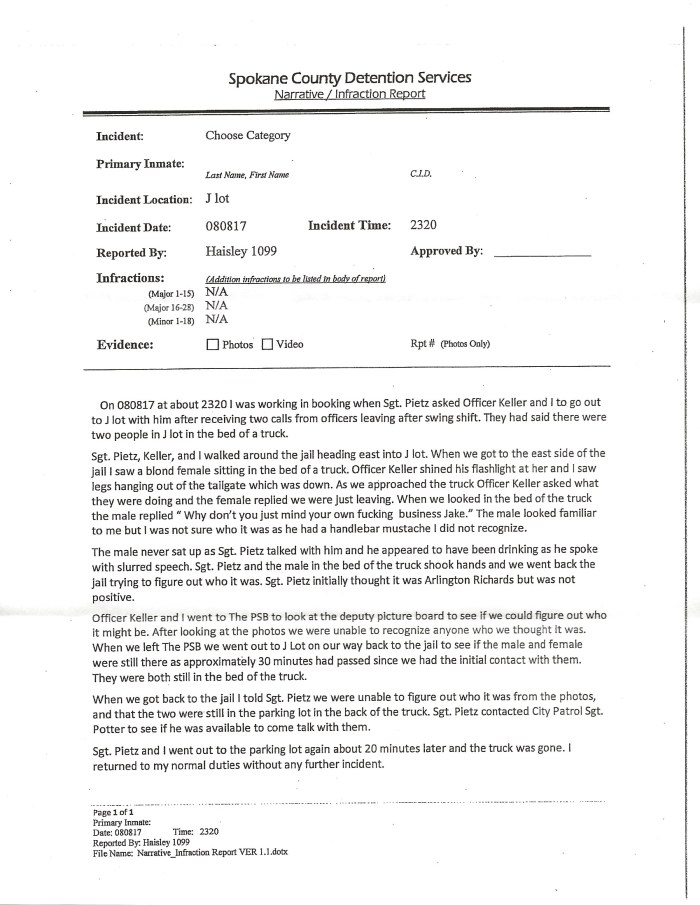 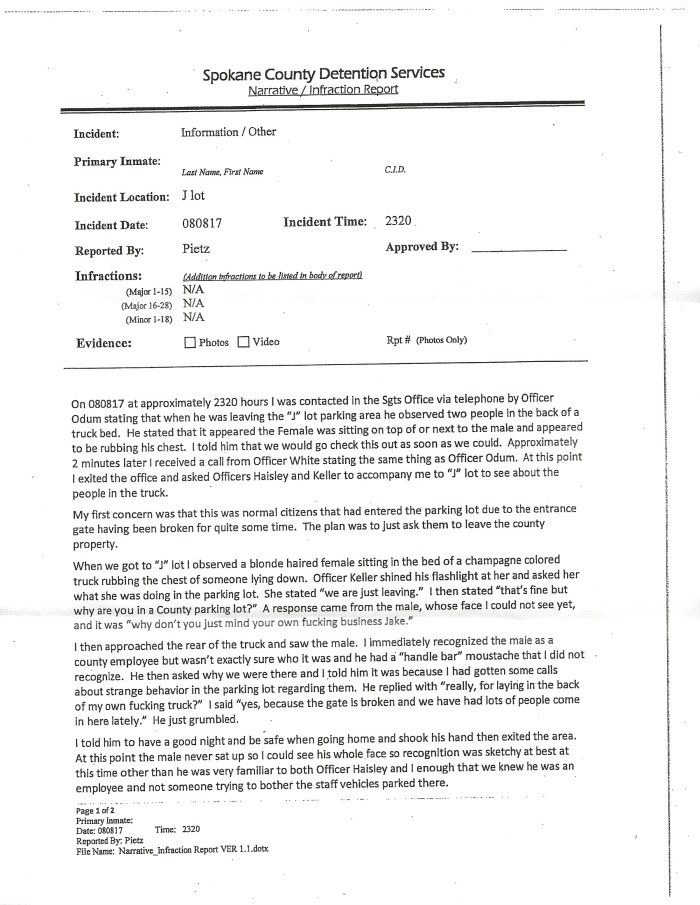 So exactly what role does Arlington Richards play in the Docudrama… more on that later…stay tuned!

Since Spokane County has been real slow and for obvious reasons, to respond to my Public Records Requests it may be a while before we learn the scope of work the County Contract outlines, but at some point, we will, even if it means another PRA violation litigation. 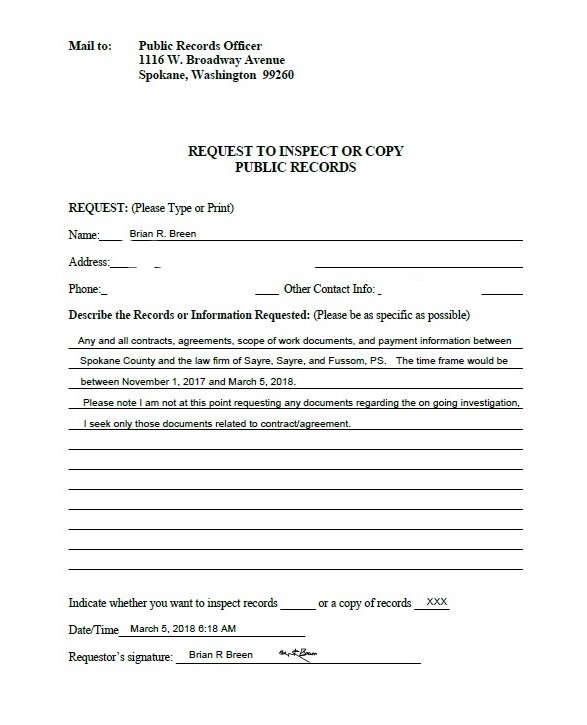 Given Lawyer Michelle Fossum’s background in these matters it would appear that she understands the necessity to follow all leads in order to establish a pattern and culture of behavior, in other words everything in the “Closet” and especially at the top.

With a little more confidence that they will be protected since some MSM have finally covered the story witnesses are beginning to disclose things that were hidden in the past, much like the Phillip Tyler situation there are many things that have been hidden from the public, including but not limited to problem after problem with dispensing medications to prisoners and complaints from jail nurses about those issues many under the reign of Sheriff Ozzie Knezovich.

As in any investigation, when unlike Ozzie’s investigation of his friend Phillip Tyler, actual interviews are conducted more truth comes out, and more leads need followed in order to truly understand the Culture, such is the case with the “Fossum Investigation”, and recently found report regarding Arlington Richards.

At this point in the “Fossum Investigation” Sheriff Knezovich is doing everything he can to distance himself from the man he chose to run the jail when Ozzie was in charge. The same man, John McGrath, who he recommended to the County Commissioners when they took the jail away from him. McGrath of course has joined the ranks of the many, many, liars in Ozzie’s life, and I’m sure the Sheriff hopes that people will forget that John McGrath, was his guy. The victims of course haven’t forgotten, they remember everything about Ozzie’s handling of the jail, and more recently his treats of slander and libel suits.

Quite the interesting story, especially when you consider warning, after warning, after warning the Mayor, City Council, and Public were given about the hiring of Frank Straub, and subsequently the hire Jim McDevitt’s friend Selby Smith. It wasn’t until the very predictable Cotton/Straub Affair was finally made public because of sources and Public Records Requests that Condon fired Straub, an issue that will be dealt with on April 18th during an Ethics Commission Hearing on an ethics complaint against Condon. Needless to say, shortly after much of the Gately, and Ennis case became public Smith quickly left the Spokane Police Department, I would throw in a “I told you so!” here but I’m getting tired of that line.

This Shawn Vestal story will give you some idea of where the downhill slide began.

“Let’s give the guy a chance.”

The other guy, has had more than enough chances Shawn, and times up!

“I’d rather go out on strikes at this point and try to hit the home run versus sitting and trying to get, in the bottom of the ninth, a walk,” Stuckart said. “We need somebody to lead this police department and this is the guy to do it.”

The only reasons he did not fire Gately, Meidl writes, were because of the sergeant’s minimal policy violations throughout a long career and because “SPD administration bears some culpability.”

As the saying goes…” No shit Sherlock!”

There are three things I feel are important to understand as far as the Gately case is concerned:

First, the ARP made it very clear in their IA Review that they are held to the burden of proof standard “Clear and Convincing” evidence, which is a higher standard than most agencies in the Nation…they even underlined it to make a point.

Secondly, I think it is very import to read Joe Walker’s addendum to the ARP finding at the end of the Gately IA case linked below.

***Just how priceless this comment by Knezovich actually is will come to light later! 😊

“If Gately really wanted to honor his oath, he would have gone on the stand and told the truth,” Spokane County Sheriff Ozzie Knezovich says. “It’s his constitutional right to do so, but not taking the stand diminishes, in the eyes of the public, every badge out there because you didn’t stand up and tell the truth. You took the Fifth.”