There is more than a bit of dysfunction going on at the Spokane Police Department and the battle between SPD’s Detectives and PACT is but one.

This is another one of those cases which was hidden from the Public and on the SPD IA Website, yet I learned of it through reliable sources, just as I did the Officer Chris McMurtrey debacle.

It looks like this time SPD isn’t going to conduct a full-scale expensive investigation into who my sources are, despite the fact that OPO Bart Logue made a request that SPD do so.

The response Logue received from SPD Director of Strategic Initiatives Jacqui MacConnell who oversees SPD IA is the same response Officer Chris McMurtrey should have received when he requested a leak investigation after I exposed his conduct and SPD’s efforts to hide it. Interestingly during the McMurtrey leak investigation now Lieutenant David Staben falsely accused OPO Logue of being one of my sources, and Staben happens to be one of the Officers involved in the Tofsrud case and is a target of a Human Resources Complaint made by Tofsrud which is not yet complete. Whether or not the fact that McMurtrey was an Officer and Logue is the OPO played into the decision not to investigate this one is anybody’s guess.

Perhaps it is my inquisitive personality, or maybe my long history of having to weed out BS from facts  that scares Law Enforcement Administrators, but for some reason I do and when they refuse to be transparent for some reason it makes me even more suspicious. I don’t understand the lack of transparency in this case especially since I recently helped Chief Meidl with an unfortunate mistake one of his PIOs made, and it is always better to fess up and face up. But that is neither here nor there, I’m used to it. 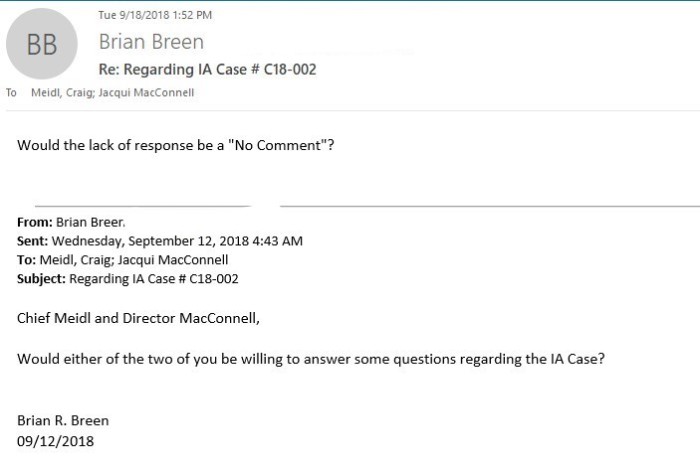 Having said all that this is a developing story and I have reached an agreement with City Clerk Terri Pfister over some records I have requested regarding this case which I expect in the next 10-15 days.

NOW TO THE CASE:

The dysfunction as well as the battle is clearly outlined in this IA Case which resulted in Sustained allegations of misconduct against Detective Lonnie Tofsrud and Sgt. Terry Preuninger.

I likely look at this IA Case a bit differently than most folks would since I was tasked with having to clean up messes involving informant handling when I was on SPD and was tasked with writing policy and procedure to prevent mishandling, but the link below will take you to the IA Case and you can draw your own conclusions.

What I see is a number of questions especially since the folks that made the actual IA Complaint was the Spokane County Prosecutors Office.

To quote Yogi once again!

As this story develops for those waiting for Part Two of “WHO WILL WIN THE BATTLE” although I have been able to corroborate most of what I am trying to, including from several sources a behind the scenes move by Sheriff Knezovich to try and get rid of McGrath I still have a couple of more things to corroborate.