From two to four?

The only thing new is the addition of Meidl and Baker from the last go around. The game is still the same… in the end the City Council will have to confirm whomever Condon might choose to lead the Spokane Police Department, and they will, regardless of whether or not Condon picks Meidl who is not qualified based upon the original criterion which was completely ignored in round two. He is also far less qualified than the other three candidates but that won’t matter to Mayor Condon. Once Condon has made HIS selection, if it is Meidl, you will hear and read this from the City Council;

“We need to move on regardless of the past and put everything behind us.”

Which is one of the big problems we have in Spokane. The people we place in leadership roles never learn from the past.

It isn’t like it was any big secret what would happen one of my former bosses makes it very plain here:

Sources close to the selection process, while it was going on, told me that Meidl had the votes and would be a finalist, so it certainly was no surprise to me.

The big question is; “Do the Politicians and Bureaucrats who ultimately run the SPD really want a culture change, or is it all political lip service?”

Councilman Breean Beggs, who was a member of the selection committee, hopes Condon gives each candidate a fair chance, but he said “there is no mandate for the mayor to have an open mind.”

Well of course there isn’t a “mandate” Breean, everyone knows that Condon can pick whomever he wants including Meidl. The mandate will be before the City Council to decide what is best for SPD, and subsequently the Community.

“We need to move on regardless of the past and put everything behind us.”

“The question wasn’t whether Craig Meidl or any other individual was qualified, the question was, when you compare all the remaining people in the pool, who is the most qualified to provide the leadership we need now,” Beggs said.

Of course that is the question Breean, but as you point out, as far as the Mayor is concerned, “there is no mandate for the mayor to have an open mind.”

THE FRONT RUNNER ASIDE FROM MEIDL…IS?

That is quite evident from media and other sources.

Lehner has some baggage, but they all do to a certain extent:

None of the candidates however have the amount of baggage Frank Straub had when Condon picked him. The baggage, as far as Straub was concerned, would have taken a platoon of Red Caps to carry.

The new guy John Bruce doesn’t have much baggage but his experience is limited to smaller Police Departments in Texas (Frisco and Allen).

As many know there is quite a bit of communication between a group of us retired SPD folks that have a real concern about cleaning up our old joint (well over 100 years of combined experience), so I wanted to throw this in from one of my other old Bosses because it really describes exactly what we are dealing with here (*my emphasis).

He hit the nail on the head that is exactly what they are a “fungible commodity”!

It was really easy for us old retired cops to determine of the four candidates who has the most political savvy simply by going back and reviewing the various public statements they have made, including Meidl. Without question the most politically savvy candidate is Robert Lehner so let me translate the statements made by in the SR story for my readers.

Lehner, of the Elk Grove Police Department, said the added complexity of the situation has made him more interested in the job.

Here you simply exchange “added complexity” with FUMess. Of course he is more interested in the job because his political savvy, and read of the FUMess, as well as the Mayor’s other messes tells him that if he is chosen by Condon as new Chief of Police he will have the political and go to the media advantage to do pretty much what he wants with little interference from Condon. The other external candidates of course know the same thing, but may not have the savvy on how to play it. Meidl of course has a well-documented track record of doing exactly what he is told to do by the Mayor and the Mayor’s cronies, and he will continue in that vein if he is chosen.

Basically what Lehner is saying, along with the I want the job rhetoric, is that Spokane is a far more challenging place to be a Chief of Police than places like Chicago, Baltimore, LA, etcetera. But his comment does demonstrate his political and media savvy which boils down to saying and doing the right thing at the right time to accomplish the agenda. Obviously there is nothing wrong with that it is all part of the game, another part of the game is to always be accessible to the media when job hunting for a position like this.

If Meidl is selected, Lehner said he wouldn’t see that as a “stacked process.”

Of course he said that! When you are a “fungible commodity” you never put down or dis any of the various processes you have been through… how would that look for the next one if there is one?

As fungible commodities go this one is kind of funny… Good luck Chicago!!! 🙂 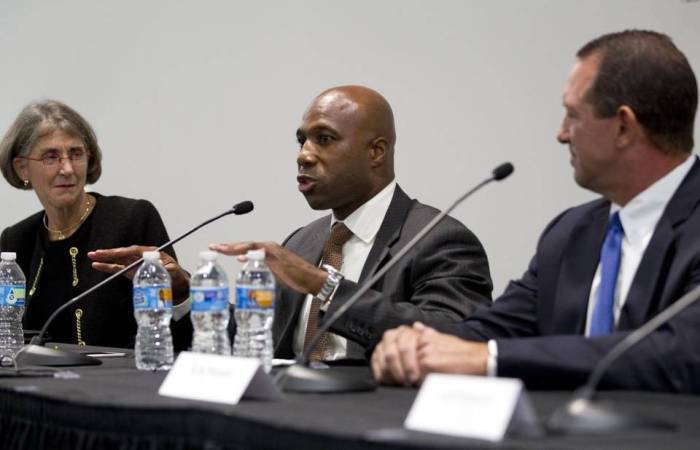 Do I go with the pliable Meidl and completely ruin what little credibility I had and who I can count on to cover my butt, or do I go with a “Fungible Commodity” who I may not be able to control?

One other thing to keep in mind, and something I pointed out to someone not long ago, when you consider a retirement income, plus 170-180 Grand a year the SPD Chief of Police job becomes pretty darn attractive, not only to the candidate, but also the spouse!

What was this press conference all about? The reporter should know!