WHAT DO YOU DO WHEN YOUR ASSET MANAGER LIES IN OFFICIAL CORRESPONDENCE (PART FIVE)?

When you review statements like these the crux of the issue usually surfaces early in the statement and in this case it quickly appears on page three of the transcription and is the FOURTH QESTION Major Lundgren asks Meidl that isn’t a background question.

You might think I’m taking things out of order here but I’m not, we will get to the rest, as I said the key to the issue generally shows up early in statements as it did in this case, and it is where you start to get to the truth.

If you had read this IA Case from the beginning, and have a little experience, you would have been able to anticipate the “This guy ain’t a team player, and it is pissing me off!” questions would show up quickly in the statements simply by reading Major Lundgren’s report, and they did. 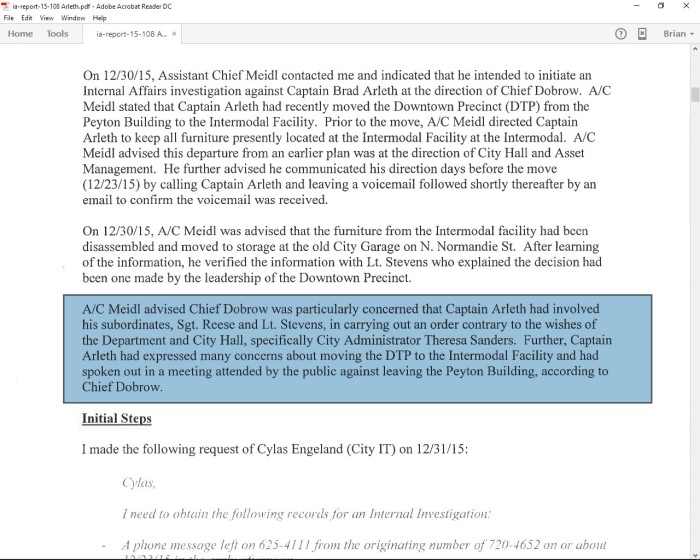 Even an inexperienced investigator knows, or at least should know, that when you are assigned a report or complaint the very first step is to establish as much as possible the motivation for the complaint as soon as possible, and try and access whether or not there are underlying issues that may have a bearing on the case you are investigating. This is true in any type of case, crimes against persons, property crimes, murders, rapes, and YES… IA Cases.

There was NO effort on Lundgren’s part documented in his IA Report that he made any effort to establish during his receipt of Meidl’s complaint on December 30th, 2015 exactly what the specifics of the complaint were, and what he and Dobrow wanted investigated.

Here are the basic questions which should have been asked of Meidl when he made the complaint against Arleth regarding what the issues really are:

1) You stated Chief Dobrow was “particularly” concerned that Arleth involved Reese and Stevens. Is that also your particular concern and is that a part of YOUR complaint?

2) When you accuse Arleth of “carrying out an order contrary to the WISHES of the Department and City Hall, SPECIFICALLY City Administrator Teresa Sanders.” what do you mean by “WISHES”, and did Teresa Sanders issue a direct order to Chief Dobrow or you?

3) You make it clear that Arleth has expressed many concerns about the move, and that he, according to what you were told by Dobrow, spoke out at a public meeting against the move. Are you making a complaint that Arleth violated the SCOTUS standards established for public employee’s free speech rights, including the most recent Lane v Franks case?

According to the Garrity warnings at some point Lundgren apparently narrowed the complaint to this:

I would have had several others of course but those would have been the very basic questions. One of the important things to understand about a compelled statement under Garrity is that there are limitations to the questions the investigator can ask during the course of the statement so you have to be prepared and make sure you don’t cross the line when taking the statement and establishing exactly what the complaint entails is of paramount importance. As you can see from the above image the Garrity warning does NOT include any reference to the “public employee free speech issue”.

As any IA Investigator would know the questions asked during a Garrity Statement MUST be questions that are specifically, directly, and narrowly related to his or her official duties. Because Major Lundgren didn’t prepare for the inevitable it was thrown in his face when he took Arleth’s Garrity statement, which we will cover in that part of this series. I will note here however as far as throwing it in Lundgren’s face is concerned, I wouldn’t have been so nice about it.

As I mentioned previously I have been having a hard time getting through this series of stories because I continually find myself breaking out in laughter. Here we have Interim Chief Meidl apparently complaining about a public employee’s free speech rights, when one of the BIG defense of his participation of the organized infamous “Salute” was that it was their “free speech right”.

I’m not going to go into the non-seneschal evidence Meidl provided in support of his complaint you can read it and decide for yourself.

At this point in the story I want to update you on the response I received today from Interim Chief Craig Meidl in response to this email I sent yesterday:

Today I received this response to my email from Interim Chief Craig Meidl (I understand some prodding may have taken place). It was nice to see the response directly from Meidl, even though it could mean I’m still off of Officer Fuller’s Christmas Card List:

When an Investigative Reporter gets an email like Interim Chief Meidl’s…you just have to ask those “pointed questions” …so I did…and I’m hoping to get some answers:

That is, it for today folks there are other things coming to light on “Furniture-gate”, you need to know so stay tuned!

3 thoughts on “WHAT DO YOU DO WHEN YOUR ASSET MANAGER LIES IN OFFICIAL CORRESPONDENCE (PART FIVE)?”