You file an Ethics Complaint or you could just forget it because that’s what City Employees do and it is apparently acceptable practice.

It is plain to see how “Furniture-Gate” got started and resulted in this totally inaccurate headline which states that Captain Brad Arleth was “suspended over used office furniture dispute”. The Headline is not in the least bit true but unfortunately will cause Arleth to be remembered as the Cop who was suspended over some furniture dispute. 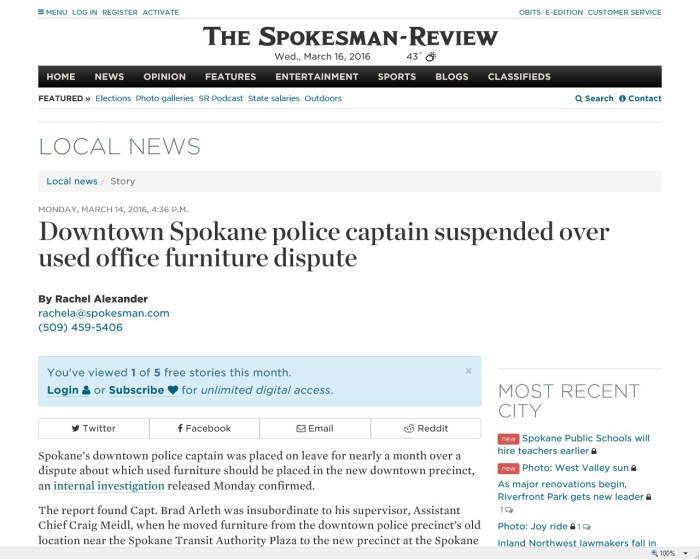 So when and where did the stupidly, egomania, turf protection, and backstabbing begin? Well here is the timeline for this typical Condon/Sanders disaster.

December 17th, 2015 at 11:47, now interim Chief of Police and “Administration Golden Boy” Craig Meidl emails the “game plan” for the move to the Intermodal to SOME OF the people involved (Meidl at the time was Dobrow’s Assistant Chief). Not included in the email distribution are such luminaries as Teresa Sanders, Ed Lukas, and Scott Simmons. INCLUDED in the distribution are JUDY KNIGHT, Interim Chief RICK DOBROW and Director SARAH LYNDS (I still haven’t figured out what the hell she does down there). 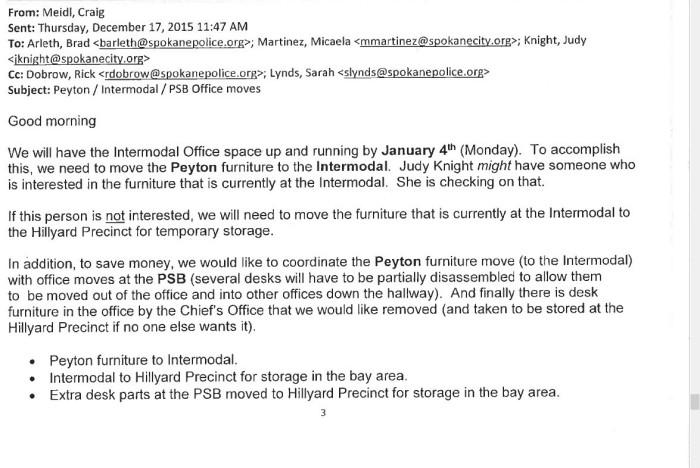 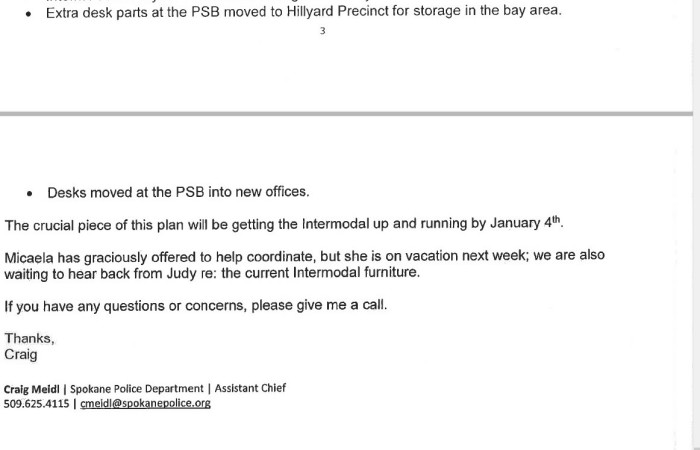 As you can easily see from the email the Big Wigs want the Intermodal “up and running by January 4th (Monday)”. There must have been some set-backs for the planned January 4th Dog and Pony Show because it didn’t happen until January 20th.

What else is important to note in Meidl’s email is what he typed in BOLD type. It is also important to note that JUDY KNIGHT even has someone lined up for what turns out to be the donated used furniture located at the Intermodal. Meidl includes in the distribution MICAELA MARTINEZ. Just so you know Ms. Martinez is SPD’s “Buyer”, whatever that entails, and recently came to the City from the Airport Board. I wonder if she knows Jim McDevitt?

As a matter of fact, everything is hunky dory at 12:33 PM and JUDY KNIGHT will be taking Sneva Snowboard expert KYLE TOWHIG to the Intermodal because he might want the furniture for his offices. Notice that Dobrow and Lynds are cc in JUDY KNIGHT’S email. The important thing to also note in the Meidl and Knight emails is WHO IS NOT IN THE DISTRIBUTION!

Forty-six minutes later, at 12:33 PM, JUDY KNIGHT responds to Meidl’s game plan email and everything is so hunky dory and she is sure that KYLE TOWHIG will take some of the furniture that was in the Intermodal. 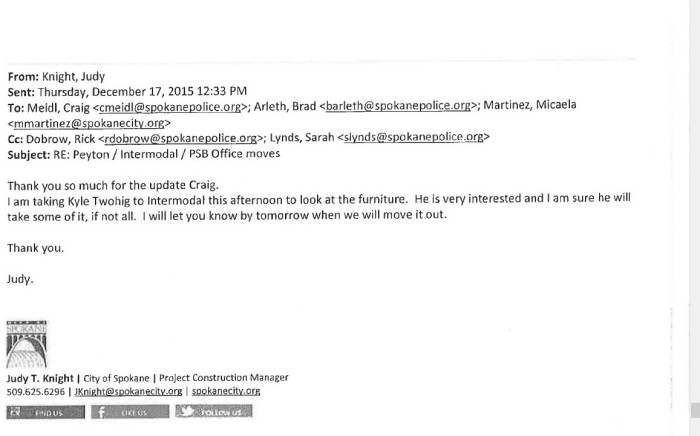 Fifteen-minutes later, at 12:49 PM, when ED LUKAS learns from his Girl Friday that the Cops are stepping on cronies feet and doing the right thing so he cries to Big Momma.

Important things to note in the above ED LUKAS email are:

(Translation: These cops are not following my “game plan” so tell them to follow MY orders!)

BTW: I suppose I should fill you in on who ED LUKAS actually is. He is just another one of those good ole exempt hires of Mayor Condon who after a short tenure with Umpqua Bank (A big Condon Contributor) for some unknown reason left Umpqua in January of 2015 and ended up with one of our gravey exempt jobs. 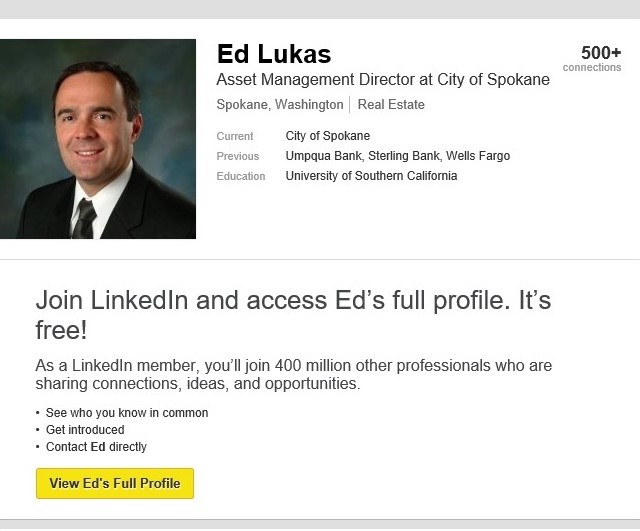 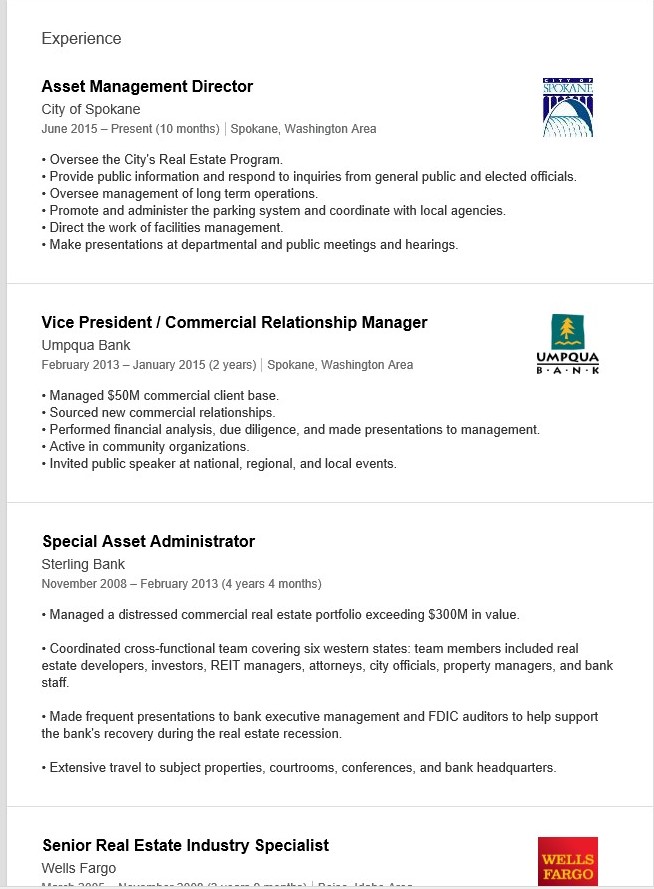 Eight-minutes later, at 12:57 PM, JUDY KNIGHT knows from the LUKAS email that the stuff has hit the fan, and the Big Momma TERESA SANDERS is going to make the call. Apparently for some reason during that eight-minute time frame she contacts Senior Engineer JOEL GRAFF who works under Towhig. Why she would contact him is anyone’s guess.

Thirtytwo-minutes later, at 1:29PM, Big Momma sends out the “You cops don’t mess with our cronies and big plans email.” She copies SCOTT SIMMONS, another crony. 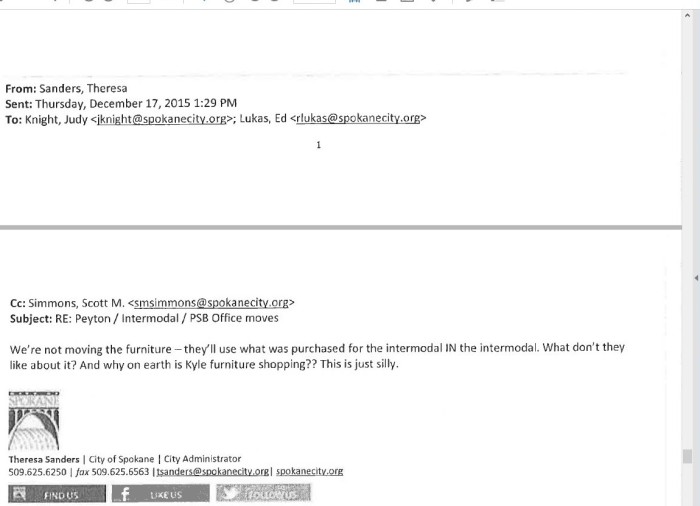 The key here is what transpired during the 32 minutes between 12:49 PM and 1:29 PM, it would appear SANDERS’S email is your typical documentation email and the probablility that cell phones were blazing is extremely high. I understand another Investigative Reporter is looking into just that.

Big Momma in her email however perpetuates the lie by stating “they’ll use what was purchased for the intermodal IN the intermodal.

She also belatedly asks “What don’t they like about it?”. A little late to be asking that question I would say!

Teresa…honestly the City would be far better off if Kyle Towhig DID spend his day “furniture shopping”.

Thirtythree-minutes later, at 2:02PM, JUDY KNIGHT informs TERESA SANDERS that she has delivered the ultimatum to the Cops not to mess with the cronies. She also explains why KYLE TOWHIG is doing what he is best suited for. 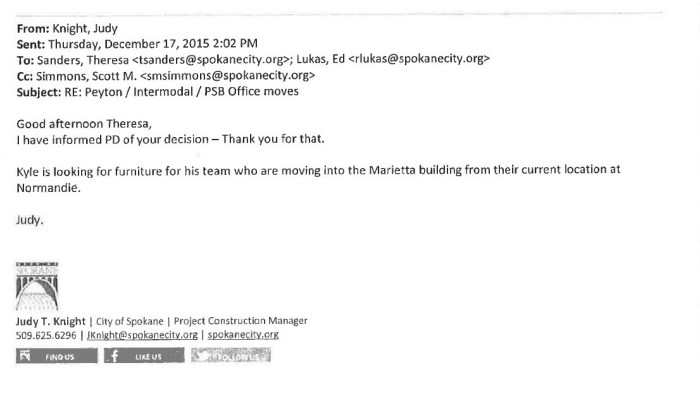 It is important to note in this email that JUDY KNIGHT does not document WHOM she informed of Big Momma’s final decision.

Eightminutes later, at 2:10PM December 17th, 2015 A day that will go down in infamy as the day the Furniture-Gate Case had it’s beginning comes to an end with this email from Big Momma.

As you can see from the email TERESA SANDERS recommends that KYLE TOWHIG do his furniture shopping at the Peyton Building.

Well…there you have it folks…how it all got started. As I mentioned before I’m having trouble getting through the Arleth IA case because I find myself laughing all the time…now perhaps you can see why.

Keep in mind this is just PART ONE in a series of story I will be doing on this rediculs waste of money. For those of you that are wondering why I have highlighted and underlined some of the names in this story, it is simply because NONE of them were interviewed during the IA Investigation and they ALL should have been.

8 thoughts on “WHAT DO YOU DO WHEN YOUR ASSET MANAGER LIES IN OFFICIAL CORRESPONDENCE (PART ONE)?”