The first thing I would like to point out in PART SEVEN is that it is my opinion that BOTH Honest Cops and Honest Citizens want the same thing from any IA Complaint, quite simply, an IA Investigation which is “timely”, “thorough”, and “objective”, something the Spokane Police Ombudsman is responsible for making sure happens. So when you read these stories keep in mind that…YES this involves a Cop Complaint against a Cop…but the truth is it could just as easily have been YOUR complaint against a Cop.

It should be obvious that my opinion, as far as this case is concerned, is that the investigation was not thorough or objective and was influenced directly from City Hall. As far as “timely” goes, it didn’t take long, but it sure as hell should have taken more time.

Let’s start by looking first at what some of the things the COPS/DOJ Report said about IA Investigations when it was released back in December of 2014.

Now let’s take a look at the COPS/DOJ Six Month Assessment released in December of 2015 (Yes, I know it was more than six months, but that is the way these things work.): 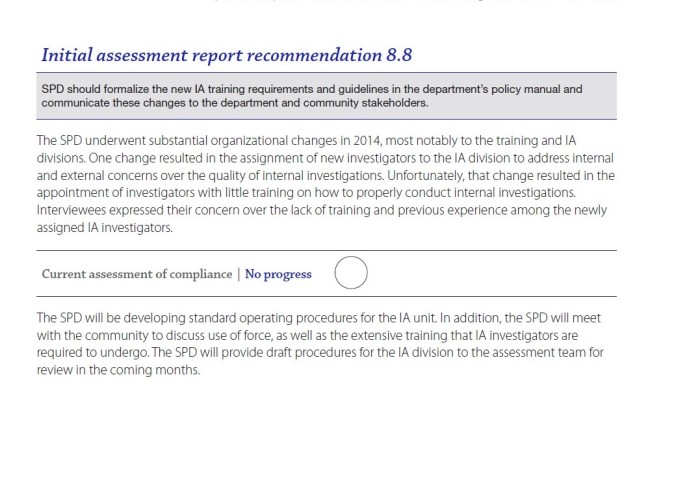 I would agree with the COPS/DOJ Consultants…it appears to be a big fat goose egg.

Here is the explanation Rachael Alexander received regarding the status of Recommendation 8.8:

Needless to say that after reviewing the Arleth IA Case, and others, I’m wondering just exactly what the hell this document Major Lundgren is putting together will look like.

Now we should go further back and look at just some of what the Use of Force Commission had to say:

Use of Force Commission Report

from witnesses through methods (e.g., email, voice mail, etc.) other than in-person 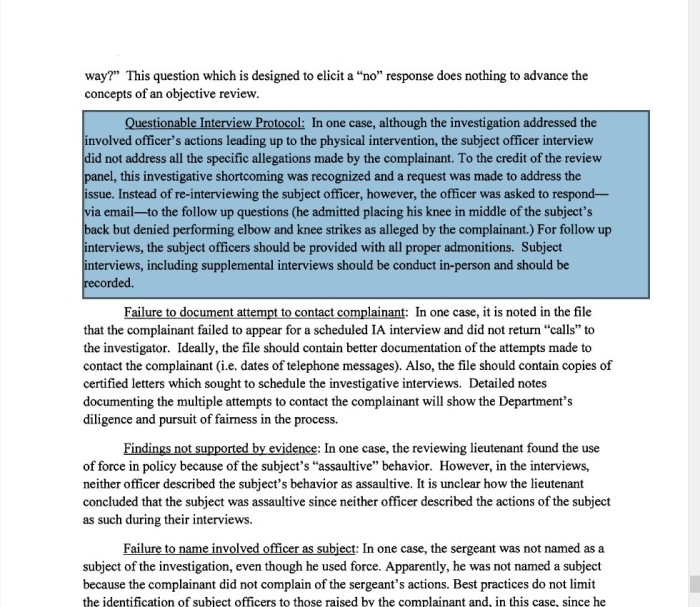 Of course the above is all pretty basic stuff…like…interview ALL the witnesses, collect ALL the evidence, take proper statements no emails etc…just the simple things.

I’m going to focus primarily on the Arleth statement because it had some very telling parts, however, a few comments first. Statement after statement I have read in SPD cases DO NOT follow procedures that many cops feel are a pain in the ass because they require more of their time, but the fact is if you take the proper steps you end up doing less work in the long run and you don’t look dumb on the witness stand, and not just IA cases.

1) Most SPD recorded statements over the last several years for some reason DO NOT contain a closing admonishment nor are they ever sworn to and notarized. Yep, that means you have to go through the hassle of having the individual come back read and make any necessary corrections on the transcription and sign it under oath before a notary. In an IA Case relying solely on the Garrity Admonishments could get you in trouble unless you clear up any ambiguities.

Here is an example of a closing for Cop Statements:

You____________ have been informed of and understand your Garrity Rights in this matter is that correct?

You__________ have also signed and dated your Garrity Warnings form in this matter is that correct?

Other than the rights afforded you under Garrity vs New Jersey, have I, any other police officer or person promised you anything or threatened you in any way in order to make you provide this statement?

Is the foregoing recorded statement true and correct to the best of your knowledge?

When your statement is transcribed into a type written form will you review it, make any necessary corrections, and sign it as the sworn truth under the penalty of perjury?

2) Any corrections the individual makes on the transcript are initialed.

3) When the individual returns to review and sign the statement under oath, it is golden, and the recording is evidence.

4) It isn’t that difficult.

Again here is the complaint language which Lundgren prepared prior to taking Meidl’s statement, and note that NOTHING in the complaint makes any reference to what Arleth had said during a meeting of the Downtown Spokane Partnership BID Board. It has to be obvious to people that there was discussion between Lundgren and others PRIOR TO taking any statements or conducting any investigation about Arleth’s truthful statements to the BID Board. 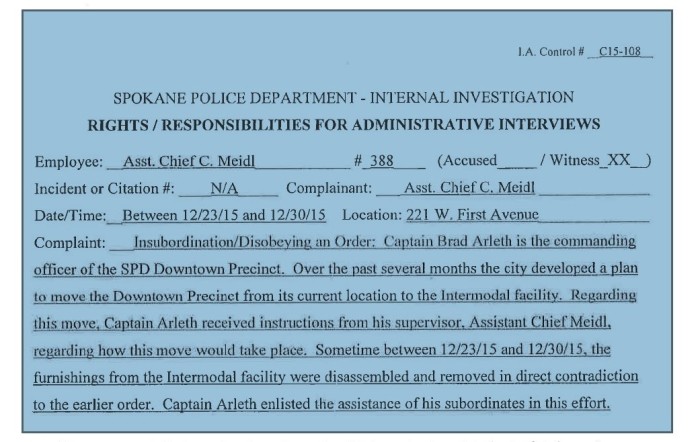 This same language was used in all FOUR statements taken in this case…YES I said FOUR and only FOUR.

I covered the true issue in this IA Case in PART FIVE:

As I noted most experienced IA Investigators know the series of hoops that must be jumped through to make a case against a Public Employee for not properly excersising their free speech rights. None of those hoops were were jumped through by Lundgren making it clear, to me at least, that this case is not about Furniture, and “Insubordination”… it is enitrely about sending a warning NOT TO deviate from the Condon Administration’s flawed plans for SPD, and whether or not the issues are, as the cases law states, “a matter of public concern” or not, you better keep your mouth shut.

Adding to the evidence is the last page of Lundgrens report: 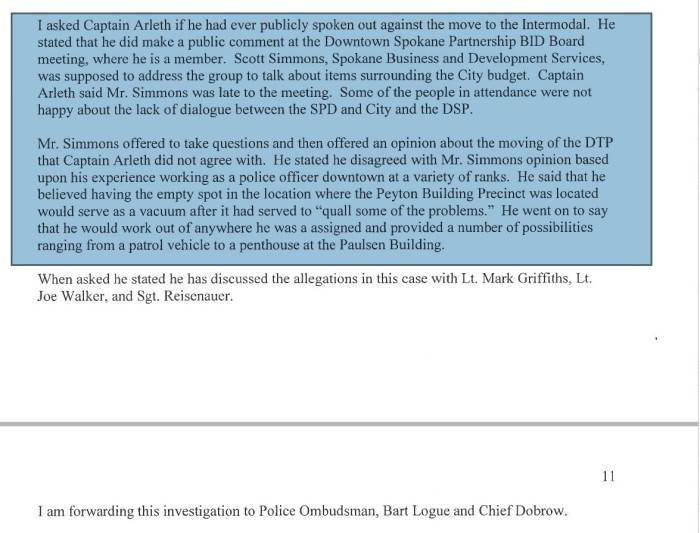 Major Lundgren chose NOT TO investigate the public statement issue…so why is the above in his report…and the big question…”Why wasn’t it investigated?”

As we go through Captain Arleth’s statement please keep in mind not only what I have said above but also what the Use of Force Commission said and what COPS/DOJ said in their Reports! Also consider whether you were a Cop or a Citizen if this what you would want from an IA Complaint. Also consider that the documents used in the IA Case file are what the Decision Makers use to base their “Decisions” on…or at least that is supposed to be the way it works. 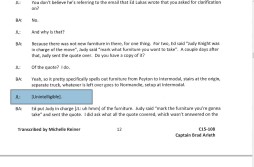 SAY WHAT??? These are just a few of the “Unintelligible” you find through out the statements which point directly to serious problems I mentioned earlier.

Either SPD is not equiped with sensitive enough recording devices to pick up statement conversations or they don’t want to take the proper steps necessary, even though they are a hassel, to make sure the statements are accurate and complete for the decision makers (see above).

This is also bad:

Any Investigator that has taken solely audio recorded statements knows that audio recodings DO NOT RECORD shoulder schrugs, head nodding, or jestures, here it appears there were two and they were to important questions. ALWAYS GET A SPOKEN ANSWER!!!

SO HERE IT COMES…THE REAL STORY!!!

I’m sure that Arleth and his representitives knew the real issue and that it would crop up at some point in his interview so CR (Sergeant Chuck Reisenauer a former SPD IA Investigator) jumps in as someone should have.

Lundgren responds with this:

What Reisenauer is doing here is saying wait a miniute the “Complaint” does not include anything to do with Arleth violating his free speech rights as a public employee and Garrity requires that the questioning be narrowly and specifically related to his duties as a police officer.

Lundgren tries to justify by stating the question is within the scope, apparently because a lack of “enthusiasm” might mean an order was violated because of the recipient of the order wasn’t enthusastic about it:

CR Shoots Back…Can We Talk About This?:

CR Puts A Not So Artful Objection On The Record:

After all that Lundgren again goes to the real issue here…and it ain’t FURNITURE:

You can read for yourself from the IA Report, but Arleth goes on to explain what transpired when he offerd his opinion to the BID Board.

When you do you will see that Arleth does confront Lundgren to an extent regarding what is the real issue. Arleth does it his way…The Breen way would have been like this; “Okay Justin so this bull shit complaint isn’t really about the furniture is it…it is about what I said to the BID Board?”.

Whether you used the Arleth way or the Breen way, the answer would have been the same from Lundgren:

I’m just trying to establish your motive for doing what you did and I’ve been investigating this case since December 30th, 2015…I have taken statements from THREE other witnesses you know…Meidl, Stevens, and Reese.

The Arleth response to Lundgren was; “Okay. I hear what you are saying.”…The Breen response would have been; “I’m glad to learn you are just trying to delve into my level of enthusiasm for the move, that what was said at the BID Board is not an accusation, and you aren’t trying to stifle my free speech rights, that is good to know.”

To somewhat put things in perspective, this fiasco would be somewhat similar to a private citizen agreeing to give a cop a voluntary statement about a theft, and the cop starts asking you about your involvment with a rape. If your lawyer was with you he/she would cut the statement off at that point and walk out the door with you. Because this is a Public Employee Compelled Garrity Statement it gets a little more technical, and experienced IA Cops know what I’m talking about.

When folks like Interim Chief Meidl, Justin Lundgren, and Tim Schwering read my comments above they will say…”Breen you idiot he can question Arleth about anything narrowly and specifically related to his duties as a cop!”. The fact is that would basically be true, but here is your problem guys.

Come on you guys…as you can see Meidl “Pitched The Bitch” in his statement…well kind of anyway. After Meidl’s statement not one ounce of investigation was done to determine if Arleth made an inappropiate public statement. Of course had there been an investigation into Arleth’s public comments at the BID Board, and that hit the media, boy would that look bad, so Furniture must have been the next best alternative.

It didn’t work though did it?

There were two other statements taken by Lundgren in this case, they were prior to the statements of Meidl and Arleth, and aside from the statements themselves and some of the problems I have alluded to earlier…GUESS WHAT???… Despite the UOFC Report, and the COPS/DOJ Report…SPD is STILL in “MAIL IN YOUR STATEMENT MODE.”

As Interim Chief Meidl stated in his email there “are ongoing moving parts” in this case…well there sure are including the possibility of some ethics complainants. So I’ll keep moving as the parts keep moving.