In all likelihood YES! If you are wondering why, the answer is quite simple, the Seabold/Cappel Independent Investigation gave the Public a pretty good idea of a few of the improprieties that go on in Spokane City Government and caused considerable embarrassment to the Politicians involved. The Seabold/Cappel Investigation exposed the concerted effort to hide the truth from our Community, the complete disregard by Politicians concerning Workplace Harassment, violations of the City Ethics Code, and on and on.

The Investigation did of course result in Civil Litigations, some still ongoing, and a number of City Employees quitting their jobs and running away.

Given those facts, an upcoming City Council Election, a lame duck Mayor with further political aspirations, and the local major media outlets unwilling to do their job of informing the Citizens chances are slim to none that an Independent Investigation into a case involving among other things possible criminal conduct will ever take place because it would be a complete embarrassment to the Mayor, City Council, and the Spokane Police Department.

As many folks know I took this Investigative Journalism Gig on out of frustration with the truth almost never being reported to the Community. It’s a dirty job subject to all kinds of threats and name calling but at least I’ve been able to get a lot of the truth, supported by considerable documentation, disseminated to the Public, and I’m fortunate to have so many people willing to provide me with solid information even at their own risk.

The email exchange below will provide you with the truth as to how the Seabold/Cappel Independent Investigation came about. The emails below which began in September of 2015 are just a few in long strings which also included recommendations that the CC try and force Mayor Condon to invoke Garrity to compel statements from his employees, the effort was made, but as we all know the Mayor refused, and many key witnesses also refused to talk to the Seabold Investigator.

In case you haven’t noticed, I don’t have any reservations about making recommendations to Politicians regarding the appropriate steps that should be taken to get to the truth and inform the public, such is the case here: 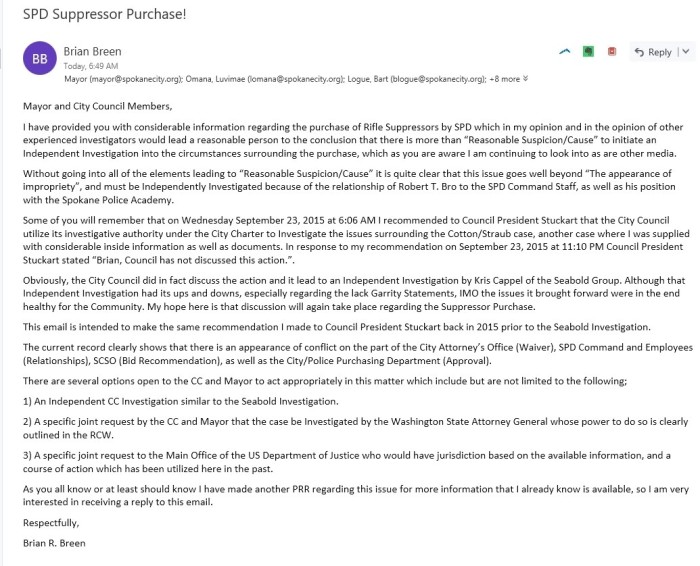 One of the things about this Gig is that when you do bring forward the truth you immediately become “persona non-grata” with some folks which is something to be expected. Although I have not confirmed it, and one CC Member denies it, I was advised that the CC has been told not to have any contact with me. The lack of contact from folks like Karen Stratton, Ben Stuckart, Mike Fagan, and Breean Beggs, all of whom have been pretty good in the past about taking my calls or responding to emails seems to support what I’ve been told, and so be it. Lori Kinnear, Amber Waldref, Candance Mumm, have never bothered so that’s not unusual, and the Mayor is scared to death of me. If it is a matter of considerable embarrassment that might result from an Independent Investigation into SPD’s purchase of Rifle Suppressors okay I get it, certainly even though they are terribly busy with governing us folks one would think with all the information surrounding the purchase I have made public they might at least have some questions, but maybe not and the possibility of criminal conduct on the part of City Employees is just insignificant in the scheme of things.

I don’t know about you, but I found this real amusing!