“The Three Musketeers” is of course Mayor David Condon, Council President Ben Stuckart, and the guy who has been running things behind the scenes since Condon was chosen as Mayor, James McDevitt. They were able to get their candidate for City Attorney, Michael Ormsby a former US Attorney approved by a 4-3 vote of the City Council.

For those that aren’t aware McDevitt is the former US Attorney who brought us the now infamous Frank Straub, and all of the litigations, similar to the Jill Bolton case against Mike Ormsby, from women working for the City of Spokane.

Daniel Walters of the Inlander does a really good job of pointing out in this article Council President Ben Stuckart’s, one of the Ormsby champions, position when it comes to OUR money. Basically, it boils down to the same old story, get elected to public officer and receive a NO LIMIT Credit Card.

One has to wonder how Stuckart’s position regarding OUR money will play out in his quest for a national elected position against Cathy McMorris-Rogers, that is, IF that race ever does come about now that it looks as if Lisa Brown will enter the race on the D side. The question then becomes will Stuckart pull out of the race against CMR and run for Mayor. Either way whomever Stuckart’s opposition is will be sure to bring up his position on OUR money.

So exactly why Ormsby? I suppose anyone could make a good case it is the good ole Spokane Power Structure play and the need politicians have for gaining favor with the powerful Cowles Family who any politician needs on their side around Spokane to have a chance of getting elected.

In Walter’s article, he provides a copy of the IRS Investigation into the River Park Square Case which cost CITIZENS Millions, and continues to do so. Each member of the City Council was provided a copy of the investigation prior to the vote, along with a boat load of other documents that would lead most reasonable people to serious question the appointment of Michael Ormsby.

One of the key elements of the IRS Investigation, for me any way, was this: 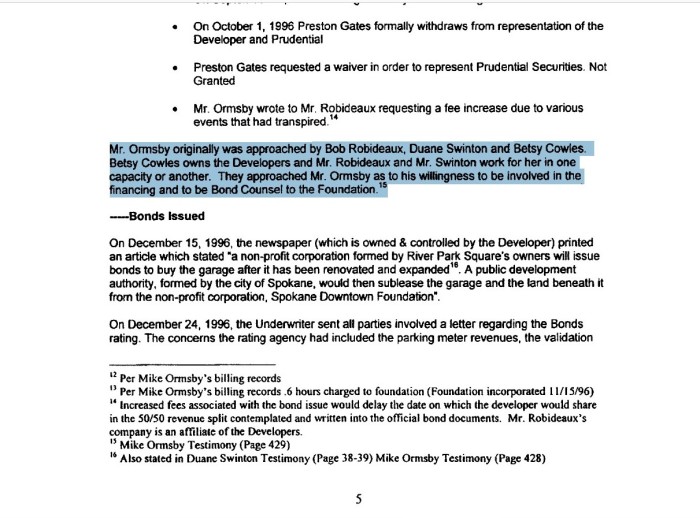 Betsy Cowles, by Ormsby’s own admission, sought him out to grease the RPS deal. Interesting don’t you think?

What is also interesting is all the statements about Ormsby not being charged criminally or sanctioned in the RPS case. Well the truth is beyond the money portion of “Groundbreaking” IRS settlement with Ormsby there was a requirement that other lawyers review his work, if that isn’t a sanction for a lawyer it makes me wonder what a “sanction” actually is, and who besides the Courts will be reviewing Ormsby’s work as our new City Attorney. 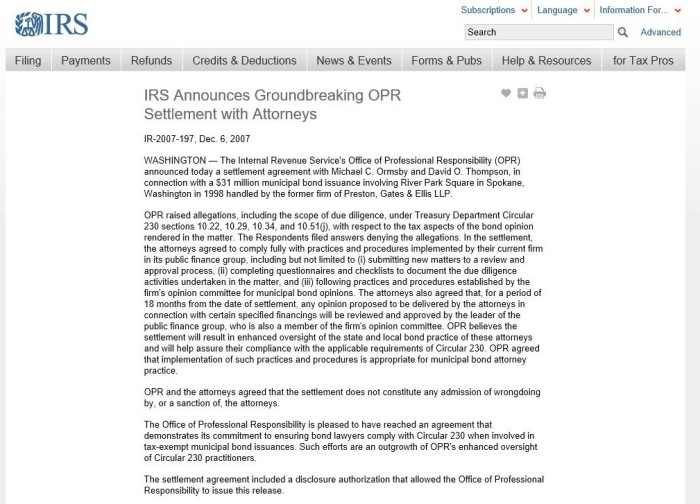 Oh, yes, the good old days of the of the River Park Square, for lack of a better term, “Fiasco” and all the battles surrounding trying to get OUR CITY off the hook, something no one was able to accomplish…remember this?

As far as the Jill Bolton vs Ormsby case is concerned the City Council received a boatload of documents regarding it as well, but apparently, some of the so-called advocates for Women’s Rights weren’t in the least bit swayed and friendships as well as political ideology won out over Women’s Rights. I found it interesting that Councilmember Amber Waldref who claims to be a Champion of Women’s Rights had to attend the Council Meeting from her sick bed to provide the all-important 4th vote to confirm Ormsby. Interestingly Waldref’s sister works in the US Attorney’s Office.

For some reason there always seems to be a reason to resurrect stories I write, here are a few regarding the Bolton Case.

Jim McDevitt did his best of course to portray Bolton as the “Aggressive Bitch” and attempted to assassinate the character of other former employees who contacted the City Council in opposition to Ormsby’s confirmation.

As some of you know I made one of my rare appearances before the City Council to speak in opposition to the appointment of Ormsby. I have to be honest, I kind of enjoy attending those meetings and not necessarily for the meeting itself but for the public conversations that take place between individuals prior to the meetings outside the Council Chambers in the very public Chase Gallery where some people for some reason speak quite loudly and I’m able to pick-up and document what they say. One interesting conversation that took place was between Jim McDevitt, Craig Meidl, Justin Lundgren, and Traci Meidl. I understand why McDevitt was there, but why Mr. and Mrs. Meidl along with Lundgren showed up is beyond me, of course their answer would be because we will be working with the new City Attorney, okay fine. From three feet, away I was able to pick up McDevitt in a sense practicing his presentation before the City Council… basically how it is the “Five Percenters” that take up “Eighty Percent” of an administrator’s time. But what kind of ticked me off was when he used my line “count paper clips”. Of course, when they realized it was “The Buff” picking it all up they quickly moved further away.

As an advocate for an Independent Elected City Attorney, as is Breean Beggs, the cronyism and political dynamics of the Ormsby nomination and subsequent appointment, put me in a position where if we ever do get to vote on it I might put up a yard sign in favor. The problem is, as I understand it that issue is now in the hands of Mayor Condon’s office, so I don’t look for anything until well after the next Mayoral Election.

I opened my email today and found an email from someone I respect who is a close friend of Timm and Mike Ormsby basically expressing the opposite view of mine regarding Ormsby, which I have no problem what so ever with. The funny thing about the email though was a reference to attending the drinking sessions of the “good ole boy club” mentioned in the Bolton lawsuit at “The Rain Lounge” along with the entourage from the US Attorney’s Office…amazing how small this town is!