I thought about not posting this story today because of the wounding of a Spokane County Sheriff’s Deputy last night, but in re-thinking, because Ozzie will read this I decided to post it to get Knezovich thinking about what does not belong in law enforcement.

Using the wounding of a Deputy Sheriff doing his job should never ever be used as a justification to further a Political Ideology and try and justify what some consider outlandish public statements. You keep your damn mouth shut in the interest of the Deputy, the credibility of the Investigation, and the Public perception, until everything is complete and the FACTS are known.

When any of the above are a basis for a Cop’s decision making process, whether it be a lowly beat Cop, or the Leader of a Law Enforcement Agency things will always go wrong and someone will inevitably end up getting hurt.

Sheriff Ozzie Knezovich’s obsession with making every effort to marginalize and discredit individuals who disagree with him or point out the many mistakes he has made, may very well have gotten to the point of Hatred. His battle with people like Matt Shea, Ron Wright, Scott Maclay, Rob Lee, Dave Wiyrick, Brian Breen and others are very well documented throughout the press. I am reluctant to accuse anyone of actual Hate; however, the evidence is mounting that there is Hate in the heart of Sheriff Knezovich towards those that are not afraid to question his decisions, and even his integrity. I personally feel any reasonable person would have to conclude based upon his admissions to me that he was helping to fund Travis Pendell’s lawsuit against Shea and Maclay that Knezovich was the motivating factor behind the lawsuit, and not for any altruistic reasons. Spokane lawyer Doug Siddoway even points out the difficulties with pursuing a lawsuit against a public figure in this interview with Jeff Humphrey whose son is a Deputy Sheriff.

You might recall that Knezovich told me during his video attempt to prove me a liar back on February 1st, 2017 that Pendell had sued Maclay, and we later found that the statement was not true and Pendell did not file a claim against Maclay or Shea until one month later.

How does all the fit into a story regarding Knezovich’s deposition in the Holyk case?

The answer is quite simple; Ozzie’s obsession with Maclay, Ron Wright, and Rob Lee rears its ugly head in his deposition, and as you can see from the images below Knezovich tries to link Holyk Lawyer Mike Maurer with Scott Maclay. Beyond that Knezovich specifically states that the reason “he” hired Orion, and Jarrod Carter who subsequently reached the conclusion that Bodman hit Holyk was because of Maclay, Wright, and Lee. I find that quite odd when you consider that Joe Harrington from the local US Attorney’s Office warned Frank Straub and Selby Smith of the Grant Frederick’s credibility issues.

I have decided to provide you with the complete Knezovich Deposition today rather than waiting and commenting on various portions individually. I made that decision based upon the wounding of the Spokane County Sheriff’s Deputy mentioned above and in hope that Knezovich will for once keep his nose out of the Spokane Regional Investigative Response Team Investigation, and not put another Deputy in the same position he put Bodman in. 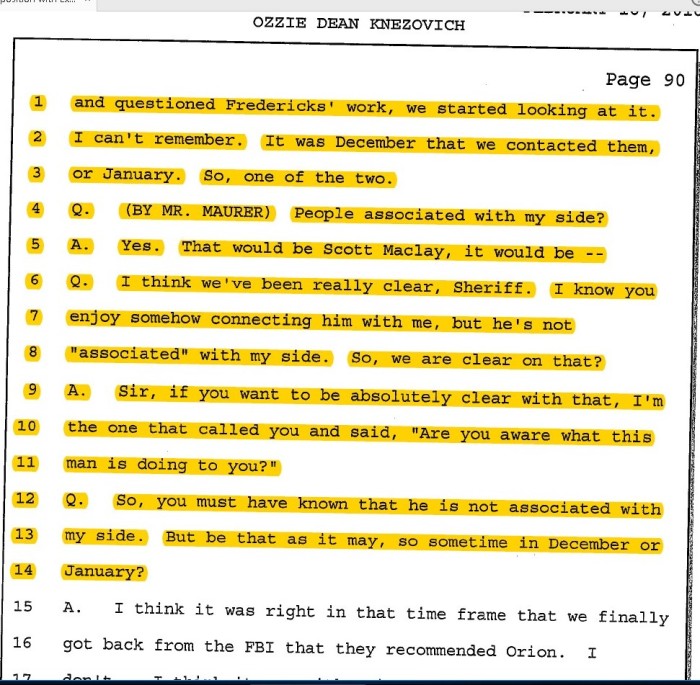