I just got this email from Terri Pfister:

The big question is will the Mayor and City Attorney use the “Ongoing Investigation” exception to the PRA?

And how it relates to my PRRs.

I received a question from a reader regarding my persistence in obtaining Nissen Affidavits, which I am entitled to pursuant to the Public Records Act via my September 5, 2015 Public Records Request. The reader noted that the public employees signing the Nissen Affidavits could easily lie and the average citizen wouldn’t know the difference. That is true, and since a member of the media or private citizen doesn’t have subpoena power they might not ever know if someone falsified an affidavit. PRRs from media and private citizens can however come in quite handy if there is an investigation by law enforcement or some other agency with subpoena power like the City council has, if that investigation is conducted properly. As an example, if an investigation revealed a public employee lied in a Nissen Affidavit there could very well be a criminal violation for such things as Misconduct of Public Officers ( http://app.leg.wa.gov/rcw/default.aspx?cite=42.20 ), etcetera, which would be sound elements for removal from office or recall. All of the players in the Cotton/Straub case, as well as all of the staff in the City Attorney’s Office I’m sure are very aware of what could happen should they falsify a public document.

I think it is pretty obvious that as a member of the media and a citizen my persistence involves getting to the truth.

Below you will find a link to the Washington Supreme Court’s Decision in Nissen, to make it easy I copied the case conclusion and highlighted a couple of things for you:

We affirm the Court of Appeals in part. Records that an agency employee

prepares, owns, uses, or retains on a private cell phone within the scope of

at issue may be public records subject to disclosure. Because it is impossible at this

stage to determine if any messages are in fact public records, on remand the parties

are directed as follows. Lindquist must obtain a transcript of the content of all the

text messages at issue, review them, and produce to the County any that are public

records consistent with our opinion. The County must then review those messages just

as it would any other public record-and apply any applicable exemptions,

redact information if necessary, and produce the records and any exemption log to

Nissen. As to text messages that Lindquist in good faith determines are not public

records, he must submit an affidavit to the County attesting to the personal character

of those messages. The County must also produce that affidavit to Nissen.

requests accordingly. We reserve for the trial court the issue of penalties going

Where we stand now!

Well nowhere actually! I have received Nissen Affidavits from Nancy Isserlis, Rick Dobrow, Leroy Eadie, and Brian Schaeffer, that is it. If you are wondering, why…see above! 🙂

The Nissen Affidavit thing from this “confused Jeremiah”, as Nick Deshais refers to me, kind of threw Terri Pfister for a loop so she had to call in the “Big Guns”. In this case Mr. Pat Dalton from the City Attorney’s Office. You might recall that Mr. Dalton is the lawyer that recently IMO tried to intimidate the City Council into not talking regarding their meeting with Mayor Condon.

As an aside; I’m pretty sure the City Council was about as intimidated by Mr. Dalton as I am and provided their investigator with statements detailing what happened in the meeting prior to Straub’s termination. We of course won’t know for sure until the results of the investigation are made public. If the City Council did provide statements to the investigator, as I suspect they have, Mayor Condon and Pat Dalton know…so the damage control I’m sure is underway.

Here is the email exchange between Mr. Pat Dalton and Myself (I apologize for mistakenly using the suffix Ms. Instead of Mr.): 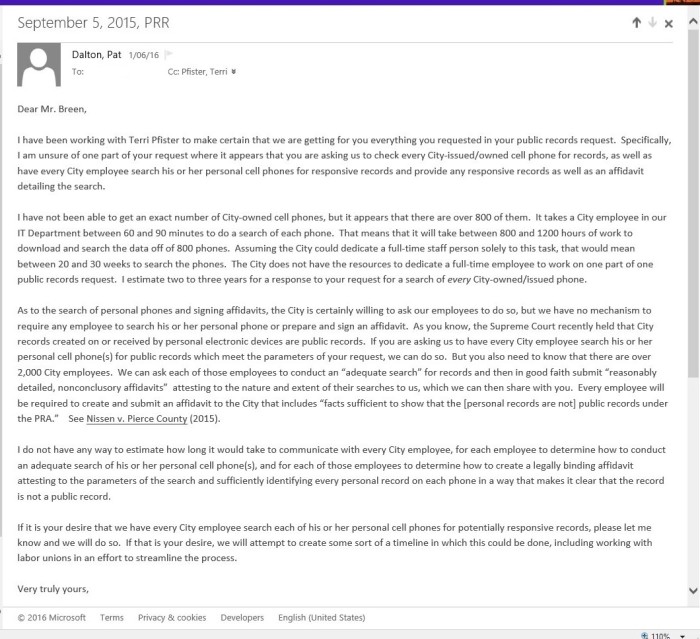 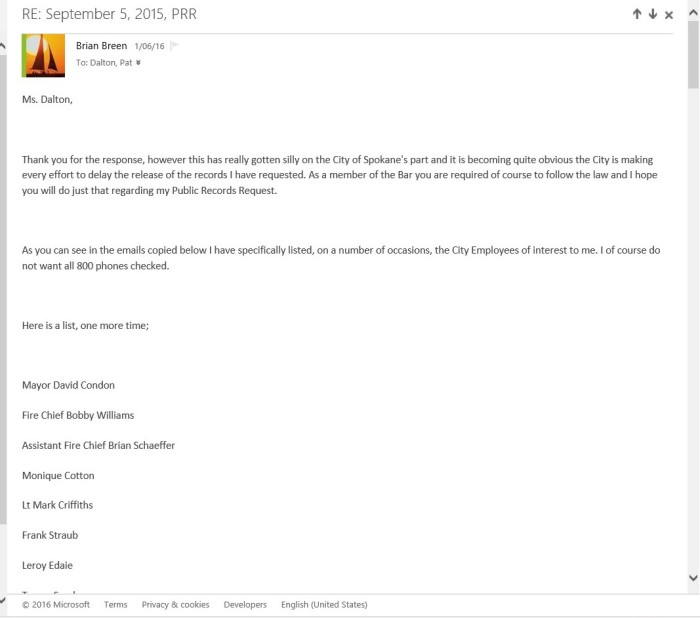 I want to point out a couple of things in the above email exchange that might interest you!

“As to the search of personal phones and signing affidavits, the City is certainly willing to ask our employees to do so, but we have no mechanism to require any employee to search his or her personal phone or prepare and sign an affidavit”

My response as a responsible Investigative Reporter is of course TS find a “mechanism”!!

We can ask each of those employees to conduct an “adequate search” for records and then in good faith submit “reasonably detailed, nonconclusory affidavits” attesting to the nature and extent of their searches to us, which we can then share with you.

Mr. Dalton shares the same opinion of me as Nick Deshais does and thinks I’m a “confused Jeremiah” …good that’s an advantage. I always had to be the Dumb Cop and my Partner the Smart Cop…so I can handle it!

“facts sufficient to show that the [personal records are not] public records under the PRA.”    See Nissen v. Pierce County (2015).

Yes, Mr Dalton I did “see Nissen v. Pierce County (2015), and happened to notice you left out this part!

Where an employee withholds personal records from the employer, he or she

record” under the PRA. So long as the affidavits give the requester and the trial

nonresponsive, the agency has performed an adequate search under the PRA. When

done in good faith, this procedure allows an agency to fulfill its responsibility to search for and disclose public records without unnecessarily treading on the

constitutional rights of its employees.

Thank you for the response, however this has really gotten silly on the City of Spokane’s part and it is becoming quite obvious the City is making every effort to delay the release of the records I have requested. As a member of the Bar you are required of course to follow the law and I hope you will do just that regarding my Public Records Request.

Come on folks…it isn’t what you are thinking…. HONEST! 🙂