Again the public isn’t getting the full story from articles in the Spokesman Review so I’ve taken on the responsibility. A friend of mine, who is an investigative reporter and not from around here, likened what I’m doing to the non-local media “muckraker” who exposed the lead poisoning and cover-up regarding the people in Flint Michigan. I only hope I can do half as well, it ends up being a time consuming and costly task, but if it will improve the Spokane Police Department and City Hall I’ll stay on task.

This article written by Nick Deshais appeared on 1/29/16 in the Spokesman Review.

The article leaves out some important facts regarding the Condon Administration and SPD’s handling of Public Records Requests which is one aspect of the City Council’s “Independent Investigation”, and should have been reported by Spokane’s largest media outlet, but wasn’t, so again the question is WHY?

City Clerk Terri Pfister, who has been burning the candle at both ends as a result of the Cotton/Straub case yesterday provided me with more documents in response to my September 5th, 2015 PRR, the same documents in possession of Nick Deshais and the SR. I will continue to study them and report items of interest, and there are many, but today I’ll deal with some of those that relate to the Deshais story.

The image below of the email from Terri Pfister shows some significant problems with transparency by the Condon Administration and SPD, it also raises many questions.

Note that Ms. Pfister states that as a result of a December 3, 2015 PRR submitted by Deshais (I haven’t received a copy yet) “three sets of notes were located by members of the Spokane Police Department.”.

Ms. Pfister then goes on to state that those notes (the cops just found) should have been provided to both Deshais and me in response to his August 18th, 2015 PRR and my September 5th, 2015 PRR. So why weren’t they? This is pretty typical when one does a PRR, things start to show up when the heat is turned on. Keep this in mind as you read on!

In the story written by Deshais he does not provide a link to the “notes” he received. Providing the public access to the original used to be standard practice at the SR, however that has changed since some dastardly, “confused Jeremiah”, muckraker started to point out the discrepancies between the actual documents and the news stories. So I will provide them to you, but in doing so I want to be clear these are NOT NOTES, by anyone’s stretch of imagination, and Mary Schultz’s statements to Deshais in his story are dead on. The actual notes, if they exist, are subject to the Public Records Act, and subject to disclosure in the Straub lawsuit, as are “Angie’s meeting minutes” and other stuff. I will also provide images of the document properties which any good investigative reporter knows are important for getting to the truth and you can draw your own conclusions. 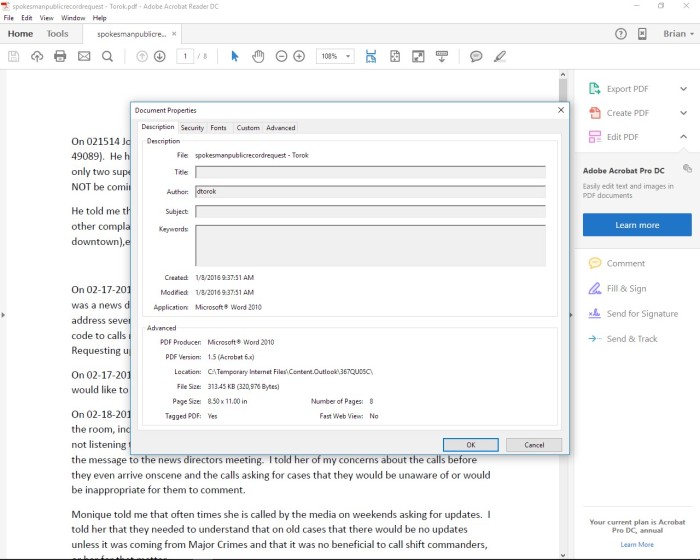 I find the addition of the Carly Cortright complaint in the Deshais story both funny and ironic since I have been harping on the importance of her information since she was transferred from SPD to City Hall, in emails to other media including SR reporters, the City Council, my Twitter account, this Blog, and more. I will share one with you from Cowles owned KHQ the others are hold backs.

I have had the pleasure of being involved in the past with Carly Cortright and her transfer from SPD was ridiculous as she was one of the best civilian employees they had. I share her concern regarding the “Independent Investigation” being conducted by Kris Cappel, from what I know of the investigation so far I’m not impressed. It is important to note that Cortright’s complaint supports Cotton’s complaint. 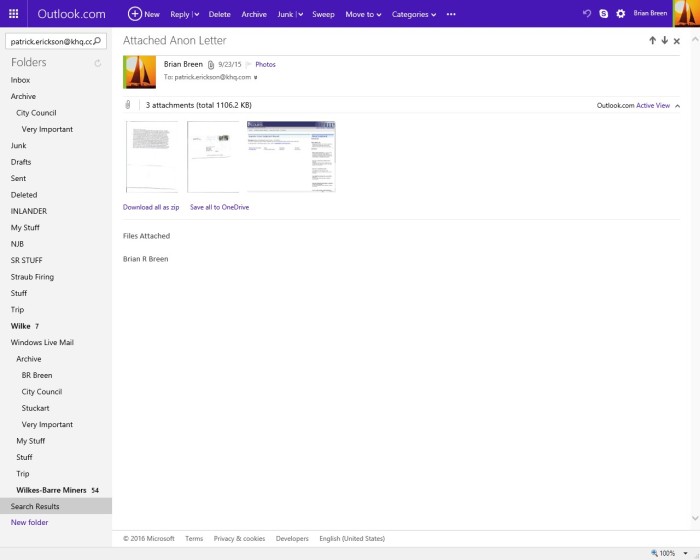 Needless to say once I asked Erickson for interaction via email so I would have a record, I never heard back from him again. Take note of the dates on the emails.

Also included in the documents from Ms. Pfister was another Nissen Affidavit this time from Leroy Eadie, who uses his private cell phone for public business. Again the reason these are important is IF the “Independent Investigation” subpoenas the cellphone records of the players which is standard investigative operating procedure and those records were not provided in response to PRRs someone is in trouble, and that could explain why the Nissen Affidavits are very, very, slow in being produced.

I have more coming later this week regarding Tim Schwering being sent to the Basic Law Enforcement Academy even though he failed the SPD exam. Other media have picked up on this story and confirmed the information I have through their independent sources however I want to give the City Council one more day to respond to my requests for comment. They have not responded nor provided a reason for not responding. The Tim Schwering issue has nothing to do with the Cotton/Straub investigation or the lawsuits so there are no reasons for them not to respond.

Started in 2012 and have mountians of documents to prove it! 🙂 🙂

3 thoughts on “UPDATE PRR… NOTES, PROBLEMS, AND THE “INDEPENDENT INVESTIGATION”!”