For some reason that isn’t always as easy for me as it is for Shawn Vestal when it comes to Sheriff Ozzie Knezovich. 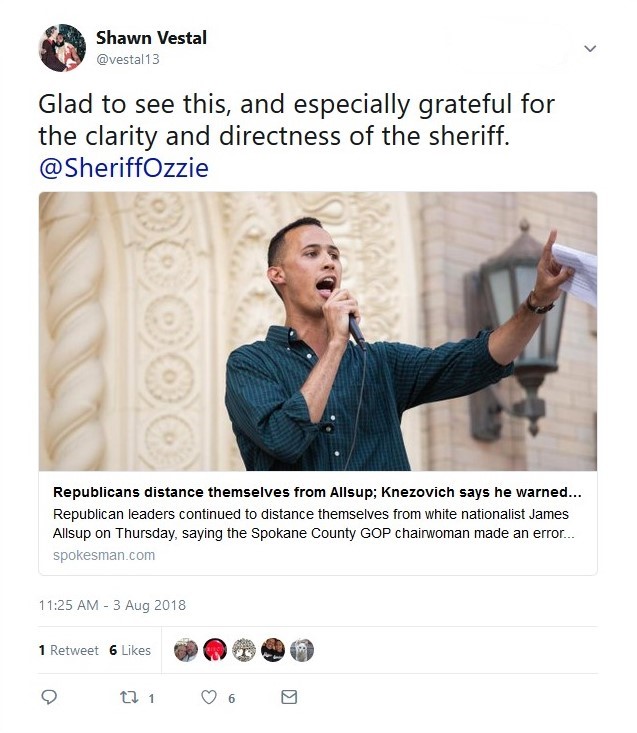 The documented friend/enemy relationship between former GOP State Committeeman Brian Standow and Sheriff Knezovich certainly brings up many questions with respect to “The Standow Video”.

Although the Standow Video was posted on YouTube sometime well after the Zillmer Officer Involved Shooting it was quickly taken own for some reason, and at this point we don’t know by whom.

The Zillmer OIS received National Attention because Jed Zillmer was a troubled and decorated Iraq War Veteran and although the Liberty Lake Officer’s body camera footage was widely disseminated the Standow Video was not.

Now that the Standow Video has resurfaced some four years later there are a number of questions that need answered and hopefully I will be able to do that however at this point there isn’t “clarity”, or “directness”. Any reporter looking into the issue would most certainly ask the question of Sheriff Knezovich “Did Brian Standow provide you with a copy of the video his daughter took of the Jed Zillmer Officer Involved Shooting as he claims he did?”

I did just that: 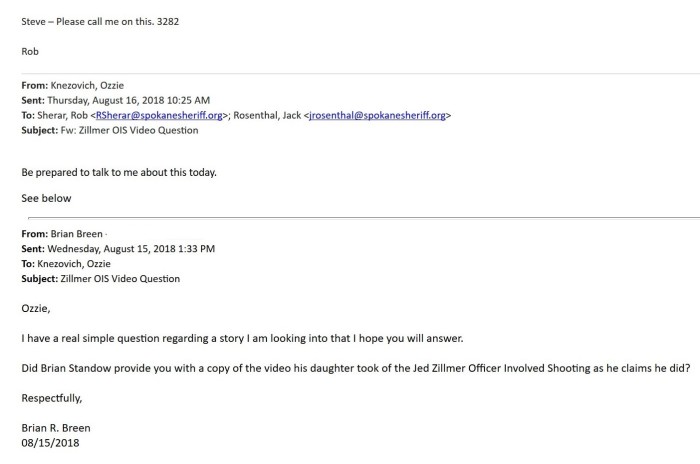 Here is where I see a lack of “clarity” and “directness”. You will notice that after I asked what I thought was a simple question Sheriff Knezovich sends an email to his staff Rob Sherar and Jack Rosenthal stating, “Be prepared to talk to me about this today.”.

That could be a good sign if Ozzie is going to diligently look into what happened with the “Standow Video”, even though my question is yet to be answered.

As far as clarity and directness goes things become even less clear and direct when I receive this response to my simple question from Spokane County Prosecutor and County Public Records Officer Steven Kinn.

I’m not sure exactly what “the Sheriff’s” means in relation to my question, nor do I understand why answers to this reporter’s questions have to be delivered by a Prosecutor, unless of course there is an ongoing investigation of me?

I did follow-up with another simple question to Prosecutor Kinn which I hope someone will answer at some point.

A number of questions which remain unanswered:

In order to try and answer some of those questions I have submitted one of those dreaded PRRs to the Spokane Police Department who acted as the lead investigative agency for the OIS.

To be quite clear I am not in any way suggesting that the Zillmer OIS wasn’t Justified, based on the available evidence it sure as heck appears that it was. My primary concern is whether or not all of the evidence was collected and analyzed.

The only written document I have available to me at this point is Spokane County Prosecutor Jack Driscoll’s review of the OIS.

There are a few things that standout in Driscoll’s to someone who has investigated and reviewed OIS Cases, and again not from the standpoint of whether or not the OIS was justified.

Most experts would agree that the standard for Officers involved in OIS cases is to be able to justify each round they fire, and the Standow Video could possibly have aided in doing so, or on the other hand perhaps it wouldn’t.

Here are a few things that strike me:

Deputy Melville stated that he heard “a single gunshot, then multiple others.”.

If the Standow Video was enhanced and analyzed including the audio it might have provided some insight as to which Officer or which weapon was first to fire.

According to Driscoll’s review a total of 18 rounds were fired by Officers from rifles, shotguns, and handguns. Some might think that is a lot of rounds, but it is something that is not uncommon in Officer Involved Shootings and the question always comes up whether or not the number of rounds fired was the result of “Contagious Shooting”.

Prosecutor Driscoll’s review of the Zillmer OIS seems to suggest that Deputy Thurman was the first to fire however it is hard to tell. Thurman according to Driscoll’s review fired three rounds at Zillmer’s head with his AR-15.

It is my hope that the meeting Ozzie had with Rob Sherar and Jack Rosenthal is the first step in getting some clear and direct answers to go along with “High Standards + Accountability = Professionalism.