There are of course Bench Bar Press Guidelines in the State of Washington for public statements made to the press by lawyers and law enforcement that they as well as the press are supposed to adhere to, but what the heck those are only “Guidelines”, so why pay any attention to those darn things…right?

John Henry Browne, Richard Aguirre’s Defense Lawyer must be just loving some of the Spokane Press, a lawyer whose reputation precedes him when it comes to things like this. It kind of makes me wonder out loud whether there are book and screenplay rights attached to the representation agreement between Mr. Browne and Mr. Aguirre.

If a defense lawyer can try his case in the media pre-trial without the media questioning anything, why not give it shot and try put the defense theory, or in this case, theories in the publics mind before a jury is even empaneled…if you can get way with it why not do it… right?

The media can always help the lawyers cause by not fact checking or writing inaccurate information as was the case in this Spokesman Review Story.

This statement made in the SR story isn’t the least bit accurate, but then again neither is the spelling of John Henry Browne’s last name.

I can tell you with absolute certainty that none of the 41 pieces of evidence submitted to the WSP Lab on February 3rd, 1986 at 11:30 AM were submitted for DNA testing, they were however submitted for blood and other testing. I can also tell you with absolute certainty that the WSP did not do DNA testing in 1986, there were very few labs that did DNA testing. As a matter of fact, the FBI Lab didn’t even have a DNA Unit until 1988 and even then, they hadn’t compiled a data base as large as the two primary DNA Labs, “Lifecodes” and “Cellmark Industries”, both private labs who did most of the Law Enforcement DNA Analysis. Just a quick read of the Ruby Doss Murder Investigative Reports would have given any reporter that information, or even a quick call could have provided accurate information.

Is the fact that in 1986 the evidence was NOT submitted for DNA testing important? I guess we will have to see how that plays out if charges are refiled and it ends up in trial.

This one is a real beauty!

How often does a Defense Attorney come out publicly during the media manipulation period saying the Prosecution did a great job, they must come up with something and saying it was a good investigation probably wouldn’t sit too well with the client.

Three hundred pages of motions a lot if it dealing with DNA? Well hell yes, any defense lawyer would motion the crap out of the court to keep evidence that Mr. Aguirre’s DNA was at the scene of a murder out of the trial and especially since it would completely ruin the original Defense that Mr. Aguirre was thousands of miles away in the military.

The obvious question a reporter would ask Mr. Browne after his statement would be:

“So, Mr. Browne, exactly how many of those motions did the Defense win?”

“Was the Court going to allow evidence of Aguirre’s DNA being found at the scene of the murder to come in at trial?”

“If the State refiles the case will the DNA evidence linking Aguirre to the scene be heard by the Jury?”

It looks like Mr. Browne answers the last question and provides a peek at what Mr. Aguirre’s Defense will be if the case is refiled and goes to trial in a far more balanced and accurate PNW Inlander story. 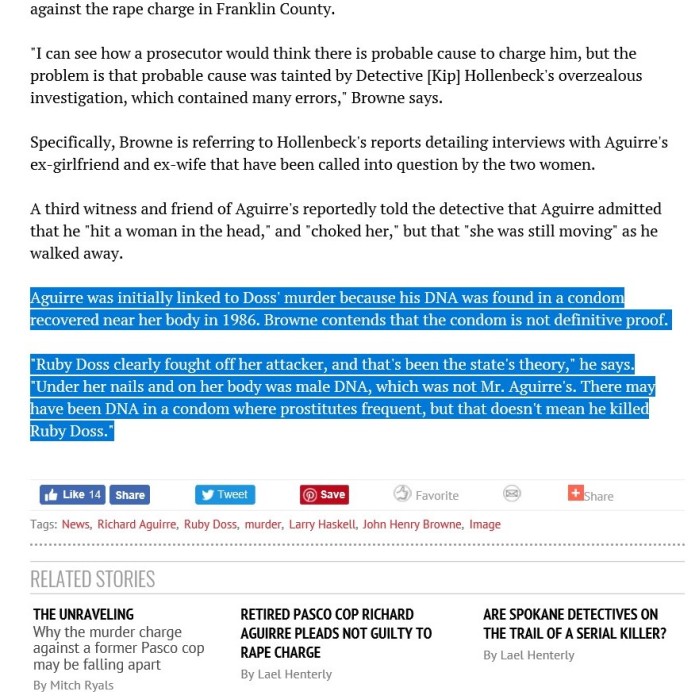 “Browne contends that the condom is not definitive proof.” It appears to me that Mr. Browne is conceding that his clients DNA was in the condom and is giving away his Defense strategy if the case is refiled and retried, a strategy which would likely go something like this;

“Members of the Jury, just because my client’s DNA was identified in the condom located at the crime scene doesn’t mean he murdered Ruby Doss, it just means he may have had sex with a prostitute in that area.”

I can hear it now!

The truth is that the media play by the Defense began back in April of 2017 long before the new developments, when Mr. Aguirre had an hour-long interview with Mitch Ryals of the Inlander. There is some great stuff in the April 2017 story from several perspectives. I love this one. 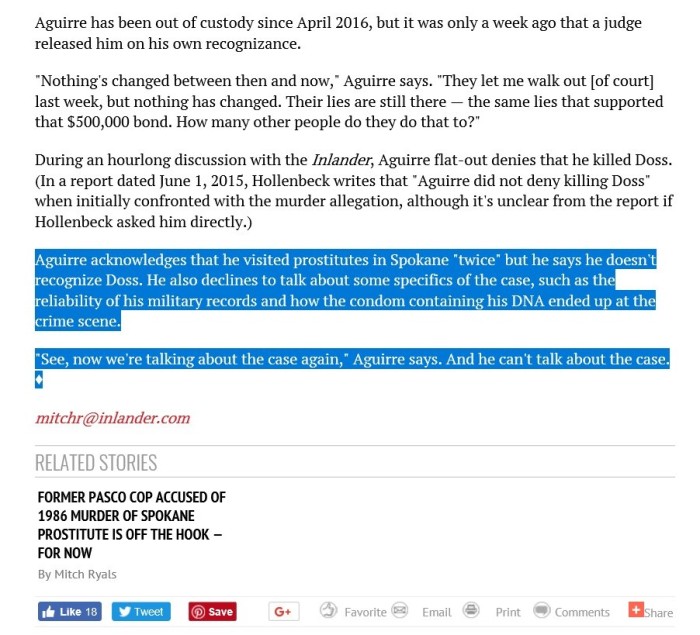 So, what’s cool from the Prosecution perspective about Aguirre’s statement to Ryals that “he visited prostitutes in Spokane “twice”….”? I’ll tell you what’s cool, and Mitch Ryals even covers it in the same story.

Aguirre’s statement to Ryals specifically corroborates the important and significant statements made to police by Aguirre’s friend, Lawrence Cole. The big question in my mind is whether Detective Hollenbeck recorded interview statements of Lawrence Cole? If Hollenbeck did record the Cole interview it would be pretty darn hard for Cole to back track and recant as is often the case with witnesses and especially in murder cases where the Defense has an opportunity to interview them and in some cases, try and turn them around.

Well Mitch… if I were back in the saddle… I’d be knocking on your door! 😊

In the SR story we find this statement:

This also makes perfect sense to me Mr. Browne: 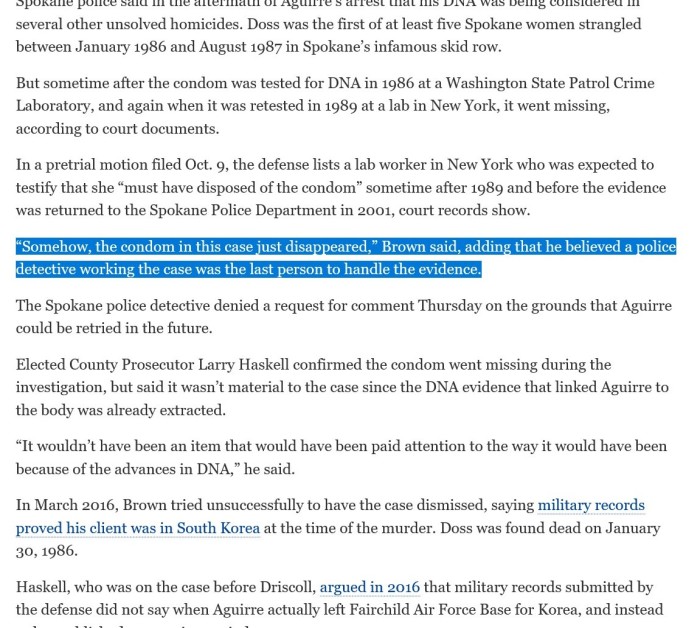 Even though your own witness admits it was she, it’s is always a good tactic to throw in the good ole, it was the rotten cops that did it line (I wish I had a nickel for each time it happened to me), which works if no one bothers to ask a few questions…like for example;

“Wait a second Mr. Browne your own witness said she disposed of the condom, and now you are alleging that Hollenbeck got rid of it for some reason… is that correct?”

“Mr. Browne do you have specific evidence that Hollenbeck disposed of the condom as you appear to be alleging, if so what is the evidence?

“If the condom contained your client’s DNA why would Hollenbeck want to dispose of it?”

Pretty simple questions I would think, but there are many other unasked and unanswered questions that may be answered if the case is refiled and tried.

Is working the media SOP for Mr. Browne? This story might answer the question for you.

“His best work is not in a court of law, but really in a court of public opinion. He’s a master at humanizing his client, and that’s an important role,” said Dan Satterberg, chief prosecutor in Seattle’s King County, where Browne is based. “He is accessible and quotable. And he loves to talk to the media. He doesn’t waste any time getting a positive portrayal of his client.”

This story undoubtedly will raise some eyebrows! Yes, I was the Lead Homicide Investigator on the Ruby Doss case back in 1986, and yes, I will be a witness if the case is refiled and retried, and you don’t ordinarily see a witness writing a story like this but even if Hollenbeck, Haskell, Driscoll, or the other assigned Prosecutors don’t like the fact I wrote this story, in my view it had to be written to set some of the record straight. I’ve been careful not to discuss the evidence specifically as hopefully the truth, whatever it might be, will come out in a trial and justice will be served for both Mr. Aguirre as well as Ruby Doss.

Yes, that little girl lying dead on the autopsy table was a Prostitute like others I have seen on the same awful table, but she was also a human being, just like you and I, she was a daughter, a sister, and a mother. She laughed, she cried, she sang, and she danced, not unlike all of us, she deserves her day in Court just as Richard Aguirre deserves his right to prove his innocence, anything less for both would be a travesty.

It would be easy for some people to just forget about the Prostitute Ruby Doss, well I can’t, I still see her, and I always will, but I don’t get to see her the way others have, the picture I have in my mind isn’t pretty or full of life. African American Prostitute or not, NO MORE GAMES, NO MORE STRATEGY, NO MORE ACCUSATIONS, JUST LET THE JURY DECIDE WHAT THE TRUTH IS!!!