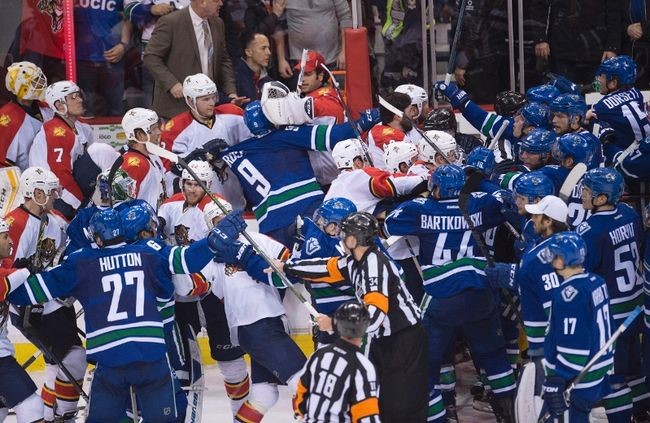 OPO Bart Logue is filing a complaint against Debra Conklin with the proper folks, Human Resources I believe.

All of this could have been averted had the Mayor and City Council worked together to take the proper steps to remove her when they had more than enough evidence to do so.

The only reasonable step now is to remove Conklin from the OPOC for the duration of the Investigation to prevent her from doing any further damage to the credibility of the OPOC and OPO ala Rachel Dolezal.

The Saga of the OPOC v OPO has now reached the bench clearing brawl stage. The good ole thanks for your time but your gone action wasn’t taken when it should have been, so the likelihood of litigation and embarrassment looms.

Few folks showed up for the OPOC meeting despite my story that it might be an exciting evening, by my count including me, it was 6. Which kind of surprised me since Deb Conklin had tried to rally her troops from the Spokane Police Accountability & Reform Coalition to attend, I guess to support her as she handed over the OPOC Chair to someone else. When I saw Conklin’s compadre Marianne Torres there I knew she would be up at the microphone passing kudos Conklin’s way, but she was the only one that did. If you don’t know who Marianne Torres is she is an activist which a simple google search will reveal to you her position on a lot of things including police and military folk. I am not one of Marianne’s favorites, I’m not sure why because we both have the same agenda when it comes to police oversight, could be the former Marine, Cop thing but c’est la vie as the French say.

I showed up because I happened to be on the Agenda about the Public Records Request I had made back on May 21, 2017… remember the “POS” “Dead” cellphone one, which btw is still an ongoing battle. Because of that PRR I needed to get Conklin and others on record which I knew would require some forcefulness or bullying depending upon your perspective. New OPOC Chair Ladd Smith did do a good job of cutting off my “interrogation”, so I think he will be able to handle his new job pretty well, although I would guess he hopes I don’t show up too often.

Aside from what I was able to get on record concerning my PRR, the show was great especially Gita George-Hatcher’s presentation regarding how Civil Service works. She did leave out the part about how the Civil Service Process has to be unbiased, nondiscriminatory, fair and nonsexist, as an email in my possession and disseminated to the Mayor, Civil Service, City Council, and others alleged. To be more specific the email I referring to states this:

“I am sending you, Deb and Ladd separate emails. But, the message is the same — I think it’s absolutely ridiculous that Marty is being let go because she did not pass a typing test! I think it’s very sexist in this day and age to even have a typing test. Her job is more than just typing as you know. I have already emailed Ben Stuckart and David Condon asking for their help. I am also thinking of sending an email to all of the city council members. I am not afraid to go to the media if I have too. I just wanted you to know. Thank you.”

If you haven’t been following my stories part of the Saga is who gets to hire and supervise the OPOC Coordinator, so Gita was there because there is a battle between Deb Conklin and apparently Breean Beggs and the OPO over who should hire and control the OPOC Coordinator Position.

Even though the date of the email may later become important I’m not going to get into the above email too much because I think the sender now has a grasp of just how misguided it was, and I believe the impetus behind the email was from Deb Conklin who was pulling out all stops to try and keep her control of her confidant and UC operative, for lack of other terms in her fold, Huseman who had failed the Civil Service typing exam more than once, also in my view Gita George-Hatcher successfully put an end to this over-reach and attempt to control BS.

***NOTE TO GOVERNMENT WORKERS AND VOLUNTEERS!!!

If you are trying to create a hostile working environment to get someone you despise to quit don’t think you won’t get caught by waiting until they are out of town on government business for the backstab.

When you send an email to honorable employees intentionally leaving out the target of your hostility like this one you will get caught.

See the problem is when you send an email like Conklin did above to an honorable person like Gita George-Hatcher she will read right through your very poorly disguised power play disruption plan and include a copy of the response to your target.

When an individual is on a backstabbing power trip and doesn’t have the character, honor or fortitude to address the issue face to face you get this! 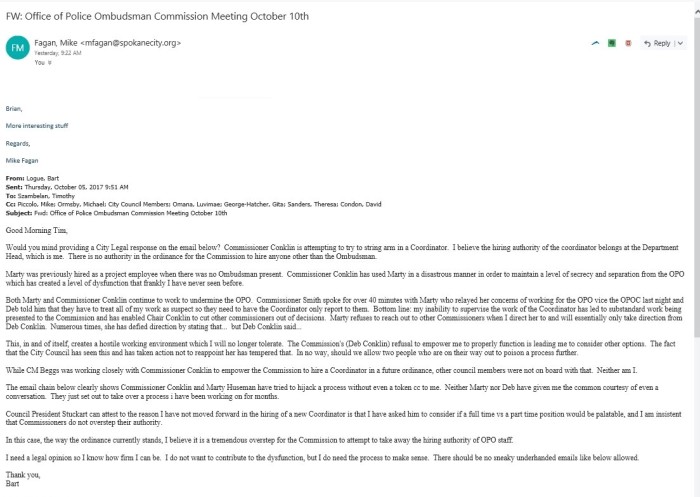 NOW FOR SOME TROUBLING STUFF!!!

If you watch the OPOC Meeting video you will see plain as day that City Council member Beggs has been providing the OPOC with LEGAL ADVICE.

During the discussion of who has the power to hire and supervise the OPOC Coordinator position Conklin and Vice Chair Smith brought forward that despite the written opinion of the City Attorney that the power lies with the OPO, Council member Beggs had gone to the City Attorney, apparently had some discussion with the City Attorney and communicated to Smith and Conklin that he disagreed with the City Attorney’s opinion based upon the NON- EXISTENT new OPO ordinance he was working on. Conklin of course tried hard to use the contrary Beggs opinion she was given to further her power play. Her attempt didn’t work and Smith rightfully pointed out that the new proposed Beggs ordinance does not exist (Nor does it have the CC votes to pass) and the OPOC is subject to the current ordinance.

If I get the urge to attend another OPOC meeting keep in mind that I might be old and I might be slow but I seldom overlook the appearance of impropriety and yes when I returned to microphone to speak regarding the PRR issue and started with the Beggs contrary opinion it was an “interrogation” technique. Both you and Ms. Conklin were already on record regarding the misguided Beggs opinion and providing the opportunity for someone to try and dance around on the record statements simply solidifies those statements… JUST SO YOU KNOW!! 😊

In the interest of complete transparency, I did contribute to the Council member Beggs campaign for election to his current Council seat. However as is documented in an email exchange and to be clear he expects and I always adhere to, if I see something I don’t like, Conservative, Progressive, Libertarian, Socialist, Communist, etcetera I will without question express my displeasure.

I accept your apology for calling me an “ass” when I was just trying to get information. I understand your current frustration and I was not offended in any way. To be clear however, had you used the good ole Marine Corps term MAGGOT I would have been offended…so keep that in mind during future contacts as well as Cop cases you review!