Not only did SPD try and hide the McMurtrey case from the OPO, the Media, and the Public, Chief Craig Meidl lied to the press and the public about the true circumstances surrounding the case.

This statement made by Craig Meidl to Nina Culver of the Spokesman Review where Meidl attempts to blame not disciplining McMurtrey on the Guild Contract couldn’t be further from the truth.

An internal affairs investigation was launched but had to be suspended because there was no policy in place to govern how and when body cameras could be used in disciplinary procedures, Meidl said.

“We weren’t technically able to use it in a punitive manner,” he said.

McMurtrey couldn’t be disciplined based on the video but he could be reassigned and given extra training, Meidl said. The case also could not be referred to the police ombudsman since there wasn’t an active internal affairs investigation, the chief said.

“We did everything we could, based on the law,” he said. “In my view, we sent a message to him.”

SPD Chief Craig Meidl called McMurtrey’s behavior “atrocious” during a news conference last week. An SPD supervisor filed a complaint against McMurtrey after reviewing the footage, but because SPD does not have an official body camera policy, the officer could not be punished, nor could the case be forwarded to the police ombudsman. Instead, Meidl says, McMurtrey was removed from the SWAT team and sent to desk duty.

As you can see from the IA Report McMurtrey knew damn good and well he screwed up big time, his conduct was recorded on the Body Camera Video and was also witnessed by ASU Researcher Natalie Todak, so he provided a written confession on January 12th, 2016.

Beyond McMurtrey’s confession of January 12th, 2016 he again confesses during his Garrity Statement. I have no idea how many Garrity Statements I have read in four decades of doing investigations, but McMurtrey’s Six and One Quarter page 15-minute statement ranks right up there with some of the worst. As far as SPD’s Garrity statements are concerned the ones I’ve read are short sweet and little effort is made to get to the facts.

There are certain things any investigator or someone responsible for IA oversight would look for in reviewing and analyzing an IA report including the dates and times various reports were made, the lack of critical witness statements not taken, and a number of other things.

There only statement taken in the McMurtrey IA case was the 15-minute statement of McMurtrey taken by Staben, who must have known prior to taking the statement that McMurtrey had an extensive IA file and 26 Use of Force Cases which included the Duffney Case on January 10th, 2016 the day after the Lacey case and one day later on January 11th, the Victor Case. Both Staben and Meidl also certainly had to know about McMurtrey’s two previous Officer Involved Shootings including this one.

NOTE: You might want to take notice of McMurtrey’s use of a LNR-level I on a handcuffed subject in the William Victor case above, as it might interest you If I ever get a response to this other PRR of mine which is driving some folks at SPD Bonkers.

It appears only one SPD Cop recognized the gravity of the situation regarding McMurtrey and the liabilities associated with McMurtrey. 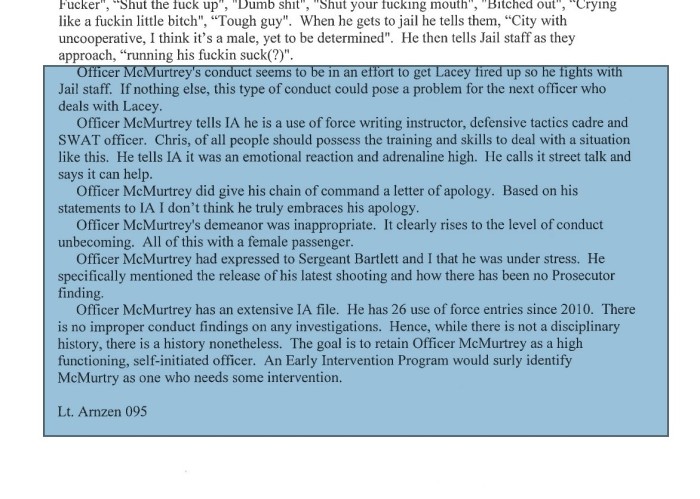 It wouldn’t surprise me in the least to see Lt. Arnzen moved out of IA soon, if he hasn’t already been. As I have mentioned before Arnzen was an officer who came forward in an Excessive Force IA Case I had when I was on SPD. The case was against an officer who should have been fired but wasn’t and now has one of the longest IA Histories on SPD. I’m sure that having mentioned that in the past makes Arnzen a prime suspect in McMurtrey’s IA Complaint.

The unmitigated TRUTH is that despite what Meidl says, with independent witnesses, and two signed confessions you don’t need the Body Camera Video, and the time line clearly demonstrates that, so save the “Fruits of the Poisonous Tree Doctrine” backpedal for people that don’t know any better.

Then why do you continue to not own it, rationalize, and minimize at every turn???

The Fade and Forget Strategy is in play, but despite my age there are certain things I don’t forget!

I want to be clear that at this point there is NO EVIDENCE whatsoever that McMurtrey was disciplined for his conduct by riding a desk for a year, to the contrary the evidence including what I have beyond the PRR response indicates nothing was ever done nor was there ever any intent to do anything, the question is WHY? When one talks about SPD’s Culture one has to take into consideration all of the various relationships including kin that have develop over the years and how those relate to the culture in trying to get to the root of the problem, and Meidl knows exactly what I’m referring to as far as McMurtrey is concerned.