Sheriff Ozzie, as he likes to be referred to, seems to be unwilling to respond to legitimate questions regarding documents that call into question not only his leadership but also his veracity.

In most cases when I have asked questions of OUR elected Sheriff, I get a quick response which includes some kind of a caustic remark. Such is not the case regarding follow-up questions to this story.

The above story was a follow-up story to this one.

The questions were simple and direct and as of yet go unanswered which undoubtedly will require further investigation via the Public Records Act, a law Ozzie has distain for as its use tends to call into question the statements he makes to the Public and the Media, as opposed to statements, and evidence in public documents and under oath.

The second story linked above, shows some of Ozzie’s responses to the Spokesman Review article about Phillip Waine Tyler’s attempt to run for Spokane City Council, and the rave reviews the Wizard gave him.

Why an individual like Tyler where there is no available evidence that he has ever registered to vote would be interested in a City Council Position is well beyond me.

Not registering to vote is one thing, but to be elected as a Delegate to the Democratic Precinct Caucuses is another. 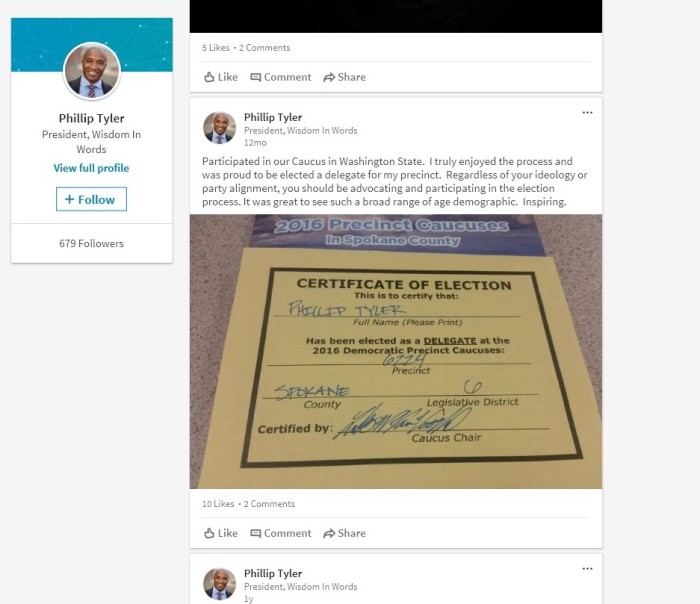 I’m sure that this story will cause some people who don’t know me to accuse me of being a racist bigot, nothing could be further from the truth. The fact is, I brought up the Phillip Tyler issue during the Ozzie/Buff Episodes not only out of my own concerns about Tyler and his close relationship with Sheriff Knezovich and Chief Meidl but also concerns expressed to me by others, including really GOOD COPS. You folks pay me a great salary with great benefits so I took on this job of getting the truth out knowing full well I would be subject to being called names, and efforts would be made to silence and question my veracity. That isn’t a big deal to me! Getting to the truth in Spokane is far more important than any slings and arrows that might come my way, and keep in mind that TRUTH IS THE ULTIMATE DEFENSE!

Trying to get a handle on the issues involving race relations when never ever happen when the key figures in the game are nothing more than PLAYERS, with a self-serving agenda, and that is exactly how I view what is going on in Spokane, as usual… TOO DAMN MANY PLAYERS… each with their own self-serving agenda. Players use other players to get what they want, and help them to look good in the Public Eye.

In Spokane, we continually repeat our history because people ignore it and want to completely forget about it, sweep it under the rug, and pretend like it never happened. It is always difficult to get those types of individuals to wake up, primarily because they absolutely refuse to accept the truth, and want to ignore it and let it fade. 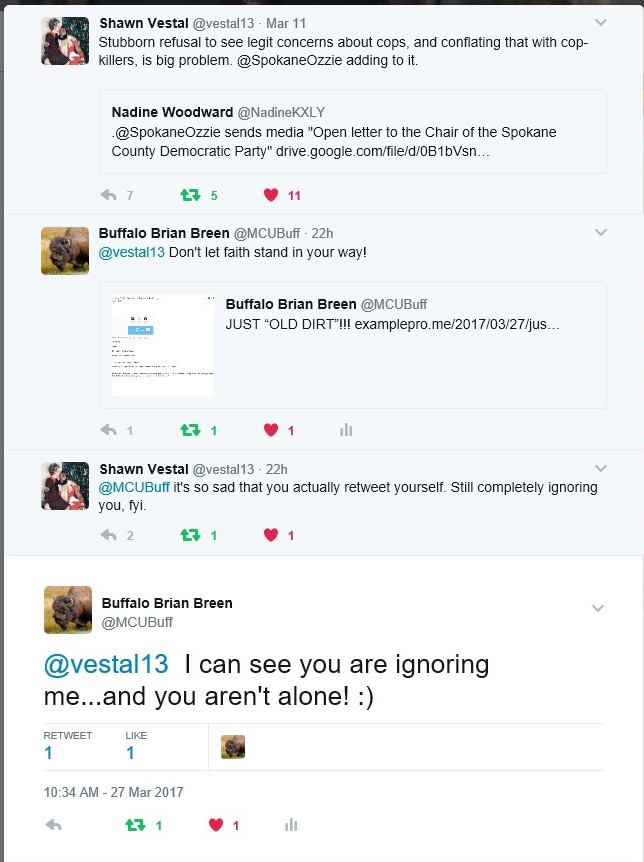 We all know about this story Vestal wrote.

As well as his half-assed Mia Culpa.

“But what has nagged at me for weeks was the sense that it was a mistake given what I knew then – nothing concrete, but a continuous sense that there was something hinky about the report or about Dolezal, and that her tendency to race into the spotlight and juice up details – to get the bigger gun – should have influenced me more than it did.”

Vestal even got a mention by former Spokesman Review Reporter Kelly McBride in her Poynter story.

“I probably didn’t even give it 15 seconds of thought,” said Vestal, a columnist at The Spokesman-Review, during a phone interview this week.

Perhaps Vestal should give more than just “15 seconds of thought” to exactly what is going on now, and he isn’t the only one. He probably also should have given some thought to the warning he was given prior to his writing his now infamous Rachel Dolezal story…yes Shawn I know.

Vestal, understandably is not a fan of Matt Shea, nor is he a fan of the Republican Party, but he sure as heck is a fan of Ozzie Knezovich, and is more than willing to completely ignore any facts that put Sheriff Ozzie in a bad light, the big question is WHY?

“Knezovich and Marske deserve credit for taking this step. It is another example of Knezovich’s approach to criticism and complaint; where some dodge or hide, he often tries to take questions straight and to take them seriously. There is nothing compelling either him or Marske to undertake such an effort other than a desire to address a public controversy in a public way.”

“Rather than come to the defense of one of their most widely popular elected officials, Spokane County Sheriff Ozzie Knezovich”

8 thoughts on “THE WIZARD IS NO MATCH FOR THE TRUTH!!!”