More about Ozzie’s long list of liars as Ozzie tries to continue his Power Point Presentation proving I’m among his elite group.

I must admit that the only time during this exercise in Buffoonery I came close to losing my focus was when Ozzie called former SPD Officer, and former Undersheriff to Mark Sterk, Larry Lindskog a liar. I have known Larry since we went through the Academy together. When Larry was on SPD he risked his life, and took a bullet in the gut trying to disarm a suspect in a way that no one would get hurt. I got my focus back by telling myself… Good! … If Ozzie wants to lump me in with folks like Larry Lindskog… I couldn’t be prouder.

You might enjoy Ozzie’s dance when it comes to the BAINBRIDGE ISLAND POLICE GUILD V. CITY OF PUYALLUP case.

Most of the Law Enforcement agencies in the State have the Bainbridge Island case down kind of Okay… which is another story…Ozzie not so much.

Whether the other liars Ozzie associates me with choose to move against the County and Ozzie is of course up to them, but Ozzie sure as hell wanted the Public to know that even though Wiyrick and Wright were never charged or convicted of anything he had to get it out there, as well as the unfounded un-sustained IA Cases of people he considers his political enemies. Interestingly in the IA Case that Ozzie tries to attach to Wiyrick and Wright neither Wiyrick or Wright were the ones that made the IA Complaint against Deputy Marske, who has since left the SCSO. The complaint basically alleged that Marske was dishonest in some of his reports, and perhaps  affidavits. The person who made the IA Complaint against Marske was a woman named Leslie Devlin. Wiyrick and Wright were merely witness in that case, and Ozzie tried to have the Prosecutor charge them with a crime. They were never charged let alone convicted, but Ozzie sure wants people to know all about it doesn’t he?

Ozzie for some inexplicable reason brings up an old email I had sent to him when Frank Straub was Chief and Craig Meidl was Straub’s Assistant Chief. Just so you know the link was regarding “Playing the Ozzie Card”, don’t know how warning him about Straub makes me a liar …heck I tried to warn everyone…but to no avail.

If you are into comedy you might enjoy Ozzie’s production regarding the email interaction we had after I received a voice message from him on Monday July 11, 2016 asking me to call. I wouldn’t of course for reasons that should be clear in watching the Ozzie/Buff Episodes. Heck I even provided him a link to the story he claimed he hadn’t read. You might notice that Ozzie wanted me to “Feel free” print one of his emails, which I did the following day.

Here is the actual email interaction: 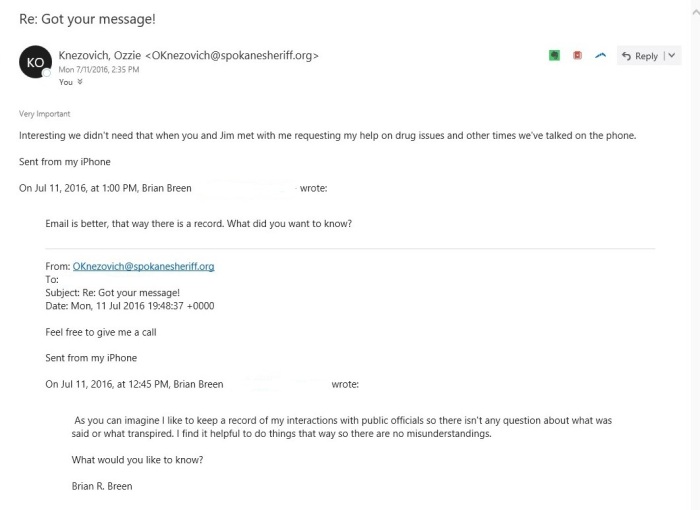 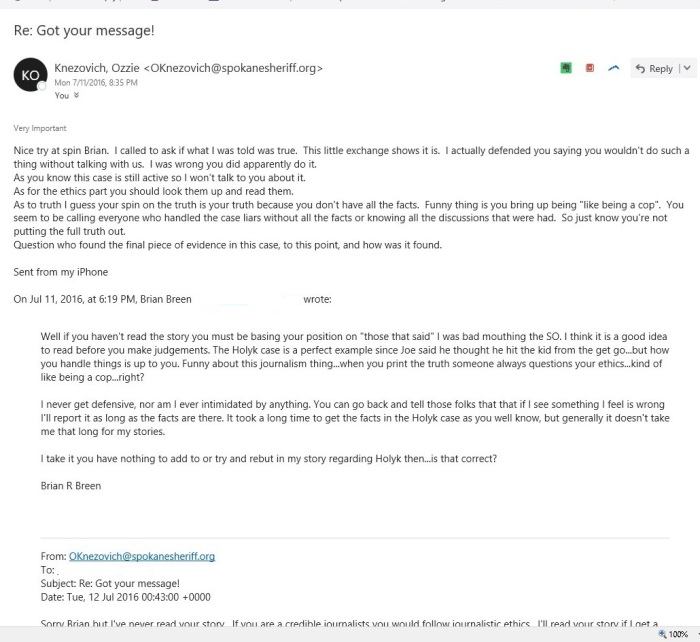 Ozzie stated in the Ozzie/Buff video footage that he had told me he couldn’t talk about the Holyk case because it was open. I missed that statement in the above emails, maybe you can find it.

In the last portion of the video Ozzie goes into all his training and expertise in dealing with the media, something I’m sure he will be training with his new business. The Ozzie/Buff Episodes would have to offer some great training material for his classes.

I REPORT HSS YOU DECIDE!!!!