One of the things Interim Chief Meidl brought up in our Q & A was his position that SPD is understaffed. The minute he made that statement, my response was, “Wait a second you are fully staffed at 300 and that is the highest staffing level SPD has ever had.”.

To add perspective, for folks that don’t know, there are now two fairly distinct factions within SPD. One faction believes that Straub’s various “Programs and Models” were for the most part “failures” resulting in “inefficient resource allocation”, “duplication of efforts”, “wasted time”, and “unnecessary overtime”.

The other faction I’m told consists of those individuals who want to continue the Mayor’s and Straub’s failed programs regardless of whether or not they are good for SPD or the City of Spokane. Meidl’s comment about being understaffed confirmed for me what faction he belongs to, along with Dobrow and Schwering. Many believe, myself included, that “Furniture-gate” was a result of the chasm that exists at SPD.

Meidl’s comment about an understaffed SPD lead to a discussion of Recommendation 10.5 made by COPS/DOJ.

The folks that follow me know that I have been harping on getting a staffing analysis done for years. Below is a link to some of my stories:

The Q & A revealed some interesting facts regarding Recommendation 10.5. SPD apparently did finally put out a RFP and have chosen a company to do the “Staffing Analysis”. But I have also learned that not all of the City Council, if any, are aware of this. What I thought was interesting was that Justin somewhat reluctantly told us that one of the consulting groups that responded to the RFP was none other than the Matrix Group who did a similar Staffing Analysis of SPD back in 2007. The Analysis done by Matrix was very critical of SPD. I might add that I have on many, many occasions referred to the Matrix Study. So it will be interesting to see what the new consultant will come up with.

Lundgren stated that the Staffing Analysis will take approximately six months to complete. Supposedly we will have a new Chief of Police by that time…so it could become interesting.

The discussion regarding the Staffing Analysis allowed me to segue into areas I think are important from a Citizen’s standpoint. CompStat and “Intelligence Based Policing” came up of course. Most folks know my position on the automated pin map, and the sales job accompanying it. But according to both Meidl and Lundgren SPD is at least considering bringing back the Accountability Information Management System, which we Citizens purchased, and Straub did away with. I feel that AIM was a far better tool for assessing how SPD is doing than CompStat ever was, because of the overall detail it provides. There are all kinds of accountability software available which can be tweaked to meet any Department’s needs.

Carly Cortright used to be responsible for the AIM Product and its dissemination to the Public. We all know PART of the Carly Cortright story and why she was transferred out of SPD. That by the way, was a big loss to SPD and just the tip of the iceberg regarding the “DFWF” (You can figure out what DFWF means.) issue.

I don’t know how many times I have been over this, but maybe now the new Public Safety Committee will finally take notice, so I’ll repeat some of it.

The links below are a copy of the last publicly available AIM data and the press release:

Given all the recent news stories about property crimes, auto theft, and SPD not investigating property crimes, there are a few things I would like to point out from the 2012 AIM Data, and also mention that even though we don’t have any current data to support it, sources indicate not much has changed.

Starting with the Targeted Crimes Unit, which by the way Rachel learned from Meidl is responsible for investigating the art stolen in this story she wrote. 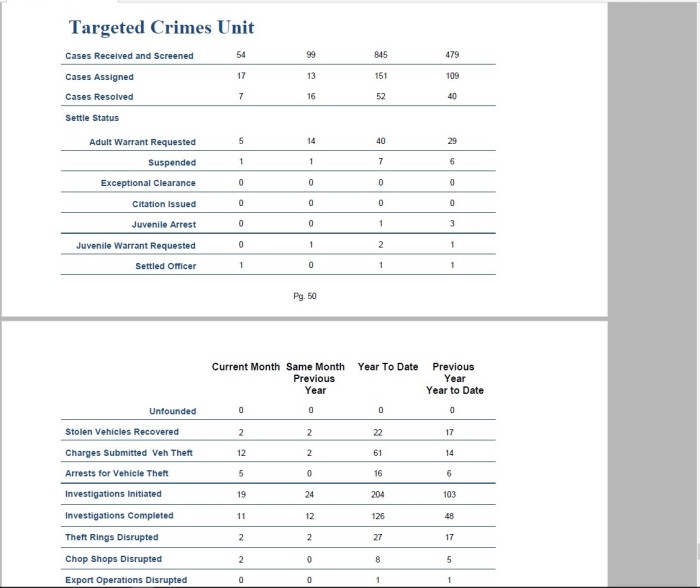 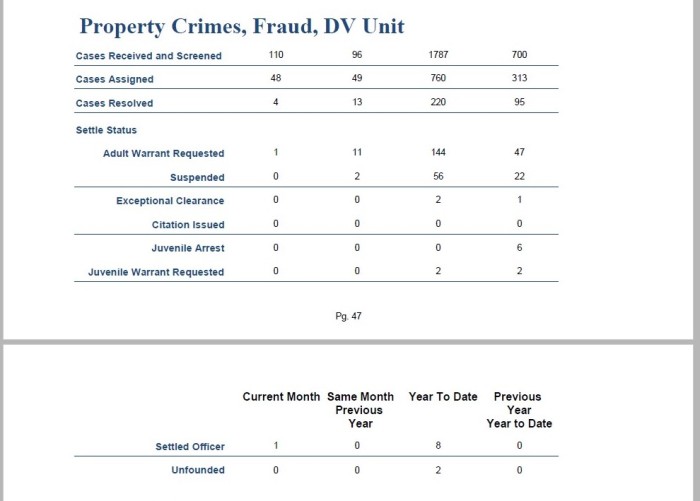 When you look at the Property Crimes, Fraud, and DV Unit you see a 2012 Case Flow of (700) cases, with only (313) being assigned for investigation. I should first point out that these three Units should have been separated to get an accurate Case Management Analysis…but they weren’t so we have to go with what we have. I don’t know exactly what the staffing level was for the three units in 2012 but I believe it was around (7) Cops total, which works out to a monthly caseload of (4) cases per month.

You might wonder why I went through the exercise above again…well it has to do with a response by Craig Meidl to a question I asked about the low caseload at SPD. Meidl told me that the reason the caseloads were so low is because it is a lot harder to investigate property crimes today than it was when I was a Cop because investigators had to spend more time searching data from places like Facebook, Twitter, Craigslist, and Pawn Records. I thought that was kind of strange in that I would think that all the social media, and data bases would actually make it an easier “gumshoe”, or maybe even no shoe at all.

I also wanted to point out what the Matrix Report stated, and for those that don’t care to read the entire Matrix Report, here is what it said about Property Crimes Caseloads.

I don’t know exactly what Case Management System SPD utilizes today but I do know that back in the day SPD sent some of us all over the place to develop a Case Management System that a lot of other Departments copied. It is hard to tell from the information available where SPD’s “Choke Point” is, but it looks like it is at the Unit Supervisory Level, which in my view isn’t good for a number of reasons. A “Choke Point” by the way, is the point at which a Department’s entire Report/Case Flow is “Choked” to a manageable number of cases to be assigned for follow-up. Generally, all cases with a “Solvability Factor” had to be assigned by Supervisors back in the day, if they didn’t they had a lot of explaining to do.

Another thing the AIM Data provided the Public was at least some idea of how much money, cars, and guns SPD was seizing. 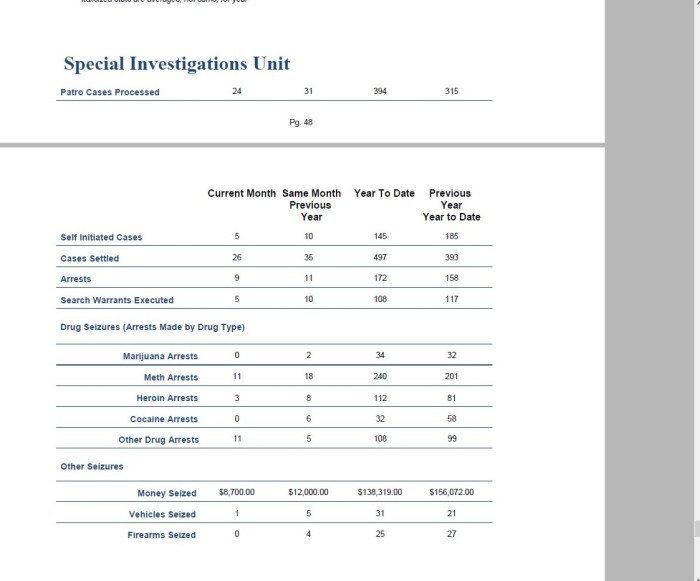 One other thing I wanted to show you, is a “Product” Carly Cortright provide to me when I was doing a volunteer thing with “The Retention Project”. The data she gave me was derived from her AIM Database. You can probably figure out for yourself why I wanted the data and what I did with it. It would be nice to see more “Products” like this from SPD.

I hope this was informative and some of the things I have mentioned in here should be covered by the folks doing the Staffing Analysis, which should also include the Patrol Division, as well as all the other Divisions at SPD, however many that is now.

5 thoughts on “A CONVERSATION WITH INTERIM CHIEF MEIDL AND MAJOR JUSTIN LUNDGREN…PART THREE!!!”