Time for an update. The games continue but now we have Pat Dalton from the City Attorney’s Office involved, apparently in an effort to discourage me.

So here is the Status.

On December 19th, 2015 I requested Ms. Pfister supply me with the affidavits I am entitled to under the Washington State Supreme Court Case Nissen v. Pierce County, No. 90875-3. Ms Pfister and I had been going round and round about the text messages and her responsibility to provide them. I did of course wait until the proper time to drop the Nissen bomb.

On January 6th, 2015 because I had not heard back from Ms. Pfister I requested an update on my affidavits. Not surprisingly the same day I received a response from Pat Dalton of City Legal (see below). 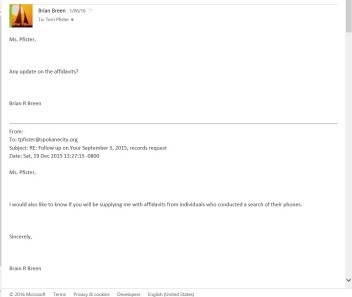 We affirm the Court of Appeals in part. Records that an agency employee prepares, owns, uses, or retains on a private cell phone within the scope of employment can be “public records” of the agency under RCW 42.56.010(3).Nissen’s complaint thus sufficiently alleges that at least some of the text messages at issue may be public records subject to disclosure. Because it is impossible at this stage to determine if any messages are in fact public records, on remand the parties are directed as follows. Lindquist must obtain a transcript of the content of all the text messages at issue, review them, and produce to the County any that are public records consistent with our opinion. The County must then review those messages just as it would any other public record-and apply any applicable exemptions, redact information if necessary, and produce the records and any exemption log to Nissen. As to text messages that Lindquist in good faith determines are not public records, he must submit an affidavit to the County attesting to the personal character of those messages. The County must also produce that affidavit to Nissen. We note that the County responded to Nissen’s records requests and produced records in a timely manner based on what we presume was its good-faith interpretation of the PRA. Though we now hold that interpretation is incorrect, penalties are not warranted at this early stage before the County has had the opportunity to comply with our opinion and supplement its response to Nissen’s requests accordingly. We reserve for the trial court the issue of penalties going forward.

This is the response I received from Pat Dalton. When you read it if it sounds like something a lawyer would write…I would say that is right on! 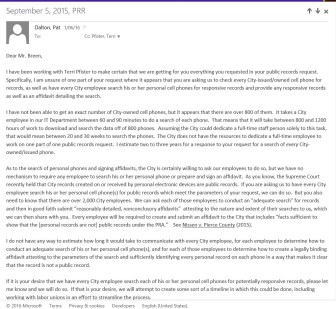 Here is my response to Pat Dalton and quite frankly it is getting somewhat boring have to list the very same names over and over again. 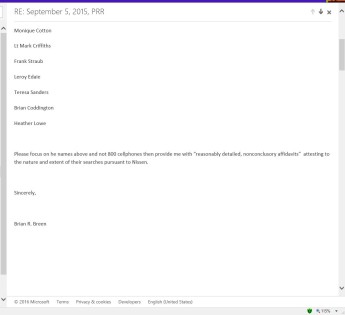 You might be asking yourself why it is important to me to obtain the affidavits I’m entitled to. The answer is simple. The Condon Administration knows the answer, and they know where I’m going in that regard.

So to answer the question…If the “Independent Investigation” into the Cotton/Straub and PRR issue is done properly because the Investigator has the authority to subpoena phone records, and take testimony under oath it will be interesting to see how the affidavits I receive, that is IF I ever receive them, compare with sworn statements, and records obtained during the course of the “Independent Investigation” …it is as simple as that.