The inlander published another good article today this time regarding Theresa Sanders.

The Inlander article outlined this information in the story so as I was the other complainant besides Tim Connor I thought I would add some perspective to Tim’s “She blew it off” statement.

But Heather Lowe, the city’s director of Human Resources, says she only heard about the complaints once they appeared in the media. “They were never turned over to me,” Lowe says. “I don’t even have a record of them.” Instead, Sanders informed both complainants that she was responsible for handling the complaints. They weren’t happy.

“She blew it off,” says complainant Tim Connor, formerly with the Center for Justice. “I gave her three witnesses. She talked to none of them.”

I’ve been blown off regarding my documented concerns about Frank Straub since he hit town, so I’m used to it. Some have stated that I must be ROFLAO, well admittedly I have had a few laughs but the truth is I’m actually mad, disappointed, indignant, and a lot of other things all rolled into one.

I anticipated being blown off by the Condon Administration and Theresa Sanders because I knew that ANY negative information surfacing about David Condon’s rotten choice of Frank Straub would be swept under the rug as quickly and quietly as possible. I was also concerned about being blown off by the Media and the City Council but felt there was some hope that despite their continued touting of the wonderful job Straub was doing once they started looking into the FACTS the TRUTH would come out…I was wrong…so here we are today with ALL the predictions coming true. To be very clear about my complainant “investigated” by Theresa Sanders, I didn’t stop with her, I emailed all of the City Council members with my concerns about the very, very, serious matter of Domestic Violence Reporting and included all of my documentation which clearly showed the need for a real investigation. The City Councils reaction was simply to ask Selby Smith, who provided them the same BS he had given to Theresa Sanders to try and cover Straub’s tracks…they of course bought it and did nothing.

Beyond the City Council I also supplied Nick Deshais of the Spokesman Review with all of my records and emails regarding my complaint…again nothing. The really unfortunate thing is that with all of the dishonesty now coming out no one has bothered to take an in-depth look at how SPD really does handle Domestic Violence reports and cases, and before David Condon even begins to try and point out the wonderful program Straub set up with Rachel Dolezal’s good friend and supporter Regina Malveaux…just a warning David…I’m ready.

BACK TO MY MAIN POINT…HOW DO YOU TELL?

It is pretty simple…you do a Public Records Request for all the documents concerning your complaint! I of course did just that and the records clearly revealed a “blow off”. I’m going to provide just a few of the blow off examples I found and hold back the rest, which clearly show that Theresa Sanders and Selby Smith were having a hell of a time trying to figure out how to deal with my request.

Theresa Sanders sent this email to Nancy Isserlis upon receiving my request that Sanders NOT investigate my complaint. Notice the blow off. What is troubling for me is the Isserlis response to Sanders.

Keep in mind this is the City Attorney reacting to an independent investigation request. 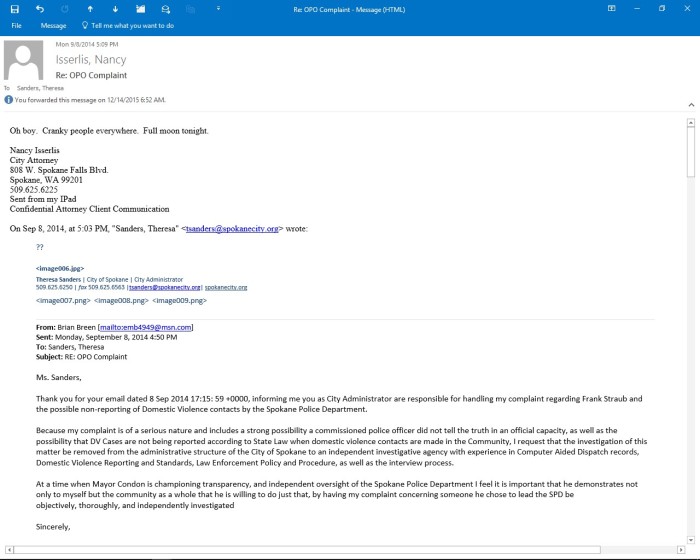 I would think that any Spokane Citizen, such as myself, would have an expectation that the City Attorney would read the complaint and request for an independent investigation, inform Theresa Sanders that legally she can’t investigate the case, and try and figure out how to properly handle the situation. Well of course in the Condon Administration those expectations are far too high and it gets even worse. The following emails between Sanders and Isserlis, pretty much speak for themselves.

Well there you have it folks just a snapshot of the big picture. As I’ve mentioned before keep in mind that the revelations coming out now, and the dynamic of Washington State Surpreme Court decisions regarding the Public Records Act will force government into the good ole backdoor closeddoor process of yesterday…not to worry folks…there are other ways! 🙂 🙂

One thought on “HOW CAN YOU TELL WHEN YOU HAVE BEEN “BLOWN OFF”?”