One of the primary reasons I do what I do is to expose the lack of ethics and misconduct that takes place every day in government, whether by a Republican, Democrat, or anyone else. When I do an investigation that includes public records many times I run across something which demonstrates an extreme bias, misconduct, and or a complete lack of ethics on the part of those who are supposed to serve the PUBLIC in an unbiased way. Given the amount of taxpayer time and resources Bob West spent electioneer for his daughter which included time spent researching the vaccination issue I felt it important to write this story to give my readers a peek at what goes on behind the scenes.

The City of Spokane’s internal investigation of Mr. West never would have happened had it not been for the fact that I followed up on a tip provided by sources, none of whom were Mr. Collier or members of the Collier family. The truth is Mr. West would likely still be employed by the City of Spokane had not evidence I obtained been brought forward.

Despite the fact that it may be an irritant to some I feel I should provide some context to this email which I posted yesterday on my Facebook Page.

This email should provide a little more context. 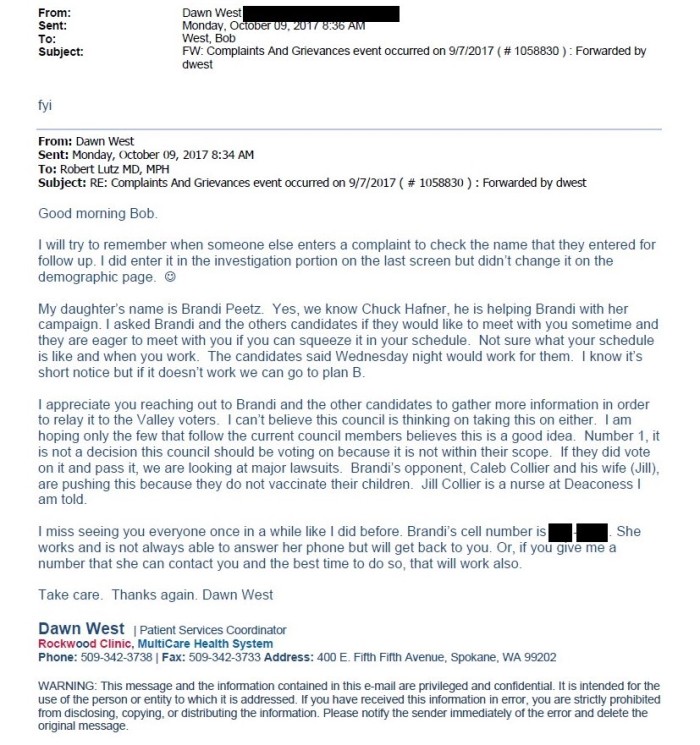 The above email gives the appearance that in his capacity as SCRHD Officer Dr. Lutz actually reached out to the Brandi West campaign, which is something the Spokane County Regional Health District Board should look into. The email speaks for itself.

In my view any reasonable person would conclude that Dr. Lutz’s email represents a bias and may represent a bias on the part of Charles (Chuck) Hafner the former Spokane Valley Council member who resigned that position apparently because of ideological differences.

“Soon we will have a City Council that’s all tea party, extreme-right people,” Hafner said.

I would like to do some more investigation on this issue however putting together documents to defend Prosecutor Larry Haskell’s Temporary Restraining Order against me as well as other investigations involving SPD are consuming a lot of my time, so I will have to, at least at this point, let some of the individuals directly affected by this issue carry the ball.