Here I go yet once again even though I said I wouldn’t!

Our very own Wizard strenuously objects to Governor Inslee’s Executive Order of February 23rd, 2017, a few days after the Armando Chavez Corona’s big deal. Apparently Ozzie is most frustrated with Item Number 9 of the EO which deals specifically with the WSP and State Department of Corrections folks (See Below).

Since the EO only applies to the State, Executive and Small Cabinet Agencies, and NOT the Spokane County Sheriff’s Office, I can only assume that Ozzie is trying hard to build his base for his next run at whatever political office he might run for. Inslee and Obama are of course Democrats and Ozzie is a… well… Ozzie is Ozzie. 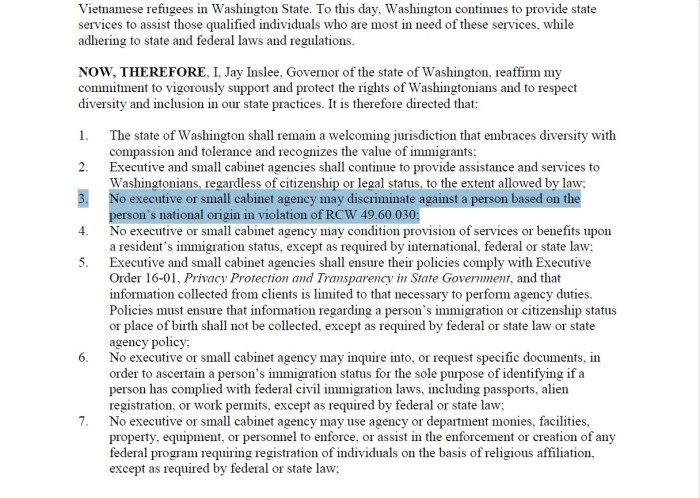 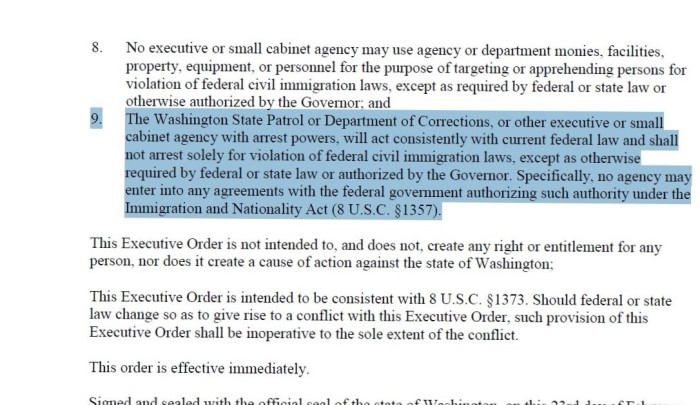 I am not going to go into another long dissertation regarding Terry v Ohio, and will only suggest that Ozzie attend his next Training Session on “Racial-or-Bias Based Profiling”, it might be good for him. 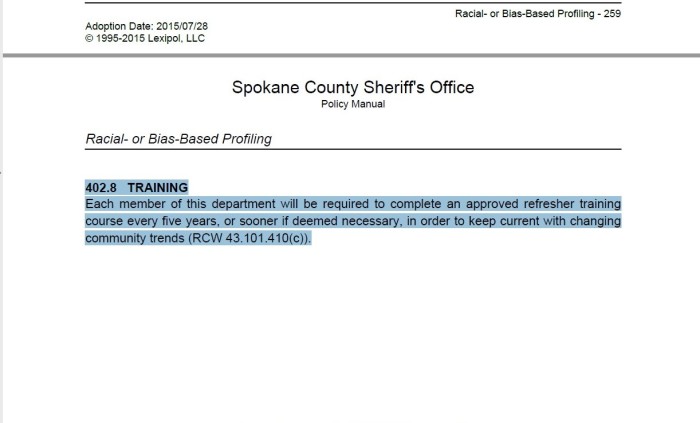 I guess the easiest way to do this is to compare Ozzie’s own Policy Manual Number 421 entitled “Arrest or Detention of Foreign Nationals” and his Policy Manual Number 402 entitled “ Racial- or Biased Based Profiling”. I am taking the two Policies out of numerical order because, the biggest hangup Ozzie seems to have is with Foreign Nationals who do not claim immunity and are defined in his 421 Policy. 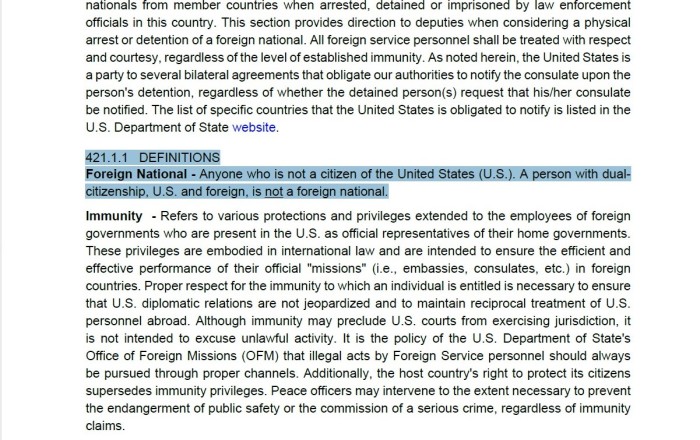 Since the definition of Foreign National is defined for us by Ozzie, the question then becomes… What does Ozzie require his Troops to do if during a Terry Stop they have someone whom they have reasonable suspicion is a Foreign National? 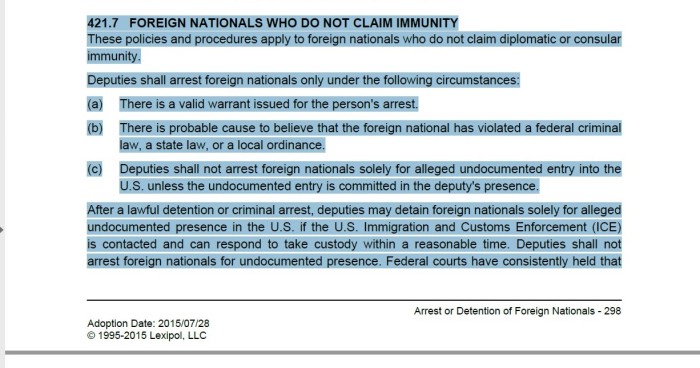 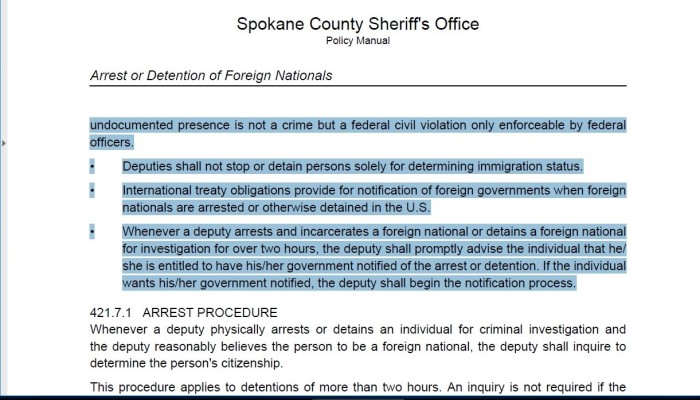 There are some things you might notice regarding Ozzie’s own Policy in trying to deal with the Massive Illegal Alien Problem in Spokane County.

First, despite the fact Ozzie likes to throw around all the “illegal alien” verbage he actually admits that “Federal courts have consistently held that undocumented presence is not a crime but a federal civil violation only enforceable by federal officers.”

Second, Ozzie’s policy specifically prohibits his Troops from stopping or detaining someone solely for determining their immigration status. “Deputies shall not stop or detain persons solely for determining immigration status.” Pretty simple concept; Ozzie doesn’t want his Troops out there detaining people on civil matters despite the Massive Illegal Alien Problem in Spokane County, which makes sense to me considering Ozzie told me during his effort to prove me a liar that he is down 14 staff.

Third, as Ozzie points out “International treaty obligations provide for notification of foreign governments when foreign nationals are arrested or otherwise detained in the U.S.”   Now that could be a heck of a problem for Ozzie’s Troops on the Graveyard or Swing Shifts, especially if the person is from say for example Turkey.

Fourth, Ozzie in accordance with the case-law associated with Terry v Ohio and Treaties puts a two-hour limit on how long his Troops can go before they have to provide the required Government Contact warning to the detained individual, “Whenever a deputy arrests and incarcerates a foreign national or detains a foreign national for investigation for over two hours, the deputy shall promptly advise the individual that he/she is entitled to have his/her government notified of the arrest or detention. If the individual wants his/her government notified, the deputy shall begin the notification process.” It sure looks to me like Ozzie has specifically attached a lot of time-consuming requirements on his Troops to deal with our massive problem.

Let us look at Ozzie’s requirements for when one of his Troops arrests or detains an individual “for criminal investigation and the deputy reasonably believes the person to be a foreign national,” 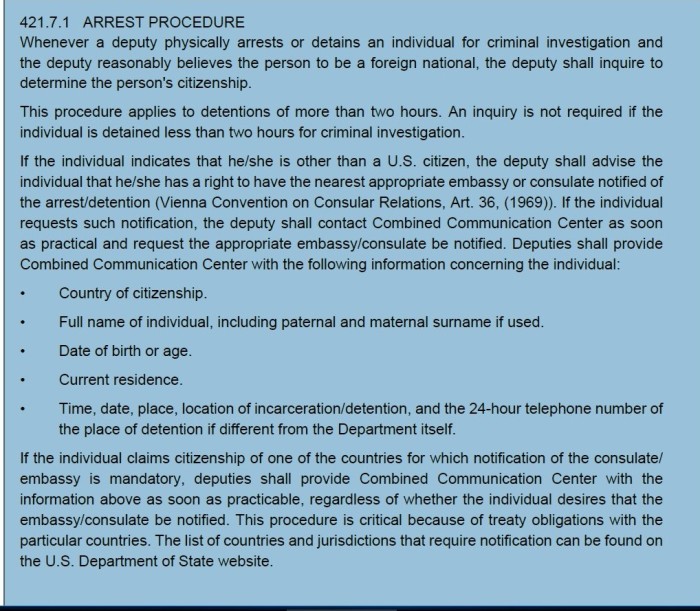 Ozzie’s Arrest Procedure is pretty self-explanatory, but what I would like to point out is that unlike SPD WSP Troopers and State Corrections folks , Spokane County Sherriff Deputies are required by Ozzie to determine the individuals citizenship; “the deputy shall inquire to determine the person’s citizenship.”

The truth is Ozzie was elected the Sheriff of Spokane County, and as he has pointed out several times he can do what ever he wants, he can make Policy, break Policy, and of course interpret his own Policy, it is entirely up to him. But by the same token Ozzie points out in his Holyk Deposition that “There is ambiguity in all policy.” 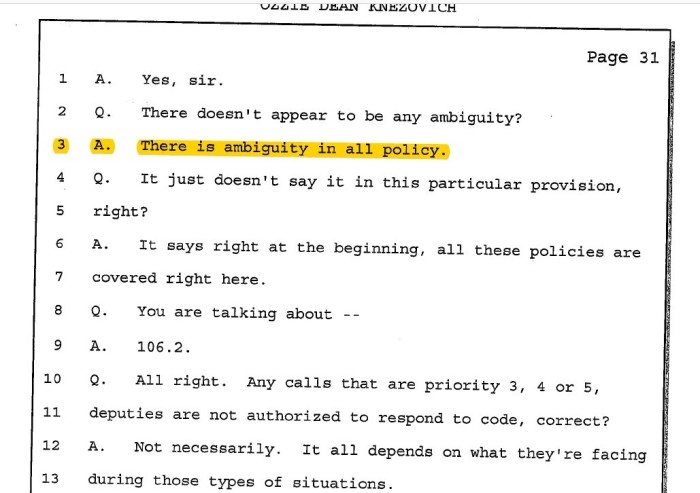 But you have to understand that “ambiguity” is a situational thing for most law enforcement administrators.

This is the section of Ozzie’s Policy 421 I dislike the most! 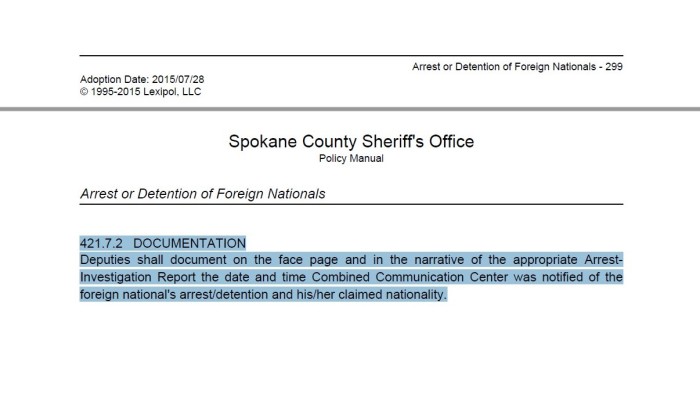 I think it is probably pretty easy to figure out why I don’t like 421.7.2. Obviously IF Ozzie’s Troops are following his Policy it shouldn’t take Spokane County too long to respond to a PRR which would show just how Massive the Illegal Alien Problem is in Spokane, and how costly and time-consuming that problem actually is. I wouldn’t hold my breath for Ozzie’s friends at the Spokesman Review to do it even though Rob Curley started this thingy.

So that leaves primarily just two other Media Sources, The Inlander, and Me, so we shall see!

Having taken the time to go through all the above we should see how it compares with Inlee’s Executive Order:

* “Federal courts have consistently held that undocumented presence is not a crime but a federal civil violation only enforceable by federal officers.”

* “Deputies shall not stop or detain persons solely for determining immigration status.”

* “International treaty obligations provide for notification of foreign governments when foreign nationals are arrested or otherwise detained in the U.S.”

* “Whenever a deputy arrests and incarcerates a foreign national or detains a foreign national for investigation for over two hours, the deputy shall promptly advise the individual that he/she is entitled to have his/her government notified of the arrest or detention. If the individual wants his/her government notified, the deputy shall begin the notification process.”

* “for criminal investigation and the deputy reasonably believes the person to be a foreign national,”

* “the deputy shall inquire to determine the person’s citizenship.”

It looks to me like both Inslee and Ozzie agree they don’t want their Cops arresting people solely for determining an individuals immigration status. Inslee however adds the caveat “except as otherwise required by federal or state law or authorized by the Governor.” Which I interpret as meaning Inslee wants his Troops to follow State and Federal Law and get his permission for MOUs between ICE and Border Patrol to do Immigration Sweeps. “Specifically, no agency may enter into any agreements with the federal government authorizing such authority under the Immigration and Nationality Act (8 U.S.C. §1357). I don’t see anywhere in Inslee’s EO where he prohibits his Cops from contacting ICE, unless it was written in invisible ink.

Ozzie buddy, I don’t get your beef! The Gov can do what he wants and you can do what you want to… remember we talked about that???

Ozzie seems to have his panties in a big bind causing a great state of stress and frustration over what has been reported as a review by WSP of a Troopers actions.

Now that is really amazing to me since Ozzie’s own Policy Number 402 requires a review when his Deputies are involved in a contact which by definition involves “national origin”. 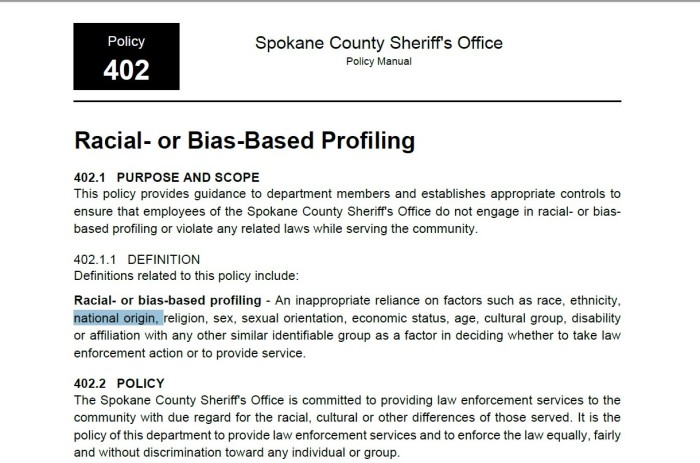 I’m not sure how the WSP does their own reviews, but here is how Ozzie requires it to be done: 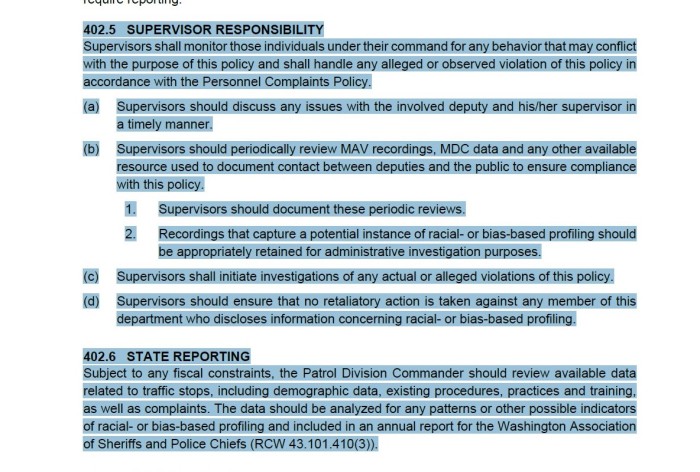 Here is what Ozzie is supposed to be doing: 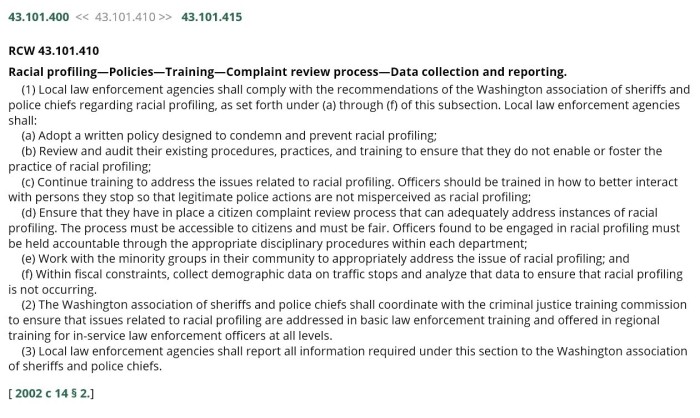 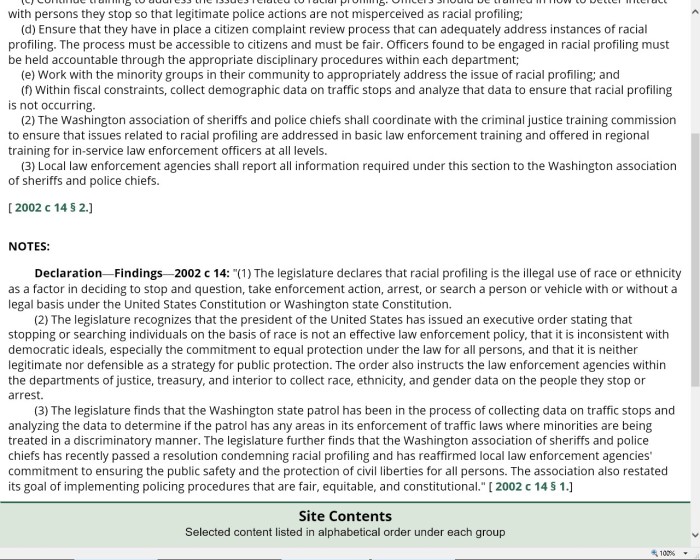 I’m sure all you political following folks know that George W. Bush was President in 2002!

Again I could go into great detail how Terry v Ohio relates to Ozzie’s Policies… but I won’t.

I’m sure when Ozzie reads this story he won’t like this one either… but hell Ozzie they are your Policies, not mine!

I Report HSS YOU DECIDE!!!