Along with requesting comment from Mayor Condon I also requested comment from the entire City Council. Council President Ben Stuckart did respond with a copy of his press response to Condon’s press release.

This paragraph in Stuckart’s release has some merit, but will likely never happen because it would provide the investigator far too many leads that would get to the truth. Lets be clear, an Investigator not documenting Attorney Client Privilege in their report is an everyday occurrence. My reports, when on the defense side, never included ACP however I was always provided investigative leads from information provided via the privilege.

“On Friday, May 27th and again, on Monday, May 30th I asked Mayor Condon to meet with myself and the investigative committee to discuss the possibility, suggested by the committee, that the City hire Michael Harrington as special City Attorney for the investigation. This solution would not require the waiver of attorney-client privilege. In fact, it would allow documents to be released to the investigator, who would be retained by Mr. Harrington, under the protection of attorney-client privilege. Meanwhile, Ms. Cappel would write her report, which the Council could decide to release to the public. Only if the independent investigator decides that attorney-client privileged documents are relevant to and add to her report would she then use those documents in a later, supplemental report. The Council would then have to determine whether to release that supplemental report as well.”

The Stuckart press release was prepared this AM, so it will be interesting to see if Kip Hill chooses to update his story and do some more work on it.

Sooner or later the entire City Council has to realize that there will be only one option left for them or this thing will be strung out until the end of Condon’s term.

This very poorly done May 31st, 2016 story written by Kip Hill of the Spokesman Review clearly demonstrates how Mayor Condon is using his close relationship with the SR to plead his case that the investigation into his bungling of the Cotton/Straub case is a political hatchet job. Of course there is politics involved in this…there always is in any investigation of government misconduct, that is the way our system works, and politics always get in the way of the public learning the truth.

Condon of course is doing everything possible to keep the public from knowing the full truth behind the Cotton/Straub case which if it came out would seriously hurt his further political ambitions. On the other hand, Stuckart is taking every advantage of Condon’s blundering to further his political ambitions…so what’s new? Nothing…really it is the same game played day in and day out throughout America.

Some key factors to remember is that the Cotton/Straub case isn’t the only Condon Administration Blunder there are of course many more; Lynden Smithson, Lydia Taylor, Brad Arleth, Carly Cortright, Scott Chesney, Nancy Goodspeed, Liane Carlson, Sonya O’Brien, Rachel Dolezal, Melisa Nystrom, and on and on. One of the things you can pretty well be assured of is that you will never see all of Condon’s personnel blunders appear together in a Spokesman Review Article…after all the SR endorsed him and of course the Cowles Family are some of his biggest campaign contributors.

One of the funny thing in Hill’s story is the link to the letter Condon provided to all the media, which gives a pretty good picture of what in going on with the political games and the cover-up.

This paragraph says it all:

So the Mayor has his side doing PRRs and reporting the responses to him. Or did the Mayor’s lawyer submit the PRR? Was it Condon’s good buddy Michael Cannon again? Where did the Mayor get the information from the PRR? Those are questions any good investigative reporter would ask, so I will ask the Mayor, but keep in mind the Mayor never responds to me, nor will he grant me an interview so I will likely have to do another PRR to find out who submitted the PRR.

It will be interesting to see if the Mayor answers, or whether I have to bother Ms. Pfister again. Either way we likely will get an indication of just how political the cover-up and investigation into the cover-up has become.

Please keep in mind that part of Chris Cappel’s contract is to look into the rotten job the City of Spokane does with PRR requests, something Kip Hill neglected to mention so I will. Here is just a little background on how hard the Condon Administration is trying to keep the truth from becoming public.

How is the Attorney Client Privilege Game played with the Public in Spokane? Well this should give you an idea, I think I have covered it pretty well previously.

Is it unprecedented to have another party review Attorney Client Privilege Issues? Hell no it isn’t! I agreed to have the City Hearing Examiner review the City’s claims of ACP in two of my PRRs. 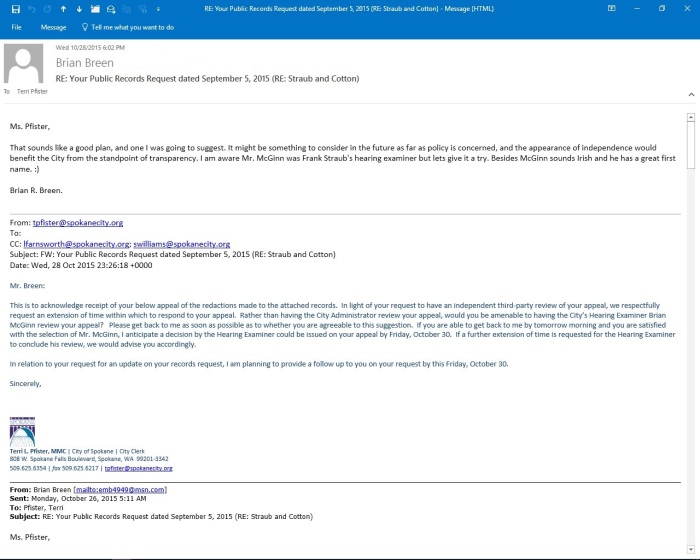 I won’t get in to the City Hearing Examiner being “independent” issue…that is a whole other story. Unfortunately, because this case involves a local issue the State Attorney General’s Office of Open Government Office refuses to get involved.

The FACTS are and the TRUTH is that there is only one way to resolve issues regarding PRRs or Discovery and that is through the Courts, in many cases all the way to the Washington State Supreme Court. The Cowles family doesn’t fight anymore so don’t count on them. Council President Stuckart, either crap or get off the pot, I’m guessing the Community is as tired of reading the Subpoena Threat as much as I am…just do it and let the Courts decide or forget about it.