When I read this in the Editorial, I had a big laugh regarding this sentence; “The timing is unprecedented.”

“It was the transfer of the recommendations to Spokane County Prosecutor Larry Haskell at the conclusion of the investigation that triggered release of the video and documents to the public. The timing is unprecedented.”

The statement by the Editorial Board is true to an extent, the timing and release of Public Records which includes body camera video is “UNPRECEDENTED”, but only in Spokane. The reason it is only unprecedented in Spokane is because every other media outlet in the State of Washington has taken advantage of the 2013 Washington State Supreme Court Case Decision in Sargent v. Seattle Police Department but the Spokesman Review since the Sargent Decision has done nothing to force the Spokane Police Department to turn over our Public Records once the case went to the prosecutor, and that is the only reason the timing for this case is “unprecedented”.

This was another laugher for me;

“Now, the department will release the results of investigations into officer-involved shootings as soon as those materials are handed to the prosecutor, at which time it will launch its internal investigation.”

When I read that and after watching Schwering’s press conference I laughed and thought Gosh how nice it is that SPD will now be following the law.

Here is the Washington State Municipal Research and Services Center’s synopsis of the Sargent case, and I provided a links below the synopsis to the actual Decision.

Sargent v. Seattle Police Department, 179 Wn.2d 376 (2013) Sargent was arrested for the assault of an off-duty police officer. Since Sargent was jailed, materials were transmitted to the prosecuting attorney for an expedited review and charging. The prosecutor, however, declined to file charges and the case was returned to the police for further investigation. Later the file was submitted to the city attorney who also declined to file charges. Sargent requested the investigative files, including an internal investigation file. Sargent’s records request was denied by the city, which argued them exempt for effective law enforcement purposes. Sargent sued. Following earlier proceedings, the supreme court considered the issue and, in a 5 – 4 decision, mostly supported the release of the documents to Sargent. The court held that the effective law enforcement exemption ceases to apply categorically to investigative records once the case is first referred to a prosecutor for a charging decision. The court also held that the city violated the PRA by withholding records of an internal disciplinary investigation. Since the effective law enforcement exemption does not apply categorically to this type of material, the exemption might be applicable, but the city would need to demonstrate that disclosure would endanger a person’s life, physical safety, or property, or that a witness had requested nondisclosure.

Some might wonder if the Spokesman Review as well as the SPD were somehow so inept that they were not aware of Sargent v. Seattle PD. The answer is simple…   “Hell yes they were aware!”

This Editorial appeared in the SR on December 22nd, 2013 after the Sargent Decision came down. In the 2013 Editorial the same three individuals Cowles, Caldwell, and Crooks try and stroke the current SR for a 2001 case brought by the old SR, so where have they been?

But it goes far beyond just the 2013 SR Editorial.

Over and over…including several emails to reporters regarding Sargent v Seattle Police Department. 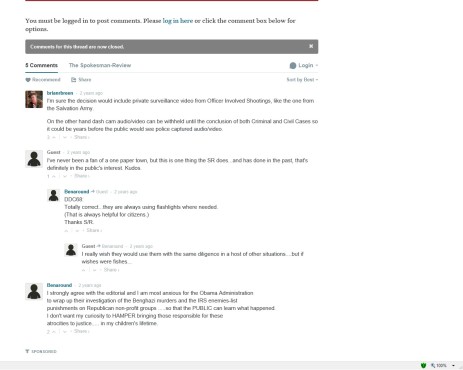 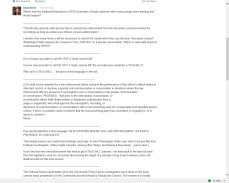 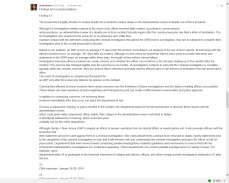 Now the question is, “Was the Spokane Police Department aware”? The answer…  “Hell yes they were aware!”

SPD was aware even prior to the Washington State AG’s Opinion answering my questions regarding Body Worn Cameras.

Brief Answer: In order to use a recording as evidence in a criminal or civil case, the recording would be subject to the same laws and rules governing all evidence, including the requirement that the chain of custody be established to prove no tampering has occurred. Record retention schedules would also govern how long a recording must be kept. Recordings and records about the recordings would be subject to discovery, as well as the Public Records Act and its exemptions. In establishing body camera systems, agencies should therefore give significant thought to how to categorize and store recordings.

With regard to disclosure, recordings and records about recordings from police cameras are subject to both the Public Records Act and discovery. See generally Fisher Broadcasting­ Seattle LLC v. City of Seattle, 180 Wn.2d 515, 326 P.3d 688 (2014). In establishing body camera systems, agencies should therefore give significant thought to how to categorize and store recordings. Restrictions on public disclosure of investigative records would apply to the extent that a recording meets the requirements of that statute. See RCW 42.56.240. Moreover, the Public Records Act permits public agencies to give notice to a person that a requested record pertains to, so that he or she can seek an injunction prohibiting disclosure. RCW 42.56.540. As explained below, however, specific restrictions on disclosure of video from vehicle-mounted cameras would not apply to body-mounted cameras absent a change in the Privacy Act.

The reason I formulated question (4) the way I did was in anticipation that the AG would separate Body Camera Video from Dash Cam Video in the next question (5) which he did. The Dash Cam Exception allows law enforcement to withhold Dash Cam Video “until final disposition of any criminal or civil litigation” if the civil or criminal case is legit and not a ploy not to disclose it. So I wanted to make sure the Body Camera Video was subject to the regular conditions of the Public Records Act which makes them public once the case goes to the Prosecutor and the private citizen as well as the media are entitled to them.

Here is the kicker Mary Muramatsu the legal advisor for SPD new damn good and well that once the criminal investigation was complete and it went to the prosecutor the video had to be released. I’m sure she read the Sargent case and knew as well as I did exactly what it meant.

This is what Muramatsu wrote in her comments to the AG way back when the AG was researching the answers to my questions. Notice she uses the term “may be released” which is accurate to the extent that the strict standards established by the WA State Supreme Court for the effective law enforcement exemption must be met. In other words, it is pretty darn hard to make a case for exemption.

At what point can the video be released?

This is the completely laughable video of SPD’s press release regarding the Body Camera Video release. Notice Tim Schwering admits in the press release that SPD has continually violated the Public Records Act up until this release. The reason they have been able to get away with it is because no individual or media outlet has pushed it, perhaps the fear is someone now will push it.

If you think about it…what a great time with all the adverse publicity to come out and now say…we are going to play fair from now on…okay if you say so Tim.

Has anyone noticed the SR Editorials no longer allow readers’ comments? I wonder why?

2 thoughts on “WHOSE SIDE IS THE SPOKESMAN REVIEW REALLY ON?”