The Pacific Northwest Inlander published a great story covering the Cotton/Straub case today which even included statements from a labor law attorney on how this matter should have been handled. Kudos to the Inlander!!!

The quote from the Inlander article regarding “a citizen emailed the media” I suspect may be in reference to the email I sent to the Inlander which included a copy of an anonymous letter I had received in which the writer alleged a conspiracy on the part of the Spokesman Review to withhold the Cotton/Straub story until after the election. There is a copy of the letter in my previous article linked below. I have covered the anonymous letter a number of times and that coverage clearly demonstrates why I am persona non grata with the SR.

What I find refreshing in the Inlander story is, whether it was my email or not, the Inlander Reporters followed the lead and actually did some good investigative work. The Inlander story has to be embarrassing for the Spokesman Review since I provided them with the same letter prior to the election, and they did absolutely NO reporting. At the time I received the anonymous letter I was also aware that in November of 2013 Addy Hatch of the Spokesman Review had spiked a story on Frank Straub that would have brought a lot of these issues that are coming out now regarding Straub forward and may very well have prevented this mess.

Another quote from today’s Inlander story is quite telling in that the Inlander got some of the ball rolling even though the SR obviously had much more information than they did and enough info for a story back in August as evidenced by this August 18th PRR submitted by Nick Deshais one month prior to the September 18th date.

As I have mentioned before Addy Hatch has stated that Nick Deshais submitted two additional PRRs regarding the Cotton/Straub issue a few days after the August 18th request. IMO, and that of other journalists, the SR had lots and lots of information in August. They also according, to today’s Inlander story, had an email from Cotton denying a relationship between her and Straub. Keep in mind this is well before the election. Also note Brian Coddington a former Spokesman Review employee directly contacted the publisher of the Inlander in an effort to “actively”, “deter the Inlander from looking into the rumors”. That is significant from the standpoint of the anonymous letter I received and provided the SR and later the Inlander which alleged a deal had been made between the SR and the Condon Administration to hold the Cotton story until after the election. The question now is, did Coddington or someone else in the Condon administration also contact the publisher of the Spokesman Review. If you have been following my articles regarding the PRR I made to the City you will see that is one of the questions I have been trying to answer, however the City is still making every effort to block disclosure. I could end up with a big chunk of your money folks by the time this is over and if I do after the lawyers are taken care of I will donated the rest to the Vanessa Behan Crisis Nursery (a murder case of mine).

Nevertheless, rumors concerning Straub’s relationship with Cotton continued to circulate at City Hall. In mid-Septmber, a citizen emailed the media, alleging an inappropriate relationship between the two. Cotton responded on Sept. 18 with an email to media outlets, saying the rumors were “completely inappropriate, libelous, slanderous, unethical and untrue.”

In the days following Straub’s ouster, Coddington actively sought to deter the Inlander from looking into the rumored issues, calling a reporter a “gossip columnist” for asking to speak with Cotton about them.

“Monique’s move to parks was strictly managerial,” he said then. “End of story.”

Coddington also took the unusual step of calling the Inlander’s publisher to complain about reporters’ questions.

As an update there are screenshots below of my most recent email to Terri Pfister regarding my PRR. Ms. Pfister is of course a major player in the Condon/Cotton/Straub issue. I have not received any response from Pfister, if she is smart she will follow my advice and turn the entire PRR matter over to the Washington State Attorney General. 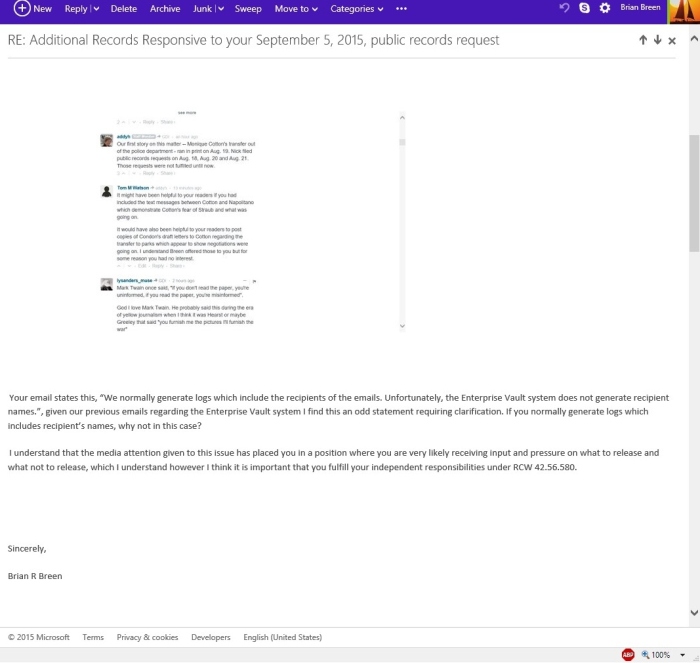 One thought on “EXCELLENT COVERAGE BY THE INLANDER ON COTTON/STRAUB”