This article appeared in today’s Spokesman Review, but left out some important information regarding Washington State’s “government openness”.

As an example, a recent WSSC decision makes messages from private phones or email accounts of public officials that involve the conducting of public business PUBLIC RECORDS which the public has a right to see.

Here is a pretty good synopsis of the case if you don’t wish to read the entire case.

As I type this blog post Public Officials all over the State, and especially here in Spokane as a result of my recent FOIA, are trying to figure out ways to evade the Lindquist decision. The Lindquist decision does have its drawbacks for the public however as public officials were quick to realize the need to revert back to pre-technology days when decisions were made and secrets kept by meeting face to face (no more smoke filled rooms though).

You might ask…so what is the problem. The answer is pretty simple and is alluded to in Jim Camden’s article.

Most were graded down for public access to information and ethics enforcement, he said in an emailed response to a question about the fairness of a system that has such low overall grades.

“The majority of states have serious deficiencies in those areas, such as open records laws riddled with exemptions and no entities tasked to oversee compliance with those open records laws,” he said.

The fact is in Washington State there is NO “ETHICS ENFORCEMENT” when it comes to State and Local Agencies violating or obstructing the PRA. The only option for private citizens or the deeper pocket media is to take their PRA case to court with hopes of recovering attorney fees and relatively small amounts of fines from the violating public agency. Ironically the attorney’s fees and fines are paid using public money. There was a time when citizens could count on the Cowles Family and the Spokesman Review to battle it out in court for them and many of the leading PRA cases in this State were initiated by the Spokesman Review, something Jim Camden should well remember. Unfortunately, that is no longer the case, primarily because Stacey Cowles has gutted the SR to the point they are no longer what they were at one time. As an example SR Public Records Requests now have a caveat at the end of the request to let the agency know if fulfilling the request will be in excess of $150.00, which in and of itself is very telling.

Most people aren’t aware that the Washington State Attorney actually has an “Open Government Ombudsman” whom I have found to be quite lacking from the standpoint of the FOIAs I have been involved in, and there is a conflict of interest with the AG when seeking records from State Agencies.

In reality the question of ethics boils down to the ethics and integrity of the individual who within the public agency is appointed the legal responsibility for responding to public records requests. They have a choice of yielding to the pressure they receive from within or doing what is right and fulfilling their responsibilities.

As many people know I’m in a battle on my own with the City over public release of the Cotton/Straub case (not my first Rodeo) and the City is making every effort to hide the facts so I thought I would post some examples of what the average citizen has to go through to get to the truth. 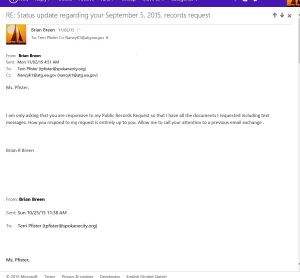