It is very unlikely that the average citizen has ever seen or read an SPD DFRB finding or has even be able to catch a glimpse of what goes on in the “Review” unless you were able to read the Use of Force Commission Report including the Appendixes which have been removed from any UOFC Report documents available through City of Spokane websites. With respect to the DFRB please take a close look at Appendix “D” in the Use of Force Commission Report (link to full report below). The Spokane Police Department’s “Deadly Force Review Board” (DFRB) Policy is provided in the media below for your review.

It is important to understand that SPD as well as the Spokane County Sheriff’s Office are not unlike most law enforcement agencies and are vey reluctant to make public DFRB findings primarily from a fear of the findings opening the door to civil litigations if honest and ethical reviews are conducted. Law Enforcement Agencies also are very reluctant to make DFRBs public as they, again if conducted honestly and ethically, many times demonstrate serious problems within the agency. As a general rule in Spokane DFRB findings are only available via civil litigation or FOIA.

The Spokesman Review has a link to updates regarding what SPD is doing to implement the COPS/DOJ Recommendations however I strongly feel the SR is missing opportunities to better inform the public while at the same time test the new SPD Administration’s transparency and at the same time determine if the “untruthfulness” they complained about regarding Frank Straub still is a problem.

COPS/DOJ Recommendation 8.7 (below) is very important from the standpoint of SPD transparency, public insight, oversight, and of course fulfilling the medias “Fourth Estate” responsibilities. The questions the media should be asking are obvious: 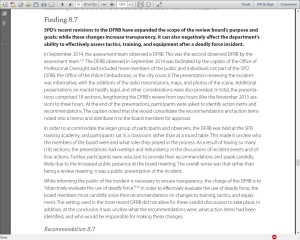 2 thoughts on “Deadly Force Review Board Findings. Have you ever read one?”